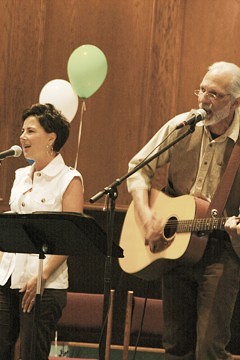 With his gray ponytail, vest, faded jeans and mellow personality, it’s not difficult to believe that Greg Beumer was a hippy in San Francisco during the sixties. Forty years ago, God got ahold of his life through a woman who brought food without judgment to Greg and his starving musician buddies, and for over 30 years, he’s been performing a similar service at the Union Gospel Mission. Only Greg brings music instead of food. With his low, Johnny Cash-like voice, he presents a clear gospel message through song, and when he speaks, his compassion resonates. After singing, Greg often takes the microphone out into the crowd to hear what God is doing in people’s lives and prays with them. Asked why he keeps coming, Greg replied, “I just can’t not do it…It’s a blessing.”

Greg wrote a song especially for the men at the Mission, “The East Door.”

Comin’ in thru the east door

Just off the road

The backpack on his back was packed

With a heavy load

An old friend had told him

Hey, when you get to town

Take the road, go across the river

And that’s where the east door’s found

And you go in through the east door

Go in through the east door

He found his way to the east door

And had to open it real wide

That oversize pack of life on his back

Was hittin’ the jambs on both sides

He sat down in the room

And was startin’ to feel warm

He’d left the bitin’ cold of life outside

He’d found a port in the storm

And he figured he could sit a spell

And get a bite to eat

And then his plan was movin’ on

Back down the street

He’d come in through the east door

Life had thrown some twisted tricks

On the travelin’ man

The cards that he’d been dealt

But he had himself a tattoo

Said he was born to lose

And he was doin’ his best to live up to it

Tryin’ to walk in those shoes

And there were parts of him that were missin’

And parts that were left out

And some things from early in life

He didn’t want to talk about

He’d come in through the east door

He started takin’ off his backpack

He tried to set it down

That’s when he heard the bell ring

For the start of another round

All that weight he’d carried round

And the pain he held inside

Stuffin’ himself as full as he could

With what he called life

The wrestlin’ match was on the floor

They’s rollin’ round and round

They’re strugglin’ to get control

Of what’s lost and what’s found

Come in through the east door

And the travelin’ man was losin’

He was goin’ down real hard

He didn’t have an ace up his sleeve

In his deck of back pack cards

He was goin’ down for the last time

He was about to take the count

When from the other side of the east door

A hand reached out

Oh, yes, the Spirit was a movin’

It tapped him on the back

And whispered, hey, I brought you here

And I know you’re under attack

And I’ve been tryin’ to get your attention

And I’ve been trying to get you to see

I’ve got a better plan for your life

He come in through the east door

He come in through the east door

Interested in providing chapel or getting your church involved in some other way? Click on the link below for more information. 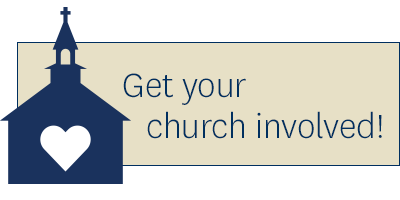 Click here to see all articles for the April 2012 issue.