UGM Careers: How Nick and Kristen Became Part of the UGM Family

For years now, we’ve signed our emails from “The UGM Family.” But what do we mean by that? Who is in this family, and how does an organization with a staff of more than 200 feel like home to so many? Nick and Kristen are married staff members who’ve experienced UGM as a safe haven and become integral to the home-like environment at the Mission. Here’s their story.

“My mom and stepdad were musicians and marijuana growers.” Kristen grew up lonely. Up until the age of 11, she wasn’t allowed to have friends, and for a couple years, she and her family traveled the U.S. in a van. And then her stepdad died in a car crash, under the influence. “That’s when my mom started to want to change,” she told us. But Kristin was already experimenting with marijuana and cigarettes. When she entered public school for the first time at age 12, she experienced culture shock. She was years behind her grade and didn’t have any support. She started running away from home, drinking, and partying with an older crowd. At 13, she was introduced to meth, intravenously. “And that changed my whole world. I was addicted straight off the bat.” From that age until her late twenties, Kristen was in and out of jail and, as she says, “Looking for love in all the wrong places.”

In 2009, she made her way to UGM’s Anna Ogden Hall, ready for help. She had CPS cases involving her older children and a baby she was desperate to keep. At UGM, she found a community that welcomed her. She stabilized there and eventually transferred to Shepherd’s Door in Portland where she was able to complete a recovery program and work through her court cases. Upon graduation, she got a job at the UGM Crisis Shelter, which led to opportunities at the Thrift Stores where she worked her way up to assistant manager.

She stayed with a host couple while she got on her feet. That’s where she met Nick, their son. 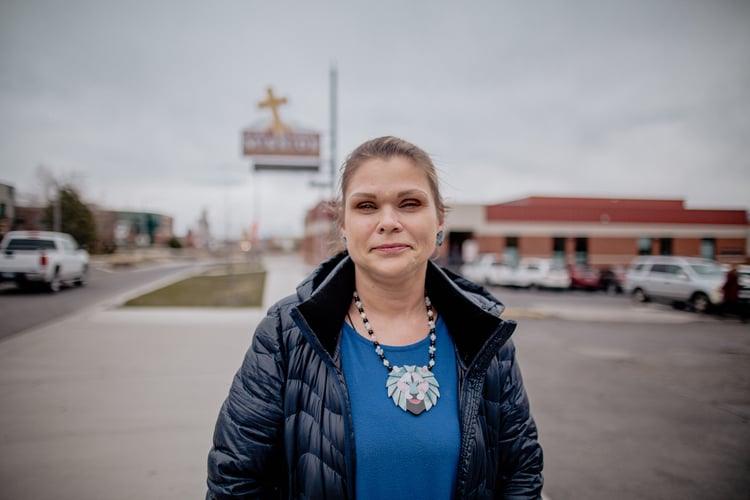 Raised Christian, Nick was still living however he wanted.

Nick came to see his parents to discuss a DUI he’d gotten while on their insurance. “I was still drinking and doing my thing,” he says, “but I instantly knew something was different with Kristen—something I’d never seen in another woman.”

Like Kristen, Nick had started using marijuana and alcohol in middle school, and through high school it had gotten worse. In his 20s, he started drinking so heavily he would black out on a regular basis. “That was 21 through 30 years of age,” he says, “and of course there were drugs involved in that, at least weekly. Sometimes I’d party till 2:00 in the morning and get up at 5:00 to go to work. I was what you call a functioning alcoholic.”

Wisely, Kristen didn’t want him to drink around her. “I had these huge boundaries like if he drank, he couldn’t be around me for 24 hours. And pretty early on, I was straight with him and told him all the things I’d done, including being in an escort service, and if he wanted to be with me, these were things that might come up.”

Nick loved how open she was. “I’d never met anybody like that.” They got married after seven months of dating. 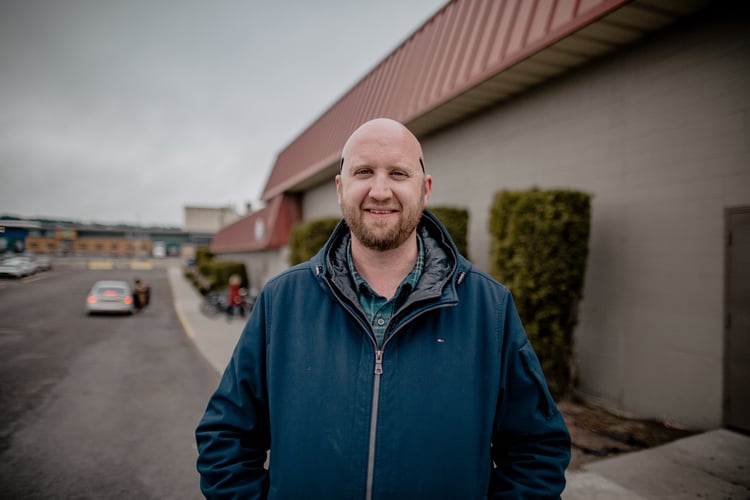 Today, they say it was too fast.

Soon after they got married, Nick and Kristen fell into drinking together. Nick became verbally abusive, Kristen received a cancer diagnosis. In 2017, they separated.

Kristen pushed everyone away. "My whole support system...I didn't want anybody to see me." But toward the end of her cancer treatments, she started to see a change in Nick, and eventually they moved back in together as friends. But the troubles were far from over. Kristen had fallen back into heavy drug use, and one afternoon—convinced she was beyond hope—she decided to jump from the Monroe Street bridge.

“Crazy thing was my old boss from the UGM Thrift Store was on her way to get coffee on her lunch break, and somehow she changed her mind and turned around. And here I come, walking down the street. She calls me over and takes me into her office. She calls the Crisis Shelter and they’re holding a room for me, and they drive me over there and put me upstairs.”

Once again, UGM became a safe haven, a family that welcomed her home. 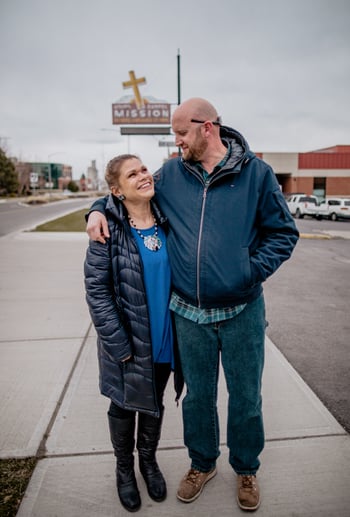 Kristen transferred to the Center for Women and Children in Coeur d’Alene. “I was praying the whole time. Nick had changed a lot; he was very forgiving and was there to support me.” Together, they decided to get involved with Family of Faith where they entered the ROAR recovery program and got housing for their family.

“I was still mad at God for a lot of the things that had happened in the marriage,” Nick says. “I’d never actually had a relationship with Him. I didn’t plan on having one with Him then either. But going through that program, I opened up about everything, and felt this huge weight lifted off my shoulders. I had never felt any kind of peace like that.”

Nick and Kristen slowly rebuilt their relationship stronger than it had been before. This time, it was built on a foundation of faith in God.

Kristen was healed of cancer. “And I was forgiven much,” she says. “Even though, after all the work I did in recovery, I still messed up, and I was still on the road to take my own life, He still turned around and pursued me. He still used His people to save me. And He gave my husband the heart that I knew was in there and made it shine through the mistakes I made.”

“He still turned around and pursued me. He still used His people to save me.”

Kristen was welcomed back at UGM, where she got a new job as a resource coordinator. And soon Nick followed. He was hired at the Men’s Shelter warehouse, where he works today as the manager.

Kristen insists that UGM has the environment she needs in a workplace. “The Lord knows I’m a sponge,” she says. “I’ve tried to work in secular places, and I soak in whatever is around me. Whatever the majority is—I can fall back into old behaviors so easily.”

For both of them, it’s also about the ministry opportunities. Nick says, “I love working at UGM because all the miracles and the amazing grace He gave us—I want to share that with other people. I know what a lot of these guys are going through, and now that I have a relationship with the Lord, I can’t imagine doing anything else. It’s just a blessing to be here.”

“I can go and minister to somebody, but I have to be filled up,” Kristen adds. “I have to be in a healthy community, and I need to spend the majority of my time in that.

“Now that we both work here, we’re continually growing because we’re in this environment. At UGM Motors [where the resource coordinators are stationed], we come together every morning and pray together and do some sort of word of the day or a Bible verse. And that’s the start of the day, and you don’t get that anywhere else.”

“UGM has helped me in every possible way.”

Kristen wrote a statement detailing her 13-year journey with the Mission: “UGM has helped me in every way possible since 2009—from shelter, to helping me transfer to the program that was a better fit for me in Portland, to then taking me and my baby girl back in to Anna Ogden Hall for six months to do an internship to learn a lot of different jobs by job shadowing, to then hiring me and allowing me to switch throughout the different jobs to find where I best fit, to then supporting me as friends when I got cancer and had to quit, to then taking me back into the Crisis Shelter that I had once worked at with open arms when I relapsed, to then inviting me to do Program again at the Center in Coeur d’Alene, but supporting me going into a recovery home with my family instead, and then hiring me back where I am today—over four years clean—as a resource coordinator. UGM has touched every single part of my life in one way or another since 2009, and I feel like that is important to know. It isn't a cookie cutter program. UGM touches people wherever they are at.”

“UGM has touched every single part of my life in one way or another since 2009, and I feel like that is important to know. It isn’t a cookie cutter program. UGM touches people wherever they are at.”

Every UGM staff member has a story, and every one of us has a part to play in creating the safe, healing environment into which we invite our guests. Everyone from our volunteers to our board of directors to Phil Altmeyer to the newest Thrift Store associate is a part of the UGM Family.

Be a part of the UGM Family

Join us on World Homeless Day to walk the streets, hand out warming bags, and welcome the stranger in.