No Job, No Home

Editor's Note: While this blog post was written in 2014, we're happy to report that Robert is still employed at UGM Thrift Store and doing well!

Not everyone who comes into the Union Gospel Mission has a drug addiction. For Robert Lindstrom, the recession and his employer's bankruptcy were enough to turn him out on the streets. When he turned to UGM for shelter and work several years ago, he found much more. 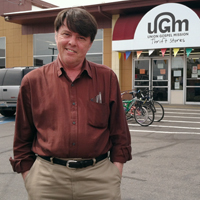 Robert says his life has been like a series of stones thrown in a pond: Throw a stone in a pond and the ripples expand, each one leading to the next. If you try and stop the ripples, you only make waves. To Robert it seems that the “stone in the pond” has been thrown more times than he can remember, so that mud and dirt could never settle and give him a clearer vision of things the way they are.

As a young man, Robert moved with his wife from his hometown of Spokane to Portland. After his marriage and his job ended in close succession, he fell back on his artistic talent to scratch a living on the streets of Portland until he managed to get a job at a sporting goods store.

Robert excelled at his position and advanced in the career ranks. His hard work paid off and he was asked to help set up a new store in Federal Way. In 1988 he made the move north, and for two decades Robert continued to assume more and more responsibility. He thought his future was secure, but his plans unraveled in a matter of days.

In early 2009, G.I. Joes filed for bankruptcy, and Robert’s supervisor told him quitting would likely be his best option so as not to lose his accrued benefits. But Robert didn’t realize turning in his resignation was the next stone to ripple his pond; the decision left him ineligible for unemployment benefits, even after 20 years with the company. At the same time, Robert was told without rent money he had two days to move out of his apartment. 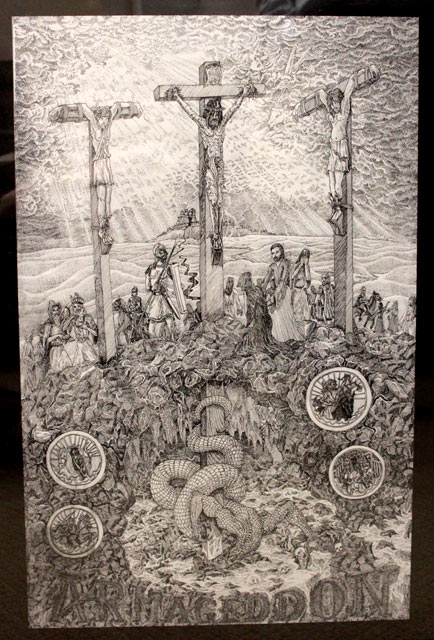 With nowhere else to go, Robert was back on the streets. He found a park to sleep in and again turned to his artistic gifts to earn a living. Robert sold portraits hoping to earn enough money to get back to Spokane and reconnect with his family.

One early morning Robert woke up to the baton of a police officer hitting him on the shoes. He was told to leave the park and given a ticket for criminal trespassing. He stuffed it in his pocket and ignored it. Soon he found shelter in exchange for doing odd jobs and continued to sell his artwork on the side. Wanting to be honest about his income, he visited the IRS office in Olympia, where he was given a refund that covered his journey home to Spokane.

Arriving in Spokane in the summer of 2009, Robert’s first goal was to find his family. Unfortunately, he discovered that his mother had died during his absence. Heartbroken, he visited his mother’s grave, expecting to see gravestones for the rest of his family. He assumed they had all died and gave up hope of ever seeing them again.

Again Robert turned to his artistic talent to make a living on Spokane’s streets. He soon found that wasn’t a viable long-term option. Having heard of the Union Gospel Mission, Robert decided it was his best choice, and he came here in July 2009.

Robert proved himself a hard worker. His assigned chores at UGM put him in the kitchen, and he soon was supervising there and then in the laundry room.

During his stay at the Mission a new program was introduced, now called the Employment Ready program. Robert became one of the first selected to sign up for the new program, which focuses on getting people back into the workforce. Within a few weeks, he began work at the Union Gospel Mission Thrift Store. 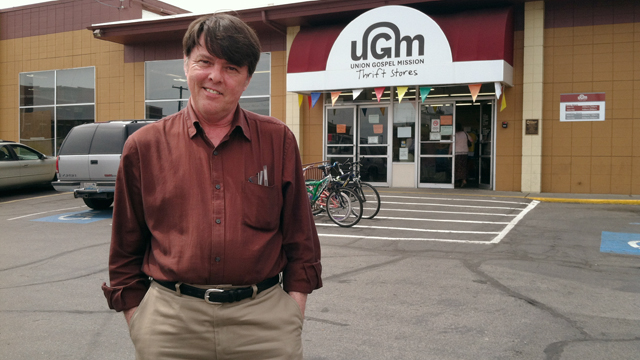 Robert says working there he realized he had found his new family. Soon the management at the store offered to hire him full time, in spite of a criminal trespassing citation that had hindered Robert’s other job applications. Robert felt like things had finally swung in his direction, in the right direction. Little did he know that the biggest surprise was only a few months away.

One day a man came through his checkout line at the store and told him his face looked familiar. He asked if Robert was part of the Lindstrom family. When Robert said yes, the man  told him he knew his brother Phillip and quickly left the store.

Two days later a familiar face came through his checkout line. “Remember me?”

Immediately Robert recognized his brother Phil. It had been almost 30 years since he had seen his brother. Days later his sister Connie drove up from Colfax and was also reunited with Robert.

“It makes me delighted looking back,” Robert says. “Before I had no family, nothing, I thought everyone was dead. But because I was with the Mission, if I hadn’t been here …Well, now I have two families, the Union Gospel Mission and my real family. I’m part of something again! How do you think that makes me feel?”

Robert thanks God for UGM and the Thrift Store. “I’ve learned more about Christ working at that store than I have at any church.” With joy in his eyes, Robert says coming to the Mission was the best thing that ever happened to him. Even with other job offers, there is nowhere else he’d rather be. Every day he cherishes being with both his earthly and eternal families.

Just as I Am

“God has taken me as I am, knows everything I’ve done and when he calls, I’m coming to him,” Robert says. “I’m one of the flock.” Although the ripples of life have not been easy, Robert says he is grateful for where each one has led him. Even if another stone is thrown in the pond, he knows God is in control and will give him the strength to face each day and stand firm in his faith.

This week Robert, Phil and Connie are moving into a home together to be a family once again. Robert’s also starting a website and copyrighting his artwork to start his own business on the side.

Without the Mission, Robert says he may never have found the hope and faith he had been looking for. He’s filled with gratitude and repeats the words of the hymn “Just As I Am”:

Just as I am without one plea but that Thy blood was shed for me...

The UGM Thrift Store provides employment opportunities for people coming out of our shelters and individuals with poor work histories or other roadblocks to employment. You can help by shopping or donating your unused clothing, furniture and household items.