“The place God calls you to is the place where your deep gladness and the world’s deep hunger meet.” – Frederick Buechner

Bob Peterson loves bikes. He rides them, fixes them, hunts for them at bargain prices, and gets excited about other people riding them, too. 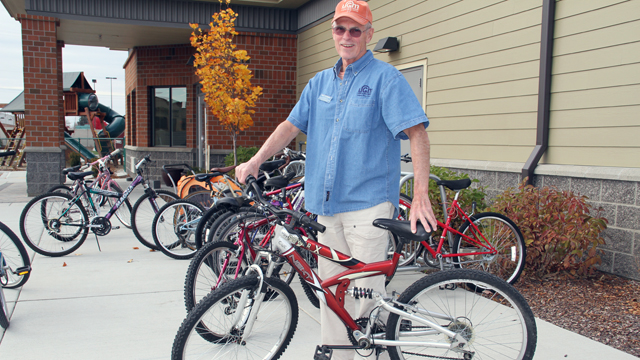 Bob’s love for bicycles has led him on adventures all over Europe and across the United States. He averages between 2,000-5,000 miles annually. He also sponsors kids in the CASA program on cross-state rides. 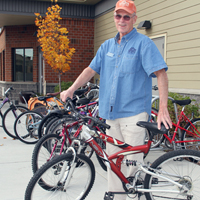 “When I get a little girl looking up at me saying, ‘You’re the one who took the training wheels off my bike and I can ride it now,’ it pays for all the time spent,” Bob says.

When Bob started volunteering as a photographer at the UGM Center for Women & Children, he quickly recognized the need for bicycles and bicycle repairs – for the kids, yes, but also as a means of reliable transportation for the women.

Safe, reliable transportation – something the average person takes for granted – is a very real need for many residents at the Union Gospel Mission. Bob saw that need and decided to do something about it.

Using donated bicycles, as well as bicycles he and his wife find at garage sales and thrift stores, Bob spruces them up and matches them to women and children at the Center.

“Here is my major challenge: finding a bike at the time it is needed that fits the person it goes to,” he says.

Bob said that challenge gives him the opportunity to watch God work.

For example, after spending the summer fixing up bikes and matching them to those in need, Bob had one bicycle that didn’t have a home. It sat in his garage for a few months before he decided to take it to UGM. Just as he parked his truck, a resident came over to him and asked if he had a bicycle she could buy. He told her he didn’t have any for sale but that she could have the one in his truck if it fit her. It was a tall bike that wouldn’t fit just anyone, but it fit her perfectly. She rode off saying she could now get to work.

Donating a bicycle to Bob can be a fulfilling experience, as one young boy from his church found out.

Bob received a bicycle from his church and found a recipient for it at UGM. He took a photo of the bike with its new owner and sent the photo along with a thank you note to the family that gave him the bike.

The boy who donated the bike received the note and it made a strong impression. His family has continued todonate additional bicycles to Bob, and they always receive a thank you note and photo of the bike with its happy new owner.

Where does your deep gladness meet the world’s great hunger? Explore the possibilities at the next UGM Volunteer Orientation.