Ric Rocca and his family own and operate multiple Jimmy John's franchises in the Spokane area. And somehow Ric still finds time to volunteer at UGM.

"I started out just volunteering in the kitchen at the Men’s Shelter. I loved working in the kitchen. It’s just so easy to get to know the men. You can cut vegetables side-by-side with them [some residents have kitchen prep as their daily chore] and it’s very easy to ask questions. 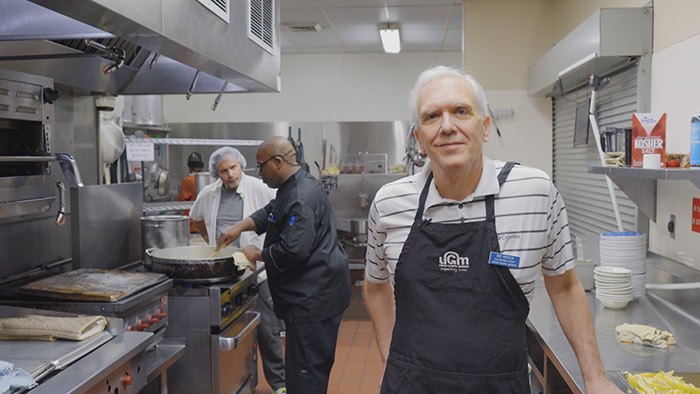 "Maybe it’s because I’m Italian, but being in the kitchen is the easiest way to connect, initially."

After getting to know the guys at the shelter, Ric started to consider participating in the mentor program.

This was three years ago. At that point, he'd been in the kitchen for three years and was ready to get to know a few men at a deeper level, to provide friendship and support during the later phases of  Program and beyond.

"At Jimmy John's," Ric says, "our motto is 'Boys and girls into men and women' and we approach business with our staff with a servant mentality." Because he's had many years of practice training his employees, he says he was primed to be able to provide a similar kind of support to the men at UGM.

Right now, he has three mentees: Phillip Reese, Nick Simons and James Escobar, all of whom have successfully completed UGM Men's Recovery. "The pandemic has just made it so we interact a little differently," he says. "I talk to two of them at least once a week, the third one we text occasionally (he’s doing well) and we’ll get together as soon as this thing ends." He says for the most part, when he connects with the guys, he just listens. Being available is his number one priority. But when they need advice or redirection, he's amazed at their ability to receive his input.

"I'm glad that they have enough trust in me that I can tell them anything."

Ric doesn't see himself as that different from the men he mentors.

"One or two bad mistakes, and I could easily be where they are. So that humbles you, makes you see homelessness in a different light. I have more compassion because I think in many ways to go into Program takes as much courage as I have, or easily more. They’re very introspective after going through Program. They seem to have an awareness of why they act the way they do. Much more than the average man. They have to stand up and bare their souls every day in self-evals. That is something that gives them confidence.

"I respect them. I admire them."

He also acknowledges that every story is different, as is every recovery journey.

"James’ issue was never drugs; it’s just been a lifestyle. He was my first mentee, and he left Program two weeks after we met, had a lot of ups and downs, then he came back and finished. We stayed in contact the whole time. I just encouraged him to finish. Said, 'What do you think God’s telling you?' And he did the right thing. He’s a really bright guy.

"With Phillip, he helps me as much as I help him. He’s very intuitive, good at listening. He really is a vision of how the Lord can change a person. Even from when he was first done with the program to where he is today, it’s just night and day. He’s worked through a ton of issues, and he’s very mature."

"It’s been a great experience. I’ve probably learned as much from them as they have from me."

Ric says the only thing that can change a person is the Lord.

"Everybody’s got issues, they may not be as severe, but once you’re in a habit, it’s going to be hard to change. The only thing that can change you is the Lord. Nothing else really sticks, which is why the UGM program is so much more effective that others."

Ric doesn't believe that many organizations could run a mentor program the way UGM does. "You have to have faith," he says. "UGM leadership has to have faith. I mean they’re not controlling us. It just shows how solid the program is. They just support us."

As far as themes that arise when mentoring men in ongoing recovery, Ric says there are several.

"I encourage my guys that some of their struggles are selfish. It becomes all self-protection, and sometimes, to keep the newness and have a more positive outlook, they need to start doing what I do: start mentoring, start helping other people. We all get self-absorbed. It helps to focus on something else, to get out of yourself from time to time. These guys have such wonderful experiences, they can go back to the Mission and impact men who are still in the thick of it, because they’ve been through it."

Ric also encourages every mentee to stay connected to a church community. "And they struggle with that," he says. "They can be very protective still, of their emotions, their stories."

Learning how to live out the new life they've received through trauma care and addiction recovery, is not as easy as it sounds. Ongoing mentorships have proven to be one of the greatest gifts our volunteers can offer in the years after Program. Ric is grateful to be able to walk alongside men at this stage.

"It’s such a huge part in terms of getting to that five-year mark."

He says if you're considering becoming a mentor, try to go in without expectations.

"Don’t expect for it to go perfectly, or for you to be perfect. A lot of it’s out of your control. You just do the best you can. You’ll have ups and downs. There’s no playbook. It’s just a relationship.

"And you’ll probably get a lot more out of it than you’ll give."

If you're inspired to join our fleet of invaluable volunteers, please sign up to attend a Volunteer Orientation!