Editor's Note: Jill lost her battle with alcoholism on August 28, 2018.

Sweet. That's the first word that came to mind when I met Jill Connors. She has a gentle voice, a kind, round face, twinkly eyes. When she sat down next to me in the waiting room, I didn't realize she was my interview. I was supposed to talk to someone who had been relapsing repeatedly for 15 years, and for whatever reason, Jill did not fit the image in my head.

Jill almost drank herself to death before coming to UGM Women's Recovery at Anna Ogden Hall. Having been through five treatment centers, she's very familiar with the pattern of relapse, but today, she's been sober eight months. In this two-part interview, we talked about what's tripped her up in the past and the tools she's learning to make this leg of her recovery more successful. 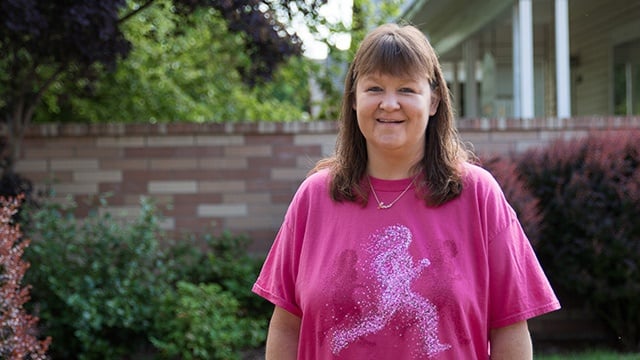 UGM: What brought you to Anna Ogden Hall?

Jill: Total alcoholism. My life had become so uncontrollable. I was living with my dad, and I was getting to the point where every time I would try to quit, the withdrawals were so bad, I’d have seizures and end up in the ER. The last time I ended up in the ER, my dad was like, we gotta find somewhere...

I’ve been through five treatment centers – inpatient ones – so he was like, we have to find something different. A friend of mine looked into some stuff for me, and then my dad, my brother and my sister-in-law, we all met with my friend, and she said, this is where you need to go.

So I went down to the Crisis Shelter that night, and I was there for a month and got into here.

UGM: How long has alcoholism been a problem for you?

Jill: I started drinking in junior high, but it was a lot of social-social until about 2001. I lost my mom and my brother to cancer in the same year, and I just went overboard, and then it turned into the loss of a job. My husband lost his job. Our house foreclosed. Just everything spiraled down from there. The last 5 years…I couldn’t keep a job. Several temps didn’t work, and so finally, I was just drinking myself to death. The ER knew me by name, and they said, “One of these nights you’re not going to make it out of here. Your liver’s not filtering the alcohol any more, and you’re just soaking in it. You’re just killing yourself.”

It’s not genetic in my family. Neither my mom nor my dad were alcoholics. It was hard for me to figure out…doubting myself and being really hard on myself. Why you? There’s 5 of us kids. I’m the only alcoholic. It was a lot of just why why why?

Through those other five treatments, I learned a lot of book stuff, but I didn’t know Jesus. I hadn’t accepted Jesus Christ, and so, honestly, I think my coming here and doing that, I can understand so much more, and it just makes so much more sense now. 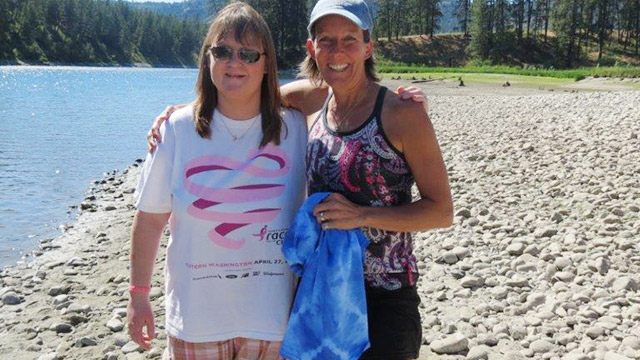 UGM: Was that new for you?

Jill: I believed in him my whole life. We prayed as kids. I went to Sunday school as a little kid. After my great grandma died, we stopped going at about 5, so I haven’t stepped into church since then until I got here…about 35 years. But I prayed every night. I thought that’s what it was. I believed. I knew he was there. I just didn’t know anything else.

UGM: So, how is it different now?

Jill: Oh, just to know that I don’t have to worry about what I did in the past. You know, I thought, why should I even open the Bible? I’ve done so many horrible things, let him down so many times. Why would Jesus even consider me to be worthy of anything? By coming here and realizing I’m already forgiven once I accepted him, and everything’s just washed away, and so…To me, it just cleared up everything else, so I could learn instead of continuing to wallow in the past and everything that I had done wrong. I could just let that go and focus on moving forward.

UGM: How has relapse been a part of this journey for you?

Jill: Relapse has always been my huge problem. I guess I really never get to stay clean for that long to even call it relapse, but I did relapse since I’ve been here. I went home for my first overnight, went back to my dad’s house and ended up meeting up with my husband, and it all went…you know, we just started drinking.

I immediately called here and confessed. I didn’t know what to do, and I just could not stop.

Relapse...it hits me so hard. I mean, it was almost like I didn’t know I had taken the first drink, and then it was like, ohmigosh, what did I do? So it can sneak up on you so easily and then it’s like it’s too late. And then my pattern has always been, Well, you took the first drink, you may as well keep going, and then the binges start and it’s horrible.

When I relapse, it happens so fast, not just the beginning happened fast, but the sickness came on so fast, and I was literally drinking to not have a seizure. I know it doesn’t make sense to anybody, so I missed my first accountability meeting, so I ended up going into the Crisis Shelter.

I was so bad when I got to the shelter, they ended up calling an ambulance. I went to the ER, and they gave me stuff to calm me down, and I was on that for two or three days there.

Detoxing is horrible for me. Alcohol is one of the few things you can die detoxing from.. I have seizures from detoxing, so instead, I just keep drinking.

So, relapse is…I don’t know if I want to say it’s a part of every recovery because I don’t know if it is, but it is part of mine. I’ve had several people – my counselor for one and several others – tell me how much stronger I am since then. I wouldn’t wish that on anybody or suggest it, but I’m glad I relapsed at the beginning of this program, and it has made me a lot stronger.

In part 2 of Jill's interview, she describes the tools she's learning to prevent future relapse.

Do you know someone who is struggling with alcoholism? The attached video may help you to identify early signs.

Mentoring Through Recovery and Relapse
It Won’t Be Different This Time
I am no one's Savior.
Is Addiction a Sin or a Disease?
The Fatal Attraction of Addiction