Last year, I experienced a significant dream, a visitation from the Lord. In my dream, I walked out onto our patio, and Jesus was seated in one of our chairs handling an old towel. The piece of cloth was dirty with oil and mud stains. It smelled and was threadbare and tattered, but Jesus handled it as if it were precious and new. His mood was pensive. Then he looked up at me with tender eyes. 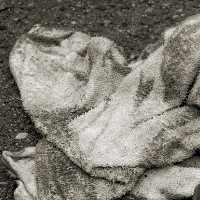 I was embarrassed at the state of the towel, a rag which could be used for little more than wiping off a motor or the dog’s excrement from my shoes. "I only paid a buck for it," I said.

Jesus replied, "I gave my life for it."

I stepped out to the patio
And he was there
Amicable eyes
‘Neath shabby hair
He handled the rag
With reverent favor
Considered its plight
Its life did He savor
That tattered cloth
Raised guilt to my face
I started to stammer
To argue my case
“Paid only a buck
For that worthless wipe”
I’ll toss it at once
To temper His gripe
I pled my cause
To His empathic face
Desired a smile
A measure of grace
His words struck deep
They entered my bones
Broke down my defenses
I stood there alone
“I don’t care that it’s worn
Stained, covered with mud
Frayed, ripped, or stiff…
I gave it my blood”
Then truth was exposed
Opened my mind
The rag, it was me
That rag was mankind