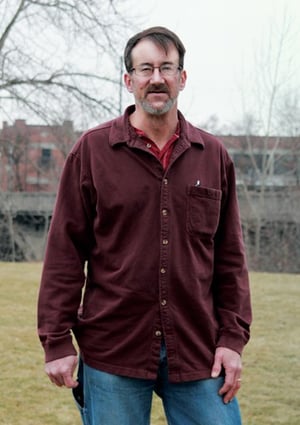 And as Sharon Hersh, author of The Last Addiction writes, denial is the nearly inseparable companion of addiction.

“Part of the insidious nature of addiction is that it hides itself from the very person who needs healing. And every addiction—whether a substance, activity, person, or ideology we love too much—involves self-deception that leads us to also hide from others.”

Steve McAnulty had been angry, depressed and drunk for the better part of 15 years before coming to the Union Gospel Mission.

Angry: Both Steve and his wife were unemployed, and the mobile home park where they lived was being shut down. They had no idea where they were going to go. Steve had been through a variety of jobs – mostly in retail management and construction – and, at 52, had no career prospects. Why wasn’t anything working out? Why had life dealt him such a crummy hand?

Depressed: Steve had known he was depressed for years but was extremely opposed to seeking help. His mother, who suffered from bi-polar disorder, had been in an out of the hospital during his childhood. She was married three times, and at least one of her husbands was physically abusive. Steve and his siblings were permanently placed in foster care when he was 16.

The last thing Steve wanted to do was dredge up all those memories, and judging by his mom’s experience, he couldn’t see how therapy or counseling could help. “I didn’t want to deal with mental health. I just wasn’t going to go there.”

Drunk: “Just before I came here, I was drinking a liter of whiskey a day. I pretty much stayed drunk…I was fed up. I’d given up hope.”

Steve admits he might have drunk himself to death – he’d already been in and out of the hospital twice with a bleeding ulcer – if his wife, two children and small group hadn’t staged an intervention. “They said, ‘We love you. We can’t see you keep doing this. You know, you’re going to end up in the grave.’ And my wife…we’ve been married 25 years, she kept hanging on…hoping for the man she married to come back.”

Steve agreed to get help, did some research online, and found UGM’s LIFE Recovery program. He checked into the Mission in July 2012 and was accepted into the program in less than a month.

When confronted with the damage he was doing not only to himself but those around him, Steve took that all important first step.

“The turning point,” Hersh writes, “occurs when we come face-to-face with reality and make the choice to surrender—even if it’s only a start. It’s then that we begin to see our compulsive and obsessive behavior for what it is and better understand the truth about our habits, our misery, and the addiction’s impact on our relationships.”

It’s important to understand, however, that choosing truth over denial is not a one-time thing. Even though Steve was sober from the day he walked in the Mission, he struggled to buy into his recovery for months.

UGM Counselor Dave Edwards explains, “We all want to push unwanted thoughts, feelings and memories out of our awareness – at least temporarily. Denial is a defense mechanism that we use to avoid pain.”

Recovery, however, requires honesty – even when it hurts like crazy.

Steve had to face a number of painful truths:

When you look at these points one-by-one and consider how much is packed into each one, you can see why recovery isn’t just about sobriety and why it takes months to make a decent start on the process.

Eighteen months after Steve made that initial choice to change, he has finished the in-house portion of UGM’s LIFE Recovery. He has a job he enjoys at Sweetwater Bakery. He and his wife, Iverna, are in marriage counseling and looking for an apartment. He is committed to his sobriety, dealing with his depression and taking responsibility for his choices.

When Steve first came to the Mission, he requested to work in the kitchen. “I worked Monday through Friday, doing breakfast. So I was up at 3:30 or 4:00 in the morning. 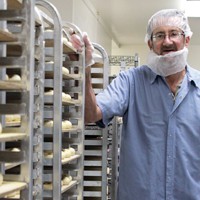 “I have always enjoyed baking,” he said, so when it came time for his business practicum, he knew what he wanted and went after it. “I happened to go to the VA for something, and I had a pastry that said ‘Sweetwater Bakery’ on it. I flipped it over and saw ‘Post Falls.’ I got on the internet, looked it up, saw what it was, got the contact information, got it to Tiffany (Director of Vocational Advancement) and had my interview for my practicum before we even did our mock interviews.”

After he completed his practicum, Sweetwater hired Steve. He makes cinnamon rolls, raspberry oat bars and turtle brownies, as well as well as wrapping, labeling and preparing orders.

At 52, Steve has launched into a whole new career – one he’s excited about.

Click here to see all articles for the January 2014 issue.