10 Lessons I keep learning at the Union Gospel Mission: Part 1

Editor's Note: Washington State University professor David Wang is a volunteer in the day room at UGM. His is a ministry of relationship or, as David calls it, "presence." Here he shares what he has learned and continues to learn from spending time with men at the UGM shelter.

What I learned while working with the homeless

1. There is a large community of the poor with huge needs right in our midst.

It is good to be with these folks.  The Scriptures say much about direct ministry to the poor.  Isaiah 58:6-7: “Is this not the fast that I have chosen? To bring bread to the hungry, and to bring the outcast into my house?”  It means a lot to be accepted by some from this community; to be on a first-name basis with some of them. 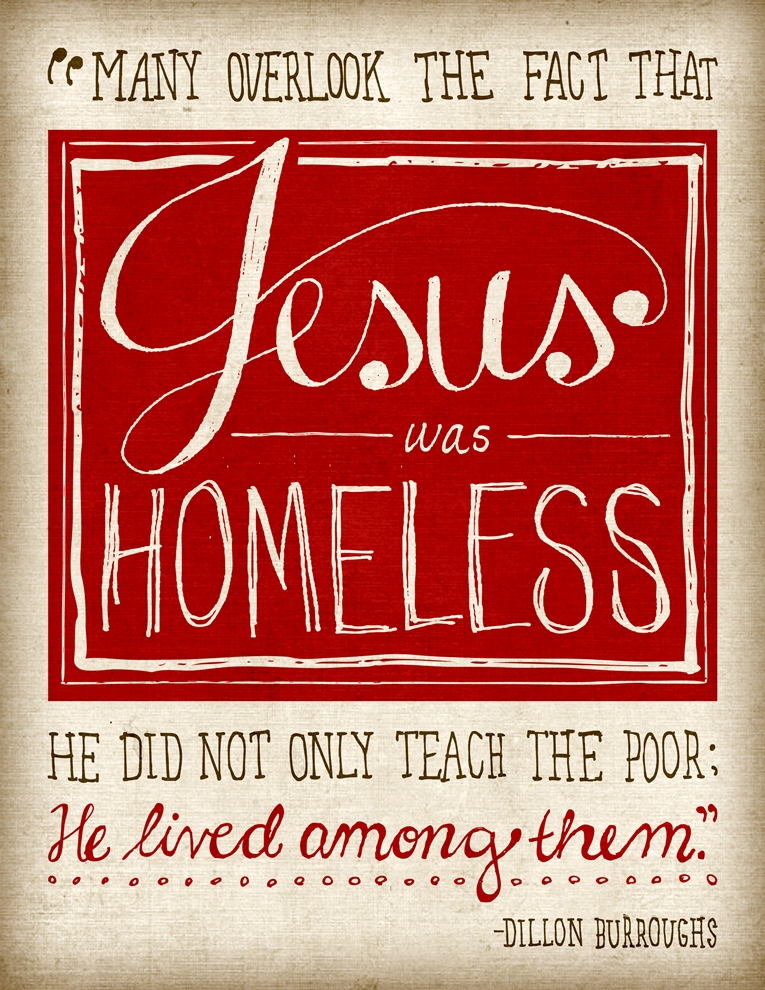 One of these men once said to me, “Jesus was a homeless man.”  I will never forget that.  I think Jesus feels at home in this community, and I often feel closer to Jesus at the Mission than I do in my study.

So if nothing else, the UGM has helped me to check my “conceptual Christianity” at the door, and tend directly to the needs of homeless men.  It shows me how much I’ve made “sharing the Gospel” itself a conceptual matter: the theology of it; how to do it; when to do it; methods for doing it.  At the UGM, I basically just do it.

I can’t tell you how good this has been for me.  I often say that I’m not sure I actually help at the UGM, but the UGM has helped my Christian heart stay healthy.  And it always amazes me that such a large community of folks is immediately receptive to the Gospel message, and it’s a community that’s with us all the time.  This leads to the next lesson:

At the UGM, receptivity to the Gospel is high because, as you can imagine, the level of uncertainty is so high.  The men at the UGM come in all varieties, but one thing is sure: each man is totally uncertain as to where his life will go next. 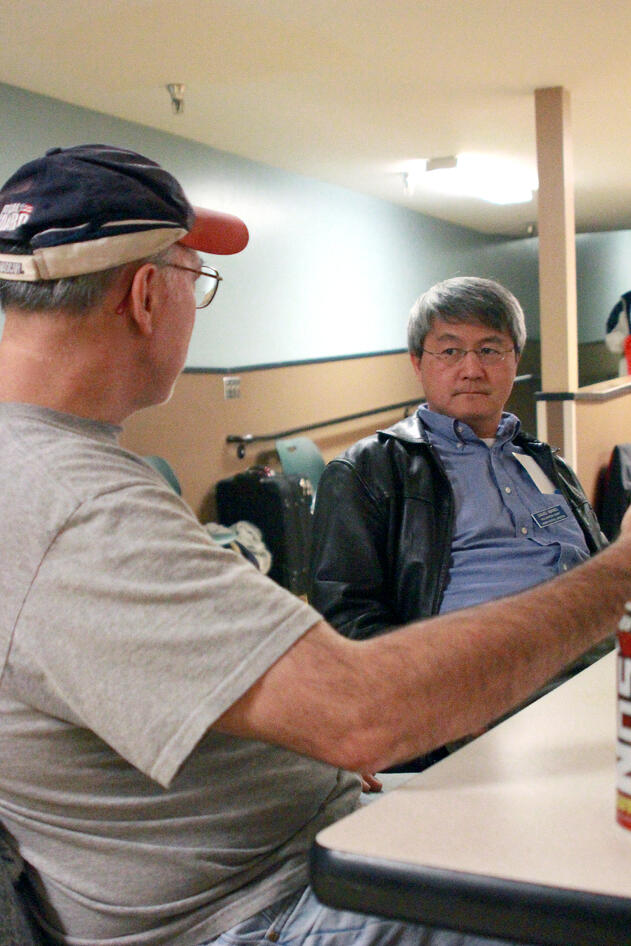 Each man deals with uncertainty in different ways.  Some remain proud and arrogant.  Others are broken.  But in all cases, recognition of need for the Gospel is just around the corner.

Let me give an example of a proud and arrogant case. On a cold winter day at the Mission, I saw this young man – Alex – sitting huddled in the Day Room.  When I asked how he was, a string of expletives came out of him.  But I just continued to be kind.

Then one of the volunteers in the clothing room (himself a graduate of the Mission’s program) said, “Why don’t we just get you some warmer clothing?”  So we took Alex to where the donated clothes were stored.  In five minutes, Alex had wool socks, heavier jeans and shirt, gloves, and a coat from Land’s End that made me think, “Gosh, that’s better than any coat I have.” 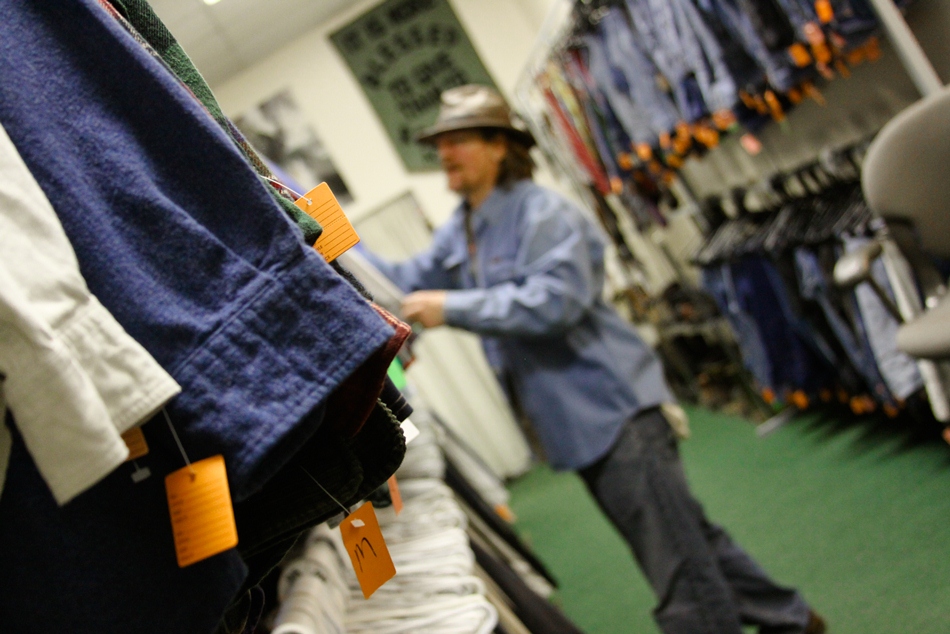 Alex needed to go to the train station because his mother in Missoula had wired a ticket for him.  So as I was driving him to the station, he quietly asked me, “Just how do I find this Jesus?”  We pulled over at the train station and prayed together.  This leads to the next lesson:

3. We are links in the chain of salvation; we are rarely the “seal the deal” person.

At least this is true for me. Evangelism is often presented as a “seal the deal” thing.  Or worse: it becomes a “make the sale” sort of thing.  And then we don’t feel great because we rarely seem to make the sale.

The summer after my freshman year in college, I signed up to sell pots and pans door to door.  It was an absolute disaster, and it hasn’t been helpful that I often recall that experience when I hear talks given on evangelism.

At the UGM, I’ve come to deeply appreciate that nothing about evangelism is about me.  I simply have to "presence myself" in the lives of men who, because of uncertainty, are open to the Gospel.  And I become part of a much larger story – a story of love – in each of these men’s lives that God is writing.  I am not the story; I am not even a chapter in the story; I am a word lost somewhere in that story, but I experience pleasure seeing God write these stories. 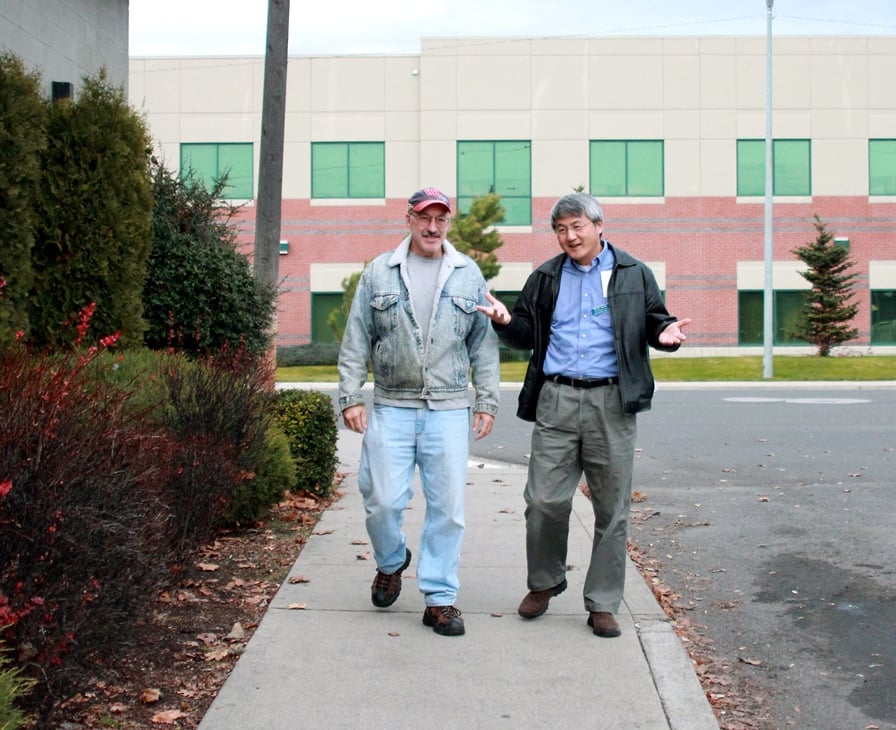 Presencing myself in the lives of men at the UGM has also given me more heart to presence myself in the lives of students and colleagues, who are much tougher audiences for the Gospel.  In recent years, I’ve been gratified to see repeatedly in student reviews this theme: “Professor Wang shows so much care for us.”  This is not something said of me before.  I have the UGM to thank for this, where I cultivate this way of relating to people.  This is how “evangelism” has become real for me: by making sure I’m part of a chain of love, the length of which I could not see.

4. There is a range of what “being a Christian” means.

I often ask guests at the Mission: “Do you know Jesus?”  And I get a range of answers.  Frankly I have no idea what many of these answers mean.  UGM is a Christian mission, so some toe the party line.

One such case is Terry Lee.  Who is Jesus to you, Terry?  He just says he wants “the works” when it comes to what God has for him.  And then we pray, and he and I are both blessed.  Is Terry a believer?  Did I “lead him to Christ?” I don’t know, and frankly I’m not too concerned.  But the sense of blessing going both ways is palpable.

And then in some cases, Christian conviction comes with a mental disorder.  Consider Hugh, who was a Christian by any measure.  But Hugh was also convinced that someone had planted a device in him to track him 24/7.  No amount of talking can dissuade him.  And the girlfriend in Seattle he kept harping about: I don’t know if she even exists.  But Hugh is a fellow believer.  And one day he just left.

When asked if they know Jesus, many men answer something to the effect that God helps those who help themselves.  Well, certainly I’ll not agree that we can help ourselves into heaven.  But I’ve learned to park my “Reformed” theology at the door.  I simply relate to these guys as Christians.  Of course, I push the needle towards certainty of salvation for each.  But I’ve learned that the inclusiveness of the love of God is a much larger tent than I have ever assumed. 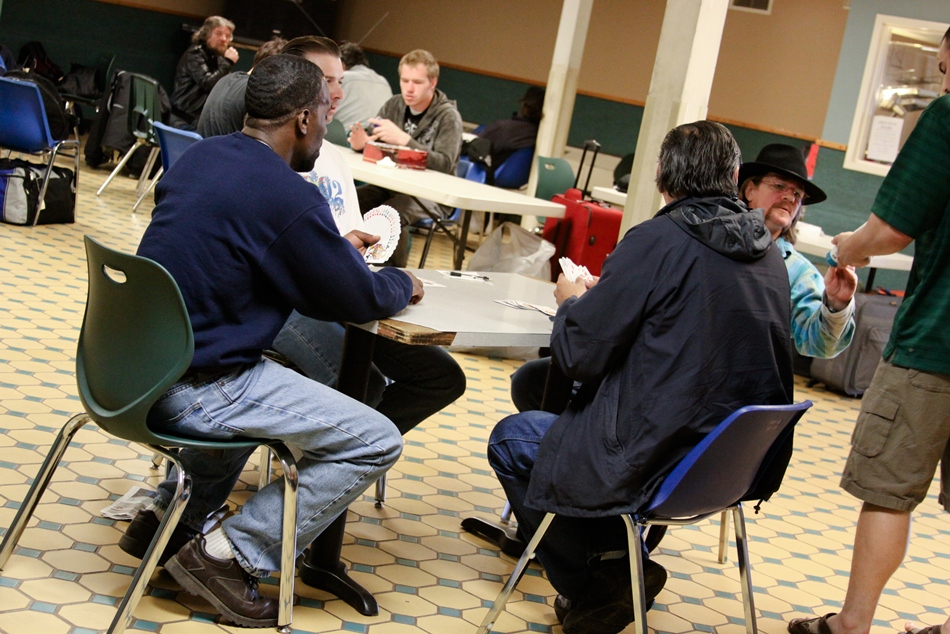 One other example: Once I noticed this guy decked out in Hell’s Angels garb: the biker vest, the pierced body parts, the hair greased into pointy ends. Finally I got up enough nerve to approach him and he smiles and tells me about how the cousin he prayed for had been healed. The man was a brother in Christ! He tells me about his gift of healing. I’ve learned not to caricature people whether they are Christian or not.  This leads to the last lesson for today:

5. It is possible to see and talk to Jesus.

At the Mission, I often meet men who say God had spoken to them.  And one of the dearest men at the Mission, Mike, tells me of repeated times when he actually saw Jesus.  When someone says they saw Jesus, I simply say, “Please tell me what he looked like and what he said.”  At least in Mike’s case, I am always blessed.

Mike has been promoted to work in the dry stores room at the UGM, so he has a lot of responsibility.  And he applies Christian principles directly and simple-heartedly.  For example, since Mike works in dry stores, he decides what the Mission gives out to other food outreaches in our area.  He says, “Give and you shall receive.  We’ve given more than ever, and we hardly have enough space to store what we have coming in.”  This is a person who has seen and talked with Jesus.

So I say this: when I go to my books, or think back on seminary days, or (permit me to say this without meaning to be pejorative) most of the time when I go to church, I hear about Jesus.  When I go to the Mission, I rub shoulders with men who have seen Jesus.  I don’t want to miss the next time this happens.

Check back with The Impact Blog in a few days for the rest of Professor Wang’s lessons learned while spending time with the homeless.

Intrigued? Wondering how you might get more involved? We'd love to send you our free e-book: Every Last Conceivable and Downright Inspiring Way We Could Think of to Help the Homeless with Union Gospel Mission. Just click on the link below to request a copy.