From Gang Banger to Responsible Father

Zachariah’s story is written in ink all over his body. His mom died when he was 12. The tear drop under his eye is for her. He never knew his dad. At 13, the gang became Zachariah’s family. The 1 and the 8 scrawled on top of his head mark him as a member of the 18th Street gang, a distinction he cannot easily escape. He’s been to prison three times for drugs, guns and stealing cars. “Sinful nature” is inscribed in fancy script on the left side of his head, and on his forearm, a little blue devil stands on a bed of skulls. 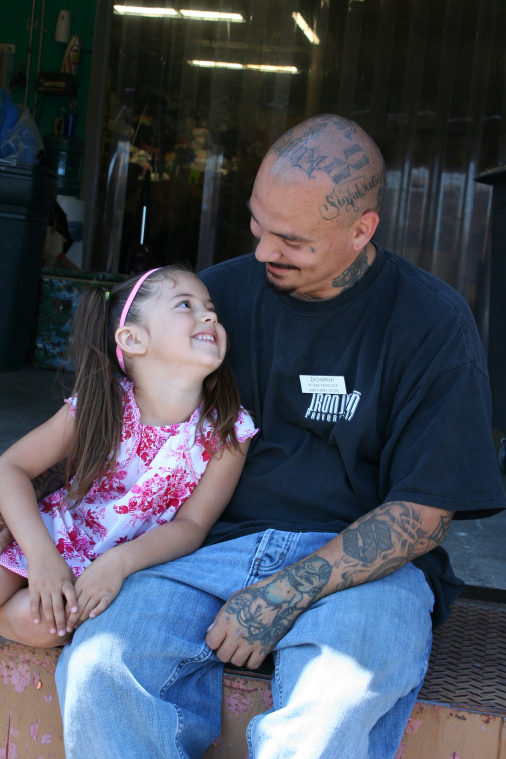 The tattoos tell a story – a story of violence, of a desire to belong, to be recognized and to be feared. But the man – his demeanor, his words, his behavior – tells a different story. “My personality and the way I look conflict big time,” Zachariah said.

Zachariah lost his way at an early age and wandered far from God, but true to the meaning of Zachariah’s name, God remembered Zachariah. The Creator of the universe had his eye on him.

Zachariah met Jesus by reading the Bible. In the back of the Bible given to him was an explanation of how to become a Christian, and he prayed to accept Christ’s sacrifice for his sins.

Zachariah tried hard to get his life back on track, to leave the gang behind, both because of his newfound faith and because he and his wife had a little girl, Elexis. He went to school to become a welder but couldn’t find a job when he finished. He and his wife separated. Desperation led to despair, and he relapsed into his old lifestyle.

“I just got real depressed. I gave up. I thought everything was lost, and I fell into my old ways.”

Zachariah gave up hope. He started using, stole a car and ended up in prison for the third time.

When he was released in December, Zachariah once again determined to live life a new way, but this time, God brought him to the Union Gospel Mission.

“All my prayers were like, ‘Lord, please help me find a job. Let people see me for myself and not for what I look like.’” Zachariah needed the hope that his future would not be determined by his past.

He started volunteering at the UGM Thrift Store and was eventually hired full time. “I love it here,” he said. “I love to serve. The group of people here is awesome. Never in my life have I had the support like I do now.”

Zachariah explained the difference between the “family” he found in the gang and the family he has now: “You have that sense of belonging (in a gang), but there’s conditions to it. I felt like, yeah, these are my friends. This is my family. We’ll die for each other, but in reality, it isn’t true. It’s a conditional type of love.”

Through his church, the Union Gospel Mission and his job at the UGM Thrift Store, Zachariah found acceptance without condition. He found a community of people who looked beyond his outward appearance to his heart. He found a job and the means to provide for his daughter. He found hope.

The Bible refers to hope as “the anchor of the soul.” (Hebrews 6:19). An anchor keeps a vessel from drifting with the wind or current. Without an anchor, the vessel is carried off course. Without hope, the soul wanders and eventually despairs.

Today, Zachariah is working full-time at a job that he loves, has moved out of the Mission into the Barnabas apartments – a transitional living community with ongoing support – and spends as much time as he can with his beautiful daughter, Elexis.