“I was a negative, angry, violent, depressed individual.”

Dean Lynch, 45, came to the UGM Men’s Shelter on December 27, 2011 after losing his job, his truck, his apartment, his girlfriend…and his mind.

“I was having what I call violent episodes…I would snap, and I really wouldn’t know what I was doing at the time. Eventually, I would come out of it, like a tunnel vision where I would look around and see the devastation I had caused…I was scared I was going to kill somebody.”

Dean remembers several casual interactions with strangers that triggered a violent response on his part: an encounter on the bus, coming out of Safeway and just walking down the road when a bicyclist passed too closely.

After threatening an employee at Washington State Labor & Industry, Dean was assigned a lawyer who eventually convinced him to check into Sacred Heart Medical Center.

Dean was in the psychiatric unit for a week where he was prescribed eight different medications to manage his anxiety, depression, suicidal ideation, and violent outbursts.

While Dean hasn’t had a violent episode since his hospital stay, he wasn’t really himself for the first year either. In fact, the UGM Men’s Recovery team rejected his first two applications to join the program because they thought he was too heavily medicated to do the hard work of recovery. People around Dean likened him to a zombie.

After being turned down for the program, Dean didn’t give up.

“I knew who I was. I had a good idea of who I wanted to be. And for me to do that, I needed to change pretty much everything.” He was convinced the Mission’s long-term recovery program was the best way to make that happen; so he went back to his doctor, and together they started reducing his dependence on medication.

“From large dosages of eight different medications, I’m down to three and still continuing one at a time to reduce the dosages.”

The third time he applied for the LIFE Recovery program, he was accepted. And so began the hardest work of Dean’s life.

Here’s what UGM’s LIFE Recovery teams want you to know: While Dean was homeless and jobless before coming to the Mission, those circumstances were actually symptoms of a much deeper problem. Dean had a good work ethic. He had been a member of the Coast Guard for four years and worked steadily both before and after, paying bills, managing daily responsibilities. But underneath that functional exterior was a core of unaddressed pain that refused to be ignored any longer. The medications masked the pain, but true healing required something more.

The last thing Dean ever wanted to be was vulnerable.

After his mom’s death when he was seven, he grew up with his dad and three brothers.

“It was a very macho atmosphere…I can remember the day my mom passed away, and it was never really a topic that was acceptable to talk about. The dynamic of the house was that, if you showed your emotions, you were pounced on, picked on, made the example. So I learned very early to stifle my emotions.”

He also learned to fight. “As far back as I can remember – fighting – I’ve always been good at it. We used to box as a means of discipline.” When he and his brothers fought, his dad had them put on boxing gloves and “go outside and finish it.”

Looking back, Dean believes he’s had a level of depression his entire life but no idea how to deal with those feelings of sadness and loss; so he repressed them. At the same time, he cut himself off from relationships. His mindset was: “I don’t need anybody. I can do this myself. All you’ve got to do is make it through the day and dig in again the next day and you’ve made it through.”

Until suddenly you can’t.

Change from the inside out

The stirrings of change began in Dean as he sat in evening chapel services. “I really didn’t want to be there. I don’t know if it was the sermon or the hymns, but I would fall into thoughts of my past and what I’d done. And I would literally feel like I was being persecuted… to the point where I would break down and cry the majority of the time.”

Eventually, Dean recognized the Spirit at work. “I gave myself over to the Lord February 24, 2012, and ever since then, it’s been an adventure. I’ve just been hungry for everything.”

When he was accepted into the program, Dean decided, “I was gonna be as teachable as I could, be open to endless possibilities. When the going gets tough, I’m not gonna back off. I am gonna give it my all.”

And Dean was true to his word. He finished the program in August and was hired by Jet Seal, the manufacturing company where he completed his business practicum. He attends church and small group and has two godly mentors. Most importantly, real change has been wrought in Dean’s life. 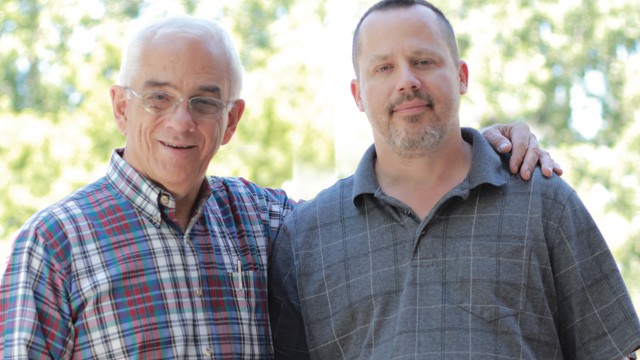 Just a few of the paradigm shifts to which Dean points as evidence of that change:

• Positive vs. Negative: “Before I was negative and selfish and dark. I look at things differently now. I look for the positive.”
• Relationship vs. Isolation: “The first two weeks I was here I didn’t say a word to anybody unless I had to. Now, I realize I’m built for relationships. I have a relationship with the Lord. I’m open and making the effort to connect and engage with others. That wasn’t part of the game before.”
• Impenetrable vs. Vulnerable: “I had basically shut down and stifled and never addressed the trauma in my life. Now, I realize I need to put myself out there and make myself vulnerable.”

Dean admits he still feels tempted toward violence on occasion, but he hasn’t acted on it, and that kind of impulse control is a huge change in and of itself.

“I’m looking to establish relationships and just live life positively and differently. Different is a big word for me.”

Learn more about trauma and its role in addiction here.

Click here to see all articles for the September 2014 issue.