The Crisis Shelter: a safe place for homeless women and children 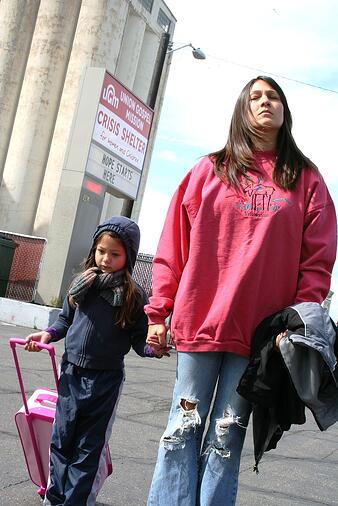 Seven years ago this week, UGM opened the Crisis Shelter for Women & Children at 1234 E Sprague. This week also marked the Shelter’s 10,000th check-in. (That doesn’t include the number of women using the overflow space – beds on the floor from 10 p.m. to 6 a.m.)

“Water to the thirsty. Food to the hungry. Shelter for the homeless. The basics.” That’s the idea of the Crisis Shelter, said Director Rich Schaus.

In 2011, recognizing the growing number of homeless women and children, the Crisis Shelter underwent a major shift in philosophy. They determined not to turn anyone away due to lack of space, and the number of guests served nearly doubled in one year. This philosophy shift also meant more women in each room, including moms with children. Today, two or three moms with two or three kids might be housed together in one motel-size room.

In 2013, the Shelter served an average of 395 women and children per month. Some nights, particularly during the summer, the shelter is absolutley bursting at the seams with over 100 guests in house. The Crisis Shelter had 4,726 check-ins in 2013, a 20% increase over 2012.

“Most of these women are all too familiar with conditional love," said Director Schaus. "We’re trying to give them a taste of Christ’s love, which means loving them just as they are, in the middle of their personal chaos and helping to keep them safe.”

Who are the women coming to the Crisis Shelter?

Our guests have generally been in survival mode for a long time – worrying about where they and their children are going to sleep and what they’re going to eat. They’ve been doubling up with friends and family – sometimes for months.

By and large, they come from dysfunctional backgrounds and have not fully grasped how to care for themselves, let alone their children. Many have participated in high-risk lifestyle choices – drug and alcohol abuse, smoking, prostitution or multiple sex partners – and most have either ignored or not been taught healthy, preventative lifestyle principles.

Located at the edge of what is commonly considered “prostitution row,” next door to the Hells Angels’ headquarters and across the street from a bikini barista drive-through coffee shop, the Crisis Shelter is clearly in the world but not of it. Many times, the environment seems chaotic, and yet again and again, guests insist the motto on the marquee is true: “Hope starts here.”

Unless a person has been physically involved in serving the homeless, it is easy to have a romanticized view of what the work is like. The Gospel Coalition published this quote from Amy Sherman of the Heritage Foundation: "It's just too easy to love 'The Poor.' It's a lot harder to actually do the hard work of building face-to-face relationships with real people with real needs, with real, messy issues."

The following incidents, which all happened within a single week at the Crisis Shelter, are excerpted from staff notes. They are included here to give an idea of what Shelter staff and volunteers encounter as they "build face-to-face relationships with real people with real needs, real messy issues":

Sunday: One of our guests reported being at the Men's Shelter for lunch when a man approached her in a green jeep and asked if she wanted a ride. She declined. He followed her all the way back to the Crisis Shelter as she was walking. She reported it to Crime Check who dispatched a police officer.

Monday: A former guest who had been asked to leave due to threatening behavior in the past stopped by this morning.  She wet herself in the dining room.  Staff allowed her to take a shower and put on clean clothes.  She wanted to hang out and when asked to leave, she became very angry and began yelling.  When the director went in to chat with her, he was able to convince her to leave. When she got outside the gate, another guest was walking toward her and smiled.  The former guest punched her in the face.  We helped the guest who was assaulted file a police report. We discovered later that the former guest was arrested for assaulting an employee at another facility.

Tuesday: Many guests came in having been diagnosed with the flu.  We worked to isolate and serve these ladies while they recover.

Wednesday: One of the singles' rooms (six single women to a room) blew up with lots of shouting and f-bombs. When staff entered the room, one of the guests directed her anger and profanity at the staff member. She was asked to have an accountability meeting with staff and eventually calmed down somewhat. 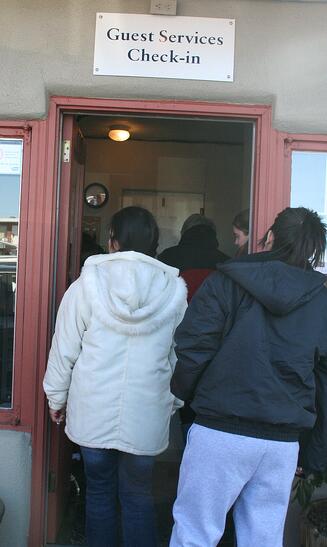 Thursday: One guest expressed concern about another guest using the "N" word. She asked staff if she could tell the guest she was offended by that word because her children are biracial. We encouraged her to do so. It is great when our guests want to attempt some conflict resolution, peacefully, on their own.

A mom came to the office very concerned that her baby had a high fever. She wanted to try to reach her husband who was supposed to be staying at the UGM Men's Shelter. When we called to locate him, we were told that he had checked out. The mom started crying and said, "I knew it."

Friday: A mentally and physically impaired woman came to the Shelter. She was very sweet, said she had a fight with her mom. One staff listened while another called her home. Dad came at 5 p.m. to take her home, but she did not want to go. We let her stay for awhile. She spent a lot of time in back crying.  She finally called Dad who came and picked her up at 9 p.m. We let her keep her purple PJ's and purple toothbrush. Purple is her favorite color.

A volunteer came in with clay, large drawing paper and crayons. He also brought in healthy snacks and drinks for the children. The kids had lots of fun making different sculptures with the clay and then drawing and coloring on the blank paper. Another volunteer showed up, and between the two of them, they were able to take the kids to Oasis park. The kids had a blast running around at the park.

Saturday: We had 17 children show up for the Bible study - 8 were returning from the previous week and 9 new kids. This week's memory verse was Philippians 2:13: "For it is God who works in you to will and to act in order to fulfill his good purpose. There was one 7-year-old who could recite last week’s verse which was 1 John 4:14. Five did their weekly devotional and received a prize and two completed their devotional book.

In her reflection on the 50-year anniversary of the War on Poverty, Jennifer Marshall makes an excellent point: "Effective compassion means we need to take time to understand the problem...Typical poverty in America is deeper and more complex than simply material need—and our responses should take that reality into account."

Effective compassion = Understanding the problem. We couldn't agree more. If you want to increase your understanding of the problem, we invite you to come take a tour of the Crisis Shelter. Call 509.535.8510 to schedule a tour.