A Junkie No More 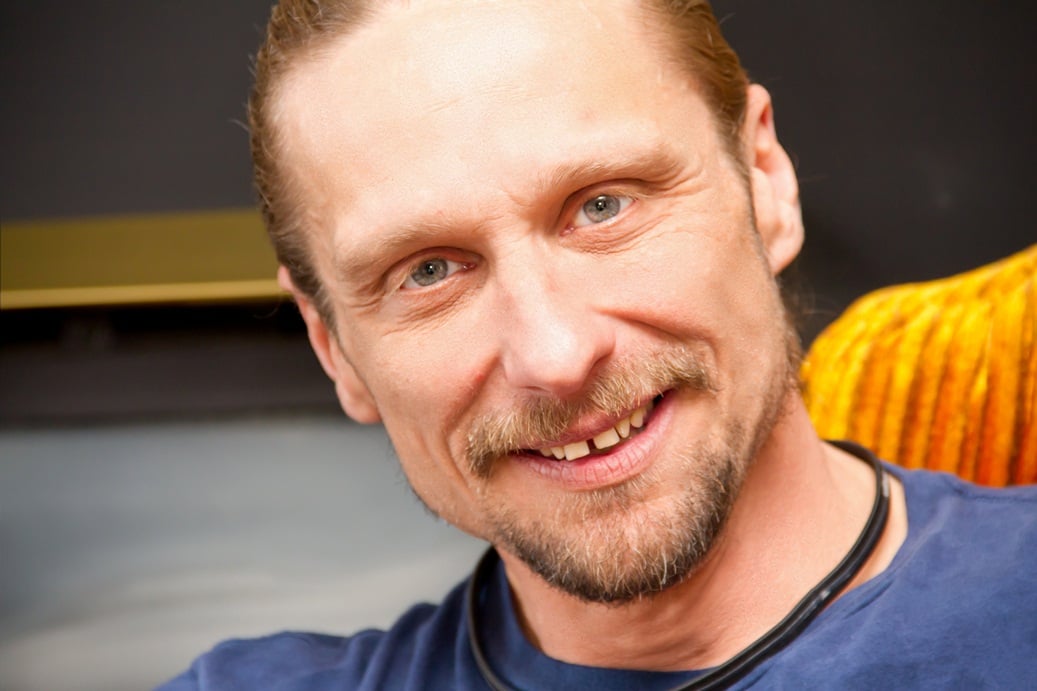 Eddie Collins was the subject of my first newsletter feature when I came to UGM in January 2008. He had arrived at the Men’s Shelter a year earlier and was nearing the end of the recovery program.

That interview with Eddie six years ago was an affirmation that I was in the right place. In my own interview when I was applying to be the writer for UGM, I told Phil Altmeyer I might not know much about homelessness, but I knew how to tell a story and I believed everyone had a story to tell. Eddie illustrated my point perfectly.

Eddie Collins is a musician, a painter, a husband, a father, a grandfather, a friend, a role model, and an enthusiastic lover of the Lord. He used to be a meth addict. He used to be homeless. But by the time I interviewed him, he had shed that identity.

“One of the big one-eighties I did in my program was to get rid of the old me and classifying myself as a junkie – not because I was still doing it but because I did it so I thought that was who I would always be.” Eddie said his identity change came during a class on the book, Search for Significance by Robert McGee. “I did not walk out of that class a junkie.” 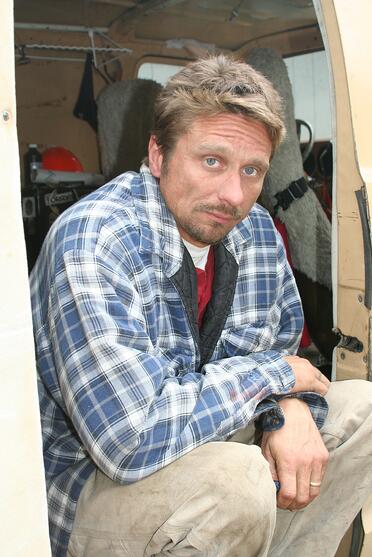 When I met Eddie, he and his wife, Kim, were divorced but in the process of reconciliation. Later that year, after Eddie graduated from the recovery program, they got remarried. Eddie went to work for UGM as part of the maintenance team, and when the Center for Women & Children opened in Coeur d’Alene, Eddie was hired as the facility coordinator.

While it was never part of his job description, Eddie became something of a poster boy for the Mission. In addition to the newsletter, Eddie and his family were featured at the annual banquet. He’s been on billboards, TV, radio and the featured subject of fundraising letters. On two separate occasions, he and Kim came to my church, led worship and shared their testimonies.

Eddie has a huge heart of gratitude and has given sacrificially to the ministry that helped him leave the old Eddie behind and start over.

He and Kim, financially stable for the first time in their married lives, bought a house. And now, they’re starting a business.

From Homeless to Business Owner

Last Friday, we held a send-off for Eddie as he launches into a whole new endeavor as the owner of Step Up Painting.

“When I finished the program, I vowed I would never be a painter again.” The painting business was tied to the old Eddie and held a lot of triggers. “There’s so much baggage that comes with the paint crew. They’re not well respected. They don’t take drug tests because if they did, there wouldn’t be a crew, you know, that type of thing. Alcoholics and drug addicts seem to gravitate toward the paint crew because they’re accepted there, and I just didn’t want to jeopardize my recovery by going back into that.” 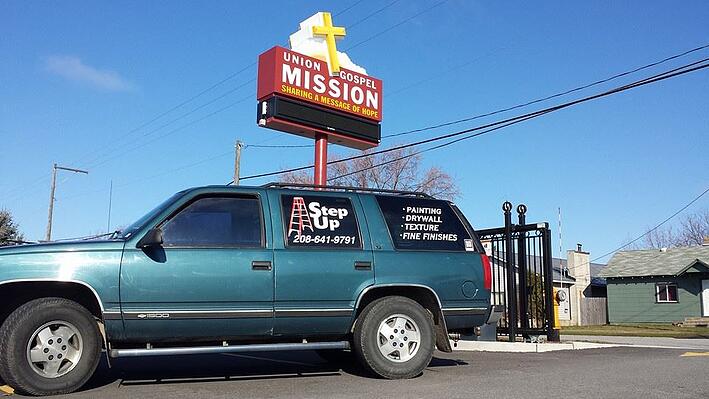 As part of the maintenance team, however, Eddie had the opportunity to start painting again, and he learned to embrace it. “I learned that I had a gift. There’s a talent there. I actually had something that a lot of people don’t, and I learned that I could do this in a way that would bless others.

God Is in the Redemption Business

Another way Eddie sees God moving in this paint business is in giving him an opportunity to work with his youngest son, Sky. Sky is a musician, but like most musicians, the making money thing is a struggle. “I don’t plan on Sky being a painter for the rest of his life, but…he wants to come up underneath me and learn the paint trade and work with me.” 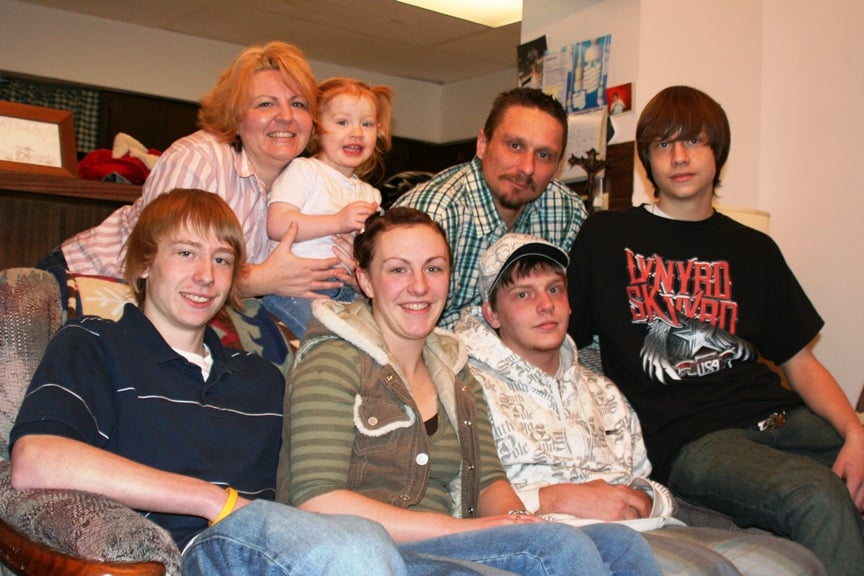 “The thing I was afraid of is the very thing I feel God calling me to do.”

While there are parts of the job he definitely won’t miss (“unclogging toilets), Eddie said, leaving the Mission will be hard, no doubt about it. “God has kept me here at the Mission for seven years to re-establish who I am, what my morals are and who I’ve become.” 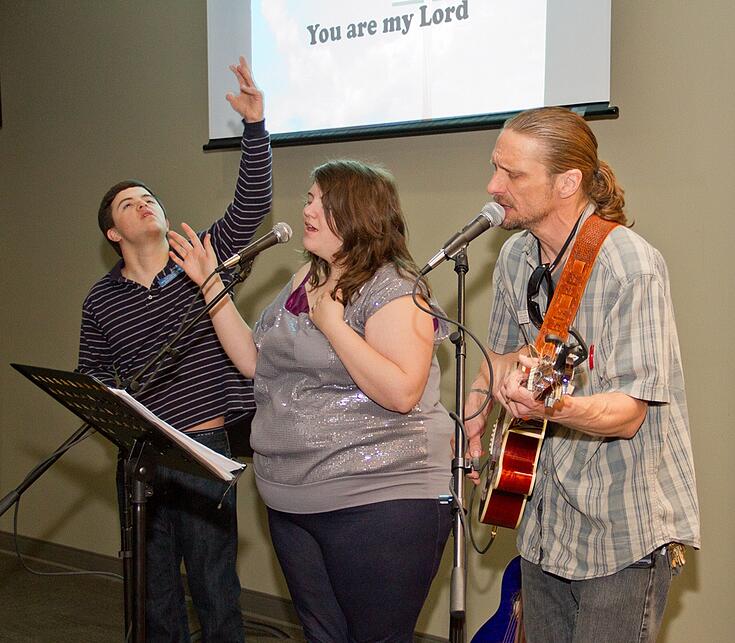 For the last year and a half, as the only male staff member at the Center for Women & Children in Coeur d’Alene, Eddie played a vital role in modeling what a healthy man looks like. “I realized really early at my job with CWC that these ladies and these kids may have never seen a good guy…I saw that God put me in a place to show them that there are good guys out there – guys who don’t look at them as a piece of meat or a piece of property.”

At the same time, the children witnessed that a good guy could also be cool. Guys don’t get much cooler than Eddie. He has long hair, plays the bass and loves to fish.

It isn’t easy to say good-bye to all that, Eddie said. 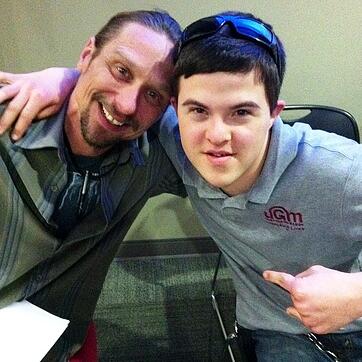 And then there’s Aaron. “Aaron is probably gonna be the toughest goodbye.” When he started his job in the summer of 2012, Eddie learned his first volunteer had Down Syndrome, and he panicked. “Seriously, I had a traumatic experience with someone with Down Syndrome when I was young, and so there’s always been an uncomfortableness.”

And yet, Eddie said, “It’s a volunteer. It’s the Mission. It’s a new job, and I have to go along with this. I was really rigid at first, but I kept walking through it, and in time, I started to see something in Aaron that I think is in Christ. I got to see agape love for everything and everyone. He doesn’t care if you have earlobes that are as big as a silver dollar or purple hair…He doesn’t notice any of that. All he notices is what’s in you, and he loves you for who you are…Once I figured out how Aaron loves, it became really easy for me to become his best friend. Really easy.”

We're excited for Eddie, and our sadness over his leaving is softened by the knowledge that he'll still be around. Eddie is part of a band, The Radiaters, that plays at the Men's Shelter once or twice a month and at the Center for Women & Children several times throughout the year. He's been leading worship as part of the Radiaters for over six years, and he has no intention of quitting now.

Eddie, we will miss you, but we wish you all the best in your new business. Go with God. We are praying for you.

Eddie is a licensed painting contractor in the state of Idaho. Contact him for interior and exterior jobs, drywall, texture and fine finishes: 208-641-9791 or eddie@Step-UpPainting.com or find him on Facebook. 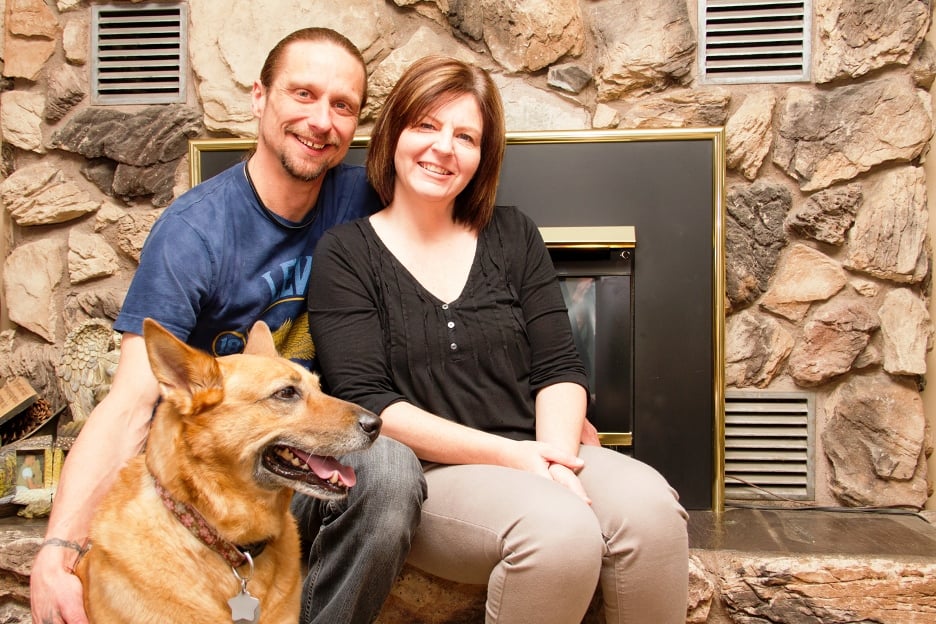