Caution to the reader: This story contains references to abortion, prostitution and human trafficking.

“Sarah, I really want to help you.”

Sometimes it’s as simple as one person reaching out and saying, hey, will you let me help? For Sarah Carr, this person was her sister.

Sarah had been trapped in a destructive lifestyle for over ten years. Her wakeup call was when her middle child was taken by CPS. “That’s ultimately what caught me by my grippers, you know. That was my big eye-opener. Like something’s got to change. I mean, I needed something.”

She didn’t know where to turn, so the call from her sister was a godsend.

“My sister has relatives that went through this program,” Sarah told us. “So, she was like, ‘Sarah, I really want to help you. I know this program called UGM Recovery.’ I had never heard anything like it in my life. So I got on a Greyhound bus and I came here. They accepted me as soon as I applied.”

Sarah’s path into the world of drug addiction and prostitution is a painful one to recount. Her mom and step dad were alcoholics, and her biological dad was a heroin addict who spent most of Sarah’s life in prison. “It was very chaotic, growing up. Inconsistent.”

But her life took an even worse turn when she was gang-raped at fourteen years old. “From there on, I found myself in and out of school,” she said, “skipping school, hanging out with the wrong people, and then I became homeless.”

At sixteen, she started using heroin.

“Being gang-raped opened up many doors for nothing good in my life at all. I found myself homeless and struggling with my addiction, and I had no place to go.

“So, two friends from junior high reached out to me and they were familiar faces. And that was the worst day of my life. They were like, ‘Hey, come out with us for the weekend,’ so I went with them.” The house they brought her to was the base for a sex-trafficking ring. From then on, that’s what she was taught. “I was molded and groomed into it. I could go on forever about what happened there.”

For the remainder of Sarah’s high school years, she existed in a nightmare. Eventually, however, she managed to escape and catch a ride halfway across the state. She wanted to start a new life, far from the reach of those who ran the operation.

“But I still had a problem with drugs,” she said. “At this point, my body was completely addicted. And I hadn’t had a job, of course. I was so young. So, I did the only thing I knew how to do: I started prostituting on my own. I was coming from a place where all this trauma kept building and building. That’s all I knew. I found work at strip clubs and online. I thought, ‘At least I’m choosing it now instead of them choosing it for me.’ So, for some time then, I was living a life that was very destructive. I had abortions and miscarriages. I had three children who are alive and well. It’s just like, living this life of just nothing but shame, day in and day out, and addiction. You’re stuck in this thing you don’t know how to get out of.

“It keeps adding up to you’re nothing,
this is all you’ll ever be.”

But by the grace of God, Sarah was able to open her eyes to the truth. On a quest for a better life, she moved half-way across the country, to North Idaho. “One day, I wake up and find myself with children and an addiction and my oldest is turning five, then six, and starting to see that Mommy’s not working normally. It wasn’t something I wanted to raise my children in… so I decided to make a change for my life. For my kids.”

This was around the time her second daughter was taken from her custody. Sarah became desperate to change, at all costs.

After connecting with her sister in Idaho, Sarah came to UGM as quickly as she could. “I got in the day they opened back up after COVID.” She entered with a desire to leave behind all aspects of her former life. “I wanted to get everything out of this program that I possibly could. I am so grateful for this chance.”

Sarah has been invested in her Recovery for just shy of twelve months now. She’s building a resume, working with CPS to regain custody of her child, studying the Bible, learning how to have healthy relationships, even getting her teeth restored. She is rebuilding everything she can. “My entire life has changed. Every piece of it. I’ve learned things like communication. I’ve never had healthy communication. I’ve never had boundaries. I’ve never not had sex be a part of my life, you know? Now I have new life through Jesus Christ, and he has given me new purpose. I no longer have to give away my body to anyone, for it is a temple of Christ that should be loved and valued.

“This whole life is new. Every bit of it. The UGM program has changed my entire life. Coming here was the best decision I’ve ever made.” 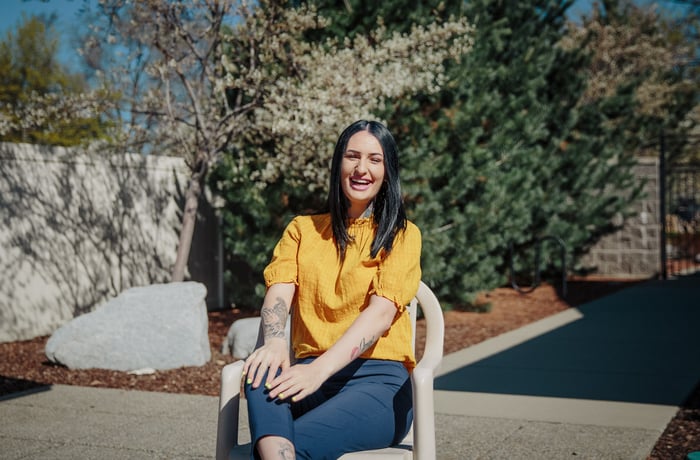 Sarah still has a journey ahead of her, but she has embraced the free gift of new life in Christ; and Union Gospel Mission is here for her as a family, a safety net and a hub of practical resources. UGM Women’s LIFE Recovery program helps women heal from the inside out and establish the foundation for a hope-filled future.

Today, Sarah just got accepted into her business practicum. She dreams of helping women and teens in situations similar to what she’s experienced. “I want to be a positive voice and minister to people that need help.”

To be the hand that helps women like Sarah, consider signing up to be a UGM Impact Partner.