Derek Mobley could be working with lobster and filet mignon on a daily basis as a cook at the Spokane Country Club. Instead, he’s figuring out how to use moose meat confiscated from a poacher and how many turkeys it takes to feed over 1,000 people on Thanksgiving.

Derek chose to leave the world of fine dining (before the country club, he worked at the Davenport Hotel) to work alongside and feed some of the most vulnerable people in our community as the kitchen supervisor at the UGM Men’s Shelter. 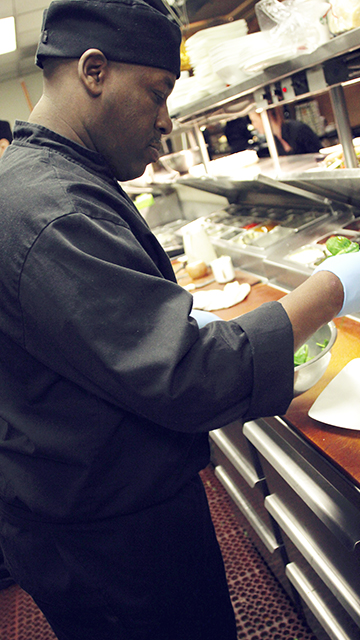 “I wanted the job because I wanted to give back and to say thanks for what was done for me, for putting me on a path and showing me that I am worth something.”

Derek came through UGM Recovery himself, and his gratitude led him back here as an employee.

Even though he helps to prepare hundreds of meals each day, Derek said, the job is about so much more than cooking. “It’s more of a brotherhood. I meet men from all different backgrounds. I listen and reassure, encourage and teach some simple skills. This job is all about coming alongside a man and telling him, ‘Everything’s gonna be OK. You’re doing a great job here today’ and putting a little light on his life for a minute.”

The Value of Encouragement

His own experience has taught him just how valuable that kind of encouragement is.

“Material things – I had all of that – but I was still lonely because I didn’t have that love, and I was missing the true meaning of the Holy Spirit in my life.  So I would, you know, question myself, look in the mirror and have a beef with myself about who am I, where am I going, what am I doing, and I didn’t have any answers. 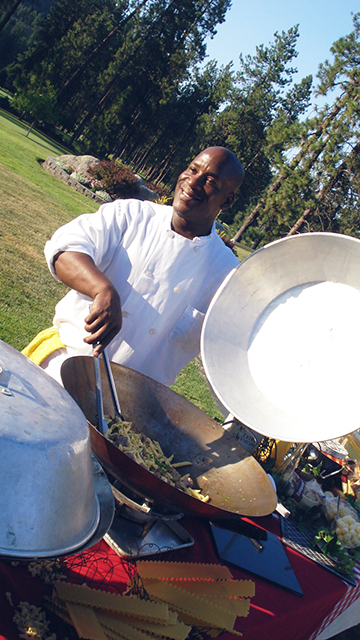 “Drinking and drugging would take away the pain – for the first drink and the first drug – but then it would come back times ten late the next day or later on, and I just didn’t really want to address it at that point.”

Being surrounded by a loving community at UGM enabled Derek to face his demons in a way that other treatment programs had not.

The Value of Honesty

“I can’t really dismiss the other programs because people may get clean out of those programs too.  I think you have to be ready to get clean, but this program, they allowed me to talk, and most of the times, I could answer my own questions just by talking.

“But they really invested time in me, in asking me to be honest.

Being honest wasn’t easy for Derek.

"I was hiding. Didn’t nobody know the whole Derek. They just knew one part of me.  I like to laugh, I like to have fun, but they didn’t know, you know, the pain, the lonely nights.

“…all my skeletons in my closet, I had to open that, and trust Him.  And once I did that I realized that I was not unique, that even here in Spokane, there are brothers just like me. They may not look like me, but they got the same exact problems that I have.

“And once I found out that I wasn’t unique, and my skeletons were revealed, it was easier for me to start healing.”

Derek knows the value of having someone willing to listen, a teacher who is patient and encouraging, and that’s what he strives to be – all while helping to prepare 1,000 meals a day.

If you're interested in helping to feed the hungry or coming alongside men and women in the process of rebuilding their lives, click on the link below to learn more about volunteering at the Union Gospel Mission.

Breaking Bread at UGM
Recovery in the Kitchen
Food Partners: A Win-Win Relationship
Setting God's Table at a Homeless Shelter
Feeding the Hungry, Body and Soul