Scripture doesn’t tell us a lot about Mary’s feelings on the eve of giving birth to the Savior of the world. We do know she had never been pregnant before, never given birth, and now she was newly betrothed, heavy with child, in a strange city with no place to stay.

She had just come off a multi-day journey of 90-plus miles, riding a donkey. 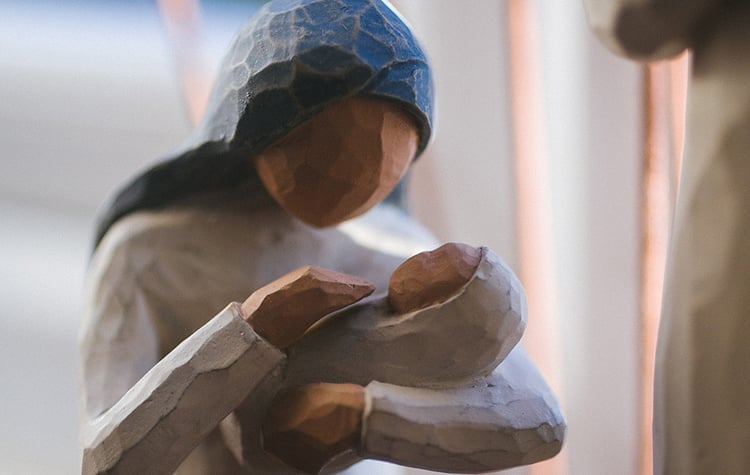 And she knew—from the angel’s message, the miraculous conception, the words of Elizabeth—that this was no ordinary baby. She was giving birth to the King of Kings, and yet, here she was in the humblest of circumstances, earnestly seeking a place to stay, a place to welcome her baby into the world.

There were no rooms in Bethlehem because of the census. But Joseph and Mary kept knocking, kept asking. And finally, an innkeeper made room in his stable.

It strikes us as profound that God the Father chose to beget his own holy Son within an unmarried, unsheltered, teenager’s womb.

Clearly, God was doing the unexpected. He was turning things upside down, as can be seen in Mary’s own words earlier in the Christmas story:

He has brought down rulers from their thrones
but has lifted up the humble.
He has filled the hungry with good things
but has sent the rich away empty.
(Luke 1:52-53)

God continues to do the unexpected, to fill the hungry and to lift up the humble. Again and again, he makes clear that he loves the poor and brokenhearted.

Single Moms with Nowhere to go

We recently sat down with Debbie, a resident at the UGM Crisis Shelter.

“I was hopeless. I was lost. I was stressed out.”

Debbie was eight months pregnant and living in a rat-infested apartment. She’d been to UGM’s Crisis Shelter years before but had left to pursue her addiction. Now the surprise pregnancy made her want to try again. And try harder.

“I’m a breast cancer survivor. They told me I’d never get pregnant without fertility treatments,” she says, holding a chubby, healthy baby boy. “That’s why I named him Darian, because it means God’s gift.”

Debbie moved from her apartment in Seattle to stay at Isabella House where she could receive temporary housing and care during the birth of her baby. But when her time there was up, she faced her biggest fear: “I didn’t know if I was going to have to go back to Seattle. I was scared that I could lose my child because I didn’t have a place to stay.” She wanted to get temporary shelter at UGM, but their family-sized rooms were full because of COVID restrictions. Even if she managed to pull together a deposit for an apartment of her own, she knew, with an eviction on her record, it would be next to impossible to convince a landlord to rent to her.

“I prayed about it,” she said. “If this door [UGM] is supposed to open, then I’ll go. If not, then I know I’m supposed to go back to Seattle.”

The next day, a room opened up. 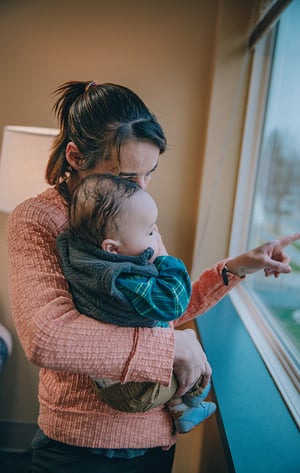 “So, I came here. Since I’ve been here, I was going to go into Women’s Recovery at Anna Ogden Hall, but God opened different doors for me, like housing resources, schooling and job opportunities.” She’s working with an employment and housing case manager. “I got connected with a program to become a certified peer support counselor – so I get to help other people too!”

Reconnecting with her father was a huge reason she made the move to Spokane. “My dad is a drug and alcohol counselor. When I was in Seattle, I reached out to him and he reached out to me on Facebook and I got to tell him he had a grandson coming. The whole time, he’s been a huge moral support. And he was at the hospital when my son was born. He got to cut the cord. I didn’t have a stroller or car seat, and as soon as he was born, he said, ‘Hey, I’m going to go get you a hamburger and a stroller and a car seat.’ And he brought back some clothes for the baby.” Debbie smiles. “And he takes me to church every Sunday.”

Today Debbie in on track to be able to support herself and get into a decent apartment by the end of winter. And she has a community that cares for her and her son. “Since I’m working and putting money away, I can stay a little longer,” she says.

“This place, the staff is amazing. They’re super helpful, even giving advice in a very constructive way. When Darian had gas, they had ideas to help me with him. And it was really good. Being a mom on my own is like, what if I don’t know what to do? They’ve worked with me.

"Being here gave me my hope back.”

“This place will be a part of my life forever. They helped save my life.” --Debbie

Tanisha’s life went a different direction, but she also found her way to UGM.

“I was a runaway at fifteen and had [my baby] at nineteen. I didn’t want a little girl on the streets, so I put her up for adoption. I stayed on the streets with her dad for a while until I got my own place and that’s when I started using. I got myself into meth. I did three years of that. I went to jail.

“Looking back, I know that God wanted me to go to jail because he didn’t want me to use anymore. And I didn’t want to either. I was trying to stop. God and my best friend saved me. I ended up moving to Spokane with my best friend, and from there, I got into UGM. And it’s a good place.”

Tanisha was honest with us about why her life took her down some dark paths. “I’m learning I don’t have boundaries. I’ve learned it’s okay to say no, but it’s hard for me.” 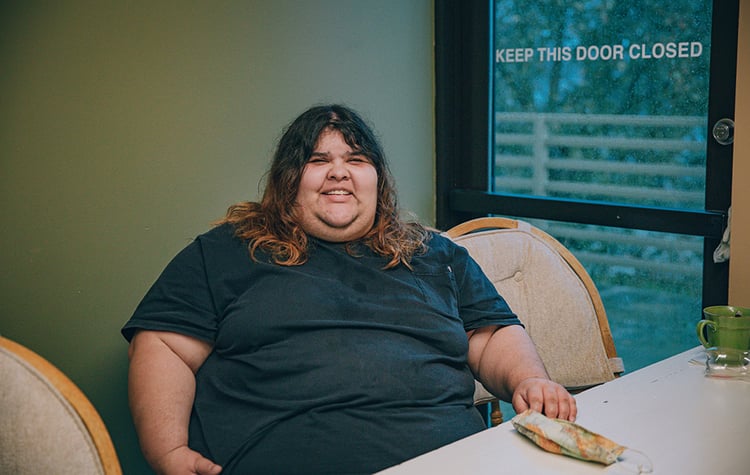 With the goal of becoming a God-dependent, contributing member of society, Tanisha has entered a job practicum, received financial counsel, and has had help connecting to housing resources for the near future when she has money saved for a deposit.

And she’s already dreaming of giving back. “Eventually I want to help people, maybe have my own restaurant that helps the homeless.”

Tanisha smiles talking about her daughter. “She’s doing really well, and I can talk with her, and even visit, pretty much as often as I want.”

God has sheltered Tanisha. He has protected Debbie. He has guided them both. They have sought change, and they’ve been surrounded by people who are able to support that desire for change. Many have yet to find that safety net, that community. And there are many who are still living rough with children in their care.

Because of Christmas, we know that God's will is not dependent on earthly circumstances. We know his favor rests on the poor and humble, that he accomplishes his purposes through unlikely people in unlikely ways. And we know he makes room in the inn for all who seek him.