Jolene is beautiful. Her cheerful countenance overflows with love, especially for her two children.

Two years ago, she was sleeping in abandoned buildings and couch-surfing at drug houses. No home. No contact with her kids. No hope.

The Jolene we know today is a miraculous work of God.

“I worked so hard” 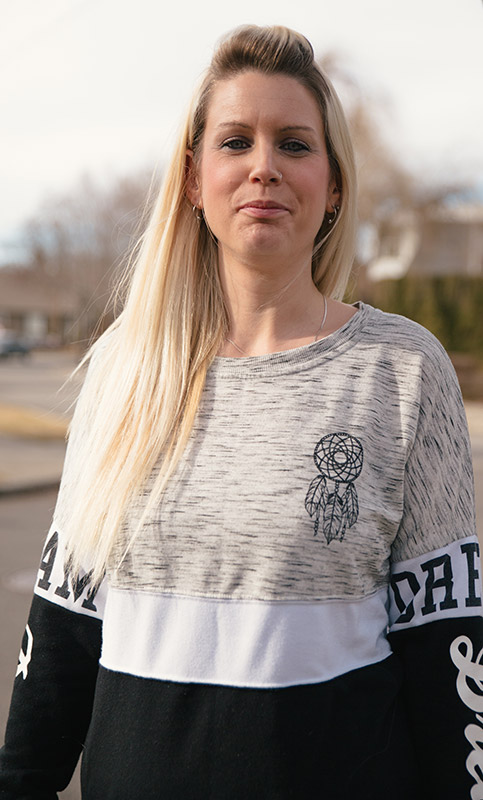 Being kicked out of her mom and stepdad’s home at 17 wasn’t the greatest start.

But Jolene tried. She had gotten into trouble with drugs in high school, but when she became pregnant at 18, she did the best she could for her son. She went through treatment, got a job, got a car, went to school – and then met another guy. When she found out she was pregnant again, she stayed in a bad relationship because she wanted a stable home for her kids.

“Growing up I was always made to believe that I was ugly and I wasn’t worth it. I could never do anything right. … I ended up with the same kind of guys that would tell me the same thing over and over again: ‘You don’t amount to anything. You can’t do anything right. … The only reason I’m with you is because you’re pregnant.’ ”

As her boyfriend’s heavy drinking and abusive behavior amped up the chaos in their home, she became less and less able to keep her own life together. She moved into her own place with her children, Trent and Shilo.

But her ex’s anger and violence took even more of a toll after she left. His incessant threats and demands during the custody battle for Shilo taxed her mentally and emotionally. Fear drove some bad decisions. Within six months, she began using drugs again, lost custody of her kids, lost her job, and watched her home burn down. 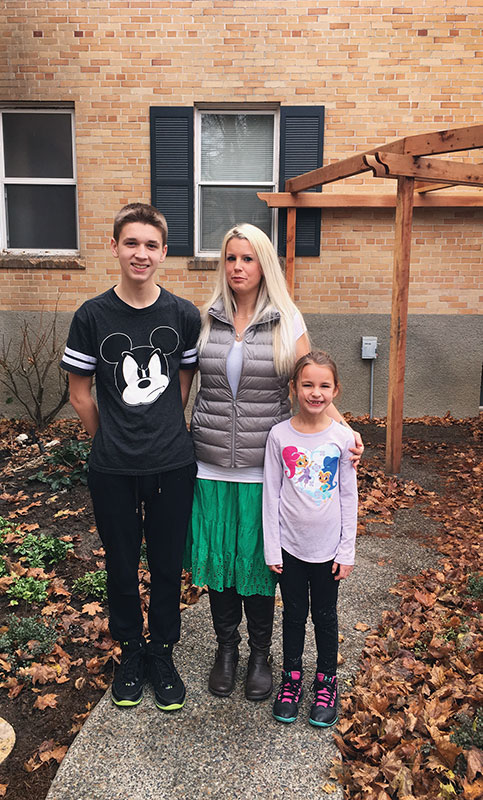 For years, Jolene had no contact with her children. She figured they were better off without her.

“All the people that probably could’ve helped me or the people I knew that were healthy, I shoved them away … When you’re homeless and you’re using, you’re hopeless. I was hopeless.”

It didn’t even cross her mind to go to a shelter. “I thought I could do it on my own. … I didn’t want to live like that anymore, but I didn’t know how to ask for help. You don’t ask for help when you’re on the streets.”

The change started when she got a semi-regular job. Keeping a work schedule helped her stay clean for a while, but she knew she couldn’t keep it up staying in a drug house.

Agonizing for hours before (and after) the decision, she finally chose to come to the Crisis Shelter.

The shelter’s routine gave her a taste of the stability she craved. Doing the educational modules was how Jolene first learned about God and decided to put her faith in Him.

“I thought, ‘Gosh, who is this guy? Who is this God?’ I kept wanting to come back… to hear some of the things He had done for people and who He was and how He cared for the people like me. I was like, ‘Is this true?’ ”

God began to show her it was, working out all of her circumstances, desires and challenges for her good.

First, there was the temptation to go back. When she went to retrieve her belongings and told her old “friends” about her plan to go into Women’s Recovery at Anna Ogden Hall, they scoffed and tried to talk her out of it. By God’s grace, she fought through the doubts they planted in her mind and decided to keep moving forward.

“What’s the worst that could happen?” she asked herself. “What more could I be doing than what I’ve been doing? Nothing has been working. I keep saying that I can do this myself, and I try, and I can’t do it myself. So I need help.”

Shortly after she started the program, Jolene heard her daughter wasn’t safe. Shilo’s father had gone to jail and Shilo was being passed around among family members and friends.

Instead of panicking and taking matters into her own hands, Jolene chose to trust God. “I wanted to do things right.” On top of the demands of the program, Jolene tackled the daunting legal system to find her daughter and get her back. She went to the courthouse week after week to file and correct paperwork.

Finally, the miracle happened: a fellow recovery resident on the way to her son’s school had a “chance” encounter with a girl named Shilo. That same day, a judge signed an order allowing Jolene to pick up her daughter at the school; they were reunited after 3 ½ years.

“I was intimidated. It was kind of discouraging a couple times. But I’m telling you, [God] orchestrated everything, every step of the way. When I got her, I just couldn’t even believe it.”

“Get some truth poured into it”

Jolene’s restoration wasn’t always quite so dramatic: Overcoming her fear of judgment to find a supportive church. Learning how to read the Bible. Being forgiven and rebuilding trust with her son. Relying on God’s protection instead of allowing herself to be bullied.

The poor self-worth she’d carried since childhood also had to be fought with truth over time.

She recalls her ex’s verbal abuse: “I don’t even know exactly what he meant when he said those words: ‘You never will be saved.’ That was part of his thing.”

What she does know is that he was 100% wrong. “I have been saved! Jesus saved me. Everything he said I wasn’t, I am now.”

So, when fear and anxiety start to well up, “I talk to my mentor, or I talk with my kids. I don’t sit and dwell on it. I speak up about it to somebody. That was something I didn’t do before…ask for help. … When I get some truth poured into it, I can calm down about it.”

That truth, in a nutshell, is that Jesus is everything Jolene needs. “He has taken care of me. He’s proven to me more than enough. And just because something doesn’t happen right away or just because one day I might not feel the greatest, I know He’s still in there, working in me.”

It isn’t hard to find external signs of what He’s doing: She’s thriving in her new job. She’s moving into transitional housing to build her rental history and saving up for the next step. She’s getting more involved in her church and sharing what she has with others.

“God put me in all these places and situations. He put me there for a reason. I am here for my kids. I’m here because I want to show them that there’s a better life. I want to be able to let people know that there is hope.”

Celebrate the love and power of Jesus to transform lives like Jolene's! Please join us for our Easter sunrise service at 7 a.m. Easter Sunday morning.

Click here to see all articles for the March 2018 issue.