Feeding the hungry, sheltering the vulnerable and restoring people into the community through the gospel sounds like very admirable, spiritual work. Here's the thing: Sometimes "spiritual work" requires a lot of labor that doesn’t look very spiritual. But even the most practical members in the UGM family understand that their work has a deeper significance: “Whatever you do, work at it with all your heart, as working for the Lord” (Colossians 3:23, emphasis added).

Pat Bren is one of many UGM staff who see a very practical job as a ministry  opportunity. As the head of housekeeping at UGM’s central campus, he works daily with UGM guests to maintain a safe, healthy environment for residents, volunteers and staff. Every day, he has the chance to come alongside men who desperately need someone to believe in them.

Pat was born and raised in Spokane, went to Northwest Christian School and married his high school sweetheart. All his adult life, he’s worked with his hands in commercial remodeling, painting, and repair work. After moving to Wenatchee and working for the school district there, Pat found his dream job as facility manager for one of the larger churches in Wenatchee, managing a small team of workers. His wife also held a director’s position at the church. They loved working there and never wanted to leave.

But God had other plans. When Pat’s daughter began the process to adopt twins she was fostering, they told her they would move back to Spokane to help her if the adoption went through – “not thinking it would ever happen,” he says with a smile. “But the Lord worked it out, like he does.” The adoption went through. Pat and his wife resigned their dream jobs and moved to Spokane.

Pat began working in custodial services at the Spokane school district, where talking about his faith wasn't allowed. It was a tough transition after working at a church. When he bumped into Mary Beth Salisbury, his former English teacher at Northwest Christian, she said he should check out the job postings at UGM. He applied and was offered the housekeeping supervisor position at the Trent campus.

Pat knew just finishing his career with the school district would have given him a comfortable living in retirement. “That would have been the ‘better’ decision, but I look at being 67 and I just wasted 6 years. Whereas here, I’m able to speak into the guys’ lives, ask them where they are spiritually … and we’re able to talk about that, where I couldn’t in the school.”

Before Pat came to UGM, homelessness was on the edge of his awareness. He had served meals at a small shelter in Wenatchee, and he knew Spokane’s homelessness problem had gotten worse while he was away. But still he avoided eye contact with the panhandlers he felt like he saw on every corner when he returned to Spokane.

Working at UGM was an eye-opener.

“The Lord just kind of threw me into the lion’s den. When I took this job, I had no idea how to interact, but the thing I realized is there are so many different reasons men are here.”

Pat met men who still had jobs but had lost their homes for any number of reasons. He met men who had lost their jobs after many years and struggled to start over. He met craftsmen whose trucks and tools – i.e., their livelihood – had been stolen. He saw the toll of addiction in many. But overall, he saw that “these are good men and they’re worth investing, putting our time in.”

“I think it was just something the Lord wanted me to go through and learn how to love these men.”

Nearly four years in, Pat has seen enough to know even the “failures” aren’t the end of the story for the guys who come to the shelter. He recalls one man who had completed the recovery program but came back to UGM after a year, having lost his job and sunk into depression. Pat gave him another chance as a resident supervisor.

“Slowly the lights came on, and pretty soon he got a job. It’s easy to want to give up on people who have gone through the program and kind of failed. But here he came back and we lifted him up and helped him. And now he’s still working and successful.”

When Pat took a side job to earn a little extra, that man was Pat’s supervisor.

Pat is a big piece of the puzzle for the men getting back to work. As housekeeping supervisor, he oversees 17 resident supervisors who handle up to 60 men working in all aspects of custodial, laundry, and groundskeeping duties at UGM’s central campus on Trent Avenue, which includes the Men’s Shelter and Recovery Program as well as the ministry-wide administrative offices. 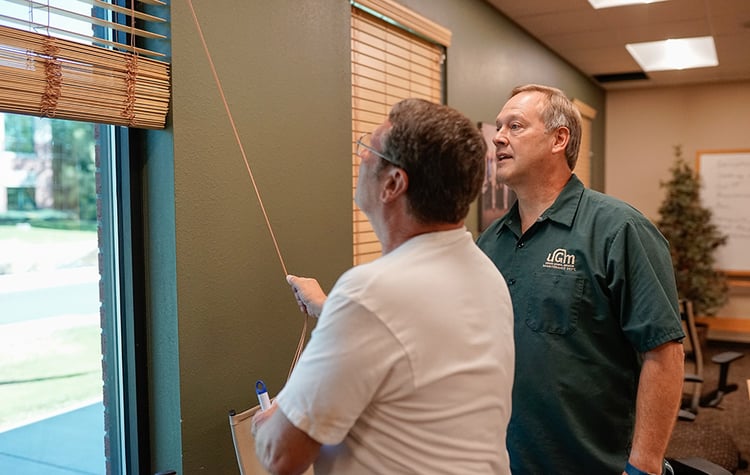 With 100 to 150 guests each night at the Men's Shelter and dozens of staff working on site, you can imagine all the cleaning, laundry, yard work and other upkeep that goes into maintaining a nice environment for the people living and working here. The laundry area, for example, works from 5 a.m. to 11 p.m. every day just to stay on top of all the sheets, towels, pajamas, and personal clothing.

Virtually all of this work is done by shelter residents. Pat's job is to keep them organized and scheduled so that the jobs get done to a high standard, and give the men valuable work experience in the process.

Recruiting supervisors, Pat’s always on the lookout for men who are ready to move forward and grow in responsibility, usually by entering the recovery program or the Employment Ready program. Each guest at the Men’s Shelter completes at least 2 hours of work therapy per day, and supervisors work as much as 6 hours daily. Keeping 17 supervisors in place, trained and able to lead others, takes a lot of Pat’s time and effort. But it’s also his greatest opportunity.

Pat regularly meets with each supervisor one-on-one to monitor their progress with a WorkNet tool called PADMAN. (That stands for Presentation, Ability, Dependability, Motivation, Attitude, and Networking: Click here for more information!) PADMAN is designed to help the men grow in the areas that will help them get a job, keep a job, and be promoted to greater responsibilities.

Pat explains that PADMAN is one way work therapy at UGM is more than just chores. By simulating the structure and expectations of a “real” workplace, work therapy helps people gain experience, skills, and confidence to get and keep a permanent job. As their “boss,” Pat addresses workplace issues like punctuality and respectful attitudes without mincing words. Even so, he has a reputation among the men as a guy who really cares about them individually.

PADMAN meetings and other opportunities give Pat a chance to connect personally, get to know residents as unique people, and offer spiritual encouragement.

“I just ask them where they are on their spiritual journey … We’re just able to dialogue. I usually give them the Pat Bren Revised Version of what I feel like the difference is between man’s religion of Christianity and God’s intention. That he loved us so much that he created us first with a purpose, and he has a purpose for them. After we failed, he still sent his Son to die for us, and Christianity – following Christ – is a movement to follow him. Sometimes we make it into a religion of ‘If you are good and deserving, you’ll be in God’s good graces and be able to get to heaven.’ … He knows we sin. He just wants us to give our lives up to Him and not try to do the measuring thing of feeling ‘good enough.’ ”

For men who often see living at a shelter as a sign of their failure to be good enough, the Pat Bren Revised Version can be the very words of life. “When they do meet the Lord, you just see a huge change.”

Pat has no regrets about his move to serve his family and UGM.

“You need to follow your heart when the Lord prompts you to do stuff. It may be hard and I don’t think he ever said it was going to be easy.”

It isn’t! On top of managing supervisors and schedules, Pat handles procurement for the many cleaners and other products needed to keep the campus safe and sanitary. Under the recent conditions caused by the Covid-19 pandemic, he’s had to hustle to stay on top of finding and ordering scarce resources such as sanitizers, toilet paper, and disposable gloves when they’re available. He also researches what alternative products might be used and how to use them, so he can train the people under his oversight to work safely and effectively. 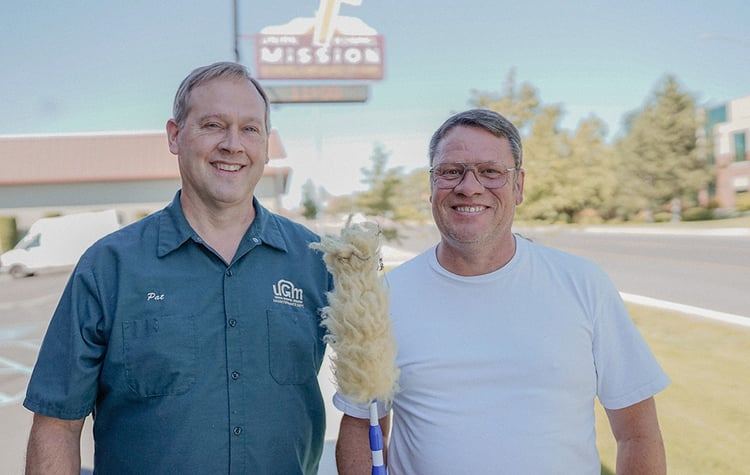 Pat’s efforts to get the necessary resources have paid off. “So far, the Lord’s blessed us to where they’ve always come in, we’ve never run out. But we have to think ahead.”

That’s one lesson Pat sees playing out in his life as well: God provides. Life isn’t what he expected - but it’s certainly good. Pat’s daughter and twin grandsons live with them and are thriving. He’s teaching the boys how to ride their bikes. He makes chocolate chip and marshmallow pancakes for breakfast on Saturday mornings when their other grandkids stay over. He’s blessed to be a blessing.

“One thing I always tell guys is, ‘Listen to your wife.’ Because my wife early on told me, two years before we moved, ‘The Lord is stirring in me that there's going to be change.’ And I used to ignore that and say no, and I’ve just learned through the years when the Lord starts stirring in her and she tells me that, I need to pay attention, because I’m soon going to be stirred. That whole move, quitting our jobs with two good-paying, full-time jobs, the move back to start over... I have no regrets because that’s where he led us both.”

Looking for a way to get involved? We've got (just a few) ideas!