The inimitable Dean Whisler just marked 10 years working at the UGM Men’s Shelter, where he’s now the Social Services Manager. We asked him a few questions about what his world is like. 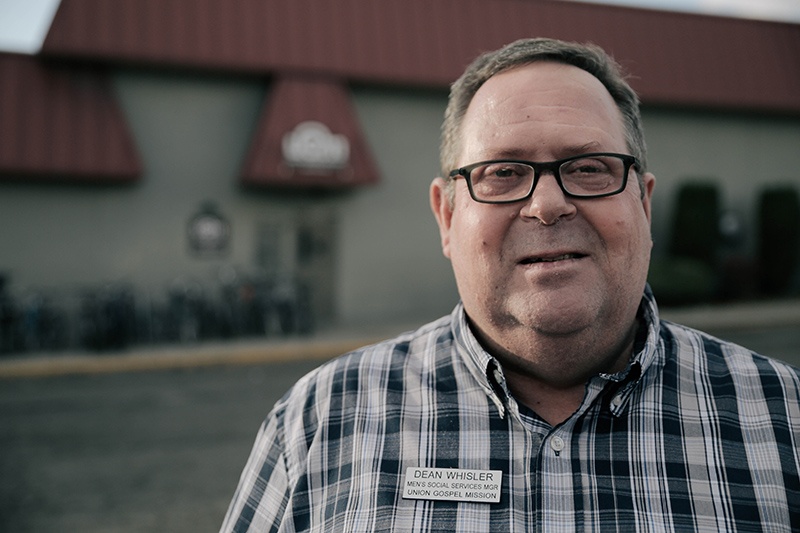 Tell us about your background.

My family moved to Chattaroy from San Diego when I was about 8 or 9. We were a churched family. Around junior high I resented it because it seemed like we were the only family on the block ever going. I was a normal high school kid, played sports, was involved in school activities and my church youth group.

After I graduated from high school, I got into my own addiction issues and kind of ran away, back to San Diego, when I was 21. I lived there for 16 years and had a fairly successful career working in restaurants as a midlevel manager. For about 20 years, I felt like God had abandoned me, but in reality I had abandoned him. In 1999 I realized I wasn’t following the Lord anymore.

The “drugs” that my parents planted in me – drug to church, drug to the woodshed, drug to do chores, drug away from the TV – regrew. I “re-accepted” the Lord and re-learned what it was like to be a Christian.

I moved back to Spokane in 2004 and have been attending Turning Point Open Bible ever since. I also teach fourth- and fifth-grade boys’ Sunday school classes.

How did you get connected with the Union Gospel Mission?

I got my bachelor’s degree in program management from Whitworth in 2007. Program management was a direction for someone that wanted to be in management in nonprofit, social service, or religious settings. There came a point in my life when I said, “The second half of my life has got to be about others and not self.” And it’s so much more rewarding. I knew I’d have a better chance serving the Lord and honoring him by working in a Christian environment where I can give back.

Three months after I graduated, I saw a job listing for Day Room Supervisor. I had never worked with homeless people, but I’d worked with at-risk and abused children through college. After several interviews, UGM took a chance and hired me.

I was pretty much solo for 6 years, except for a couple of interns. Then they hired a Day Room Manager and asked me what they should call me. I said “Social Services Manager sounds cool.”

Can you give us your job description in a nutshell?

I do a lot of case managing for men who want to enter our programs. I monitor the men’s work therapy and assign the jobs for the men in the Employment Ready Program and LIFE Recovery Program. I network with other agencies to find out how they can help us or we can help them. I’m the administrator for the ERP; that’s sort of my baby. We’ve got about 15 men in the ERP.

What are some of the agencies with whom you most closely collaborate?

Frontier Behavioral Health, DSHS, SNAP, veterans’ organizations and the law enforcement agencies.  We all don’t have the answer to everything, and we need to collaborate: “You’re an expert in that? Great. Here you go. This is what we specialize in.”

One of the things that makes UGM special is the law enforcement community knows that if someone is coming out of jail and is going to be homeless, they’re going to have a better chance of being successful if they come here, because we’re a clean and sober mission. So we get calls to help people leaving jail.

Frontier will call us when they have a patient who is transitioning out of their system or someone who will be homeless. More often, we make appointments with them for men in our population who are dealing with mental illness.

Something I’m proud of is the relationships I’ve developed with other agencies. When I got here, we weren’t known as a big collaborator.

What are two things you’ve learned over the past decade?

The biggest thing I’ve learned is: The homeless people that are in our shelters, by far, are safe, they’re kind, they don’t want to hurt people, they’re not the bogeyman. In fact, they’re the opposite: They’re frail, they’re lonely, and they just want people to listen to them and try to help them. They’re not the bad guy on the corner that’s going to try to hurt you or rob you. My perception of what homeless people were has changed.

One thing I’ve learned recently is how our population rises to the occasion when we create an environment where they partner with us and give back instead of just “here, here, here’s more.” When they feel like they’re part of the community and they’re contributing, the vast majority of the guys respond well to being given responsibility and want to do that.

Why is case management a critical component of ministry to homeless men?

Case management is like our version of the surgery on “M*A*S*H.”  The east door is the entrance to the UGM MASH unit. We’ve got a certain amount of time to get to know what brought a person “off the field” and into our mission. Is it just a nick, a minor wound?

Through the case management process, we’re able to determine whether this person just needs to be patched up and rest, and then is ready to go back out there and look for work, go back to their family, find an apartment – or if they need real heart surgery and need that helicopter ride to Tokyo General, which is the recovery program. Whatever their condition, we’ve got to jump on it right away and figure out what we can do to help them before their situation grows worse.

We have five or six volunteer case managers that just work with the guests, and I have two that work with me with ERP men and the long-term recovery program.

What do you think is the most commonly misunderstood aspect of your work?

Helping homeless people takes time. Every once in a while you get those miracles, but it’s hard work and you need to go back to the well a lot of times before you’re going to see some fruit.

Can you tell us a story that summarizes why you do what you do?

Yesterday I had a developmentally delayed teenager come in with his teacher aide because he wants to learn how to help homeless people. He got a tour, had lunch, and afterwards he was just so excited. It was just so cool, it was natural; we didn’t have to create that excitement.

The video that was recently posted of the baby and the dad: that’s why I do what I do. That little boy’s face, that little smile.

When an ERP guy gets a job and they show us their first paycheck, and when we see them get up and put their work clothes on and head out, that’s what gives me joy.

What’s a success story that has encouraged you especially?

We recently had a young man, married with a baby who’s in foster care. He started the ERP and got a job at the Thrift Store. He’s doing fantastic. He’s so eager and full of life. His wife got a job at a fast food place. Because he was working he was able to move back in with her. They made the very difficult decision – although they were reconciled and the marriage was stronger – that they were going to have to give the baby up for adoption. And they were in a much better, stable place to be able to do that and realize that it was for the best. It’s a good story, but it’s not all warm and fuzzy. Not everything gets wrapped up with a pretty bow.

One young man who started coming here around the time that I was hired, just turned 18, was in and out for six years. Every time he said, “I’m going to make it this time.” And it was just like, “Keep trying, we’ll be here for you when you’re ready.” There were several cycles of that. After multiple tries, finally he joined the recovery program and he’s doing quite well now.

Tell us about a volunteer who has blessed you and the men you serve together.

I utilize two volunteers. One helps evaluate men for the programs, and the other one does ongoing case management. Steve’s been with me for about six years and is quite skilled. And then Mike, a very mature Christian who retired from Frontier Behavioral, helps me with case management for the ERP men. They both have blessed me by helping me and lightening my load, my work.

Tell us something that might surprise people about the Men’s Shelter or your work in particular.

In the last 10 years, the clientele has gotten younger. Ten years ago, a typical guy was 40-ish and came here because he was mainly just a hard drinker. The second drug of choice was meth. We didn’t have a lot of heroin, cocaine, or opiate addicts. But now, they’re 30-ish, and they’re getting younger because meth, opiates and other street drugs are bringing them to their rock bottom quicker. Alcohol usually takes a little longer to do that.

Is there a scriptural truth that you cling to in the midst of difficult times at work?

II Corinthians 3:5 keeps me humble: “Our only power and success comes from God.” One of my life verses is a very long chapter: Isaiah 61. It’s a great song too.

You have a bit of stand-up comedian in you. Why is that important in your role at UGM?

I inject my weird brand of humor because one of my favorite lines is “We plan, God laughs,” so why not laugh with him? When I start to get stressed and take some things too seriously, I’ll tell myself, “Dean, God’s in control.” My job is just to do the best I can. Having a sense of humor keeps you sane and humble when you’re helping people.

If I want to be known for one thing, it’s that I’m someone who affirms people. I prefer catching people doing something right versus something wrong: “Good job, way to go.” Many of our clients have been told all their lives that they’re never going to amount to anything. My heart is to love and affirm people just like Christ does for me.

Dean learned it’s better to live for others than for himself. One way you can do that is to volunteer!

Easter Series: What Does Sin Have to do with Homelessness?
Winning Essay: What I Wish People Knew About Homelessness
Addiction Recovery: A Healing of the Heart
Honoring Jerry Reese: An Authentic Man
A Look Inside Men’s Recovery