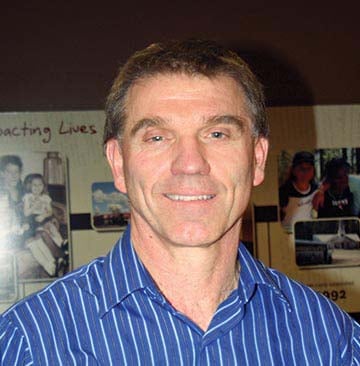 Long before Randy Altmeyer was old enough to work, he was part of the Union Gospel Mission. His dad, Harry Altmeyer, was a board member and the family helped put on chapel services at the old Men’s Shelter on Browne and Spokane Falls Blvd. Something about that experience must have stuck because Randy later chose to devote 30 years of his life to serving homeless men.

Randy, who retired at the end of August, described himself as “passionate about wanting to help people. I just love to interact with people who don’t have what other people have.”

UGM Director of Ministries Sonny Westbrook expressed much the same sentiment when he addressed Randy at his retirement luncheon: “As I think of you, I think of the word ‘compassion’ because you illustrate what Jesus taught, that though there’s 99 safe in the fold, you have sought to never forget the people that are outside.”

With one of Randy’s trademark half-smiles, he told about his early days on the job: “When I first came, I was daddy's kid. The whole Mission was kind of a rough place, and they've got a different way of breaking people in. I didn't find it out until later, but they figured, in about six months, they could make it hard enough for me that I’d want to leave. But after a while, you get established. People get to know you, they respect you. Just sometimes, they want to give you a run for your money.”

Six months turned into 30 years and a wealth of experiences. One of the most fit over-60-year-olds you’ll ever meet, Randy particularly enjoyed engaging the men in physical fitness and recreation: bike riding, boxing, running, calisthenics…You name it, Randy could go the distance with men half his age.

And he’s not stopping now. Randy will still be preaching in the UGM chapel on Monday nights for Celebrate Recovery, and he and his oldest son, Caleb, have started a new ministry, HRC, which stands for “Help Reach our Community.” To learn more and read a longer interview with Randy, go to blog.uniongospelmission.org/passionately-serving.