It takes five years actively pursuing recovery for an addict to have a strong chance (about 85%) of lifelong recovery.

Five years minus the length of our recovery program leaves a gap of at least three years in which our clients are most vulnerable to relapse.

That’s a gap we’re working to bridge. Just like the program, the transition back into society must consider the needs of the whole person – spiritual, social, emotional, mental and physical – to be sustainable.

In the holistic recovery program at the Center for Women and Children, Christi realized her addiction was less about chemical dependence than about her shifting identity. She was addicted to a “mask” - becoming like whomever she was with, desperately trying to belong.

Growing up with six siblings, Christi was her family’s “easiest” child because of her compliant personality. But suffering bullying during much of her childhood, that tendency was magnified so that Christi lost hold of her identity completely.

Carrying a burden of shame and a desire to escape, she moved out on her own at a young age. “That was when I discovered alcohol ... And I was the girl that was passed out at every party, 'cause I'd never drank before and I drank hard.”

Without a well-formed identity, Christi found hers in others. She married and stayed with a man who sexually assaulted her and abused drugs. When he used, she used. She was his breadwinner and caregiver and helped hide and minimize the consequences of his violent behavior. She hid his dangerous side from her family and others. She became his mask.

“I had been by my man’s side, ride or die, [when he was] losing his job, fighting for him, doing all the stuff, all while he's treating me like crap ... and I’m the bad guy the entire time.”

Even though she didn’t really know herself, she didn’t like what she did know. She tried several times to overdose on sleeping pills in a way that would look accidental.

Eventually, Christi found out her husband was having an affair. “He told me it would be selfish of me to make him decide [between them], because we'd both always wonder. And so I agreed.”

But she’d finally reached a point where she knew she couldn’t continue that way. Days later, she left everything and brought her two children “home” to North Idaho. 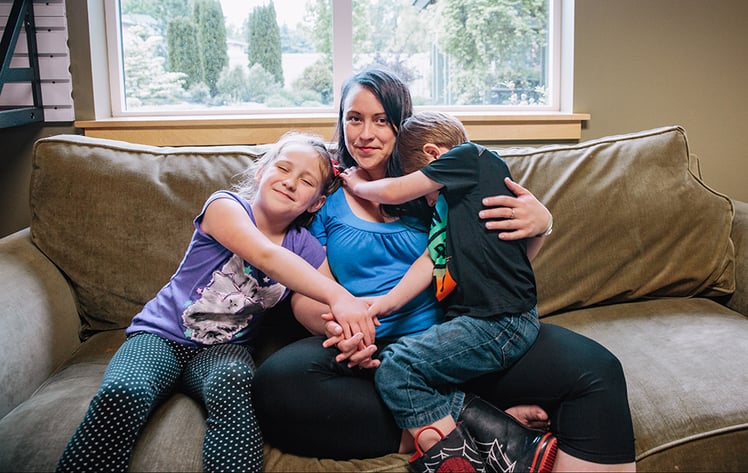 Christi had escaped, but she was still broken: Staying here and there with family members and friends, her children were the only reason she wanted to keep living.

“I came in [the Center] because my kids needed a shot, and that was what really brought me through the doors, because I didn’t deserve a shot.”

But Christi quickly discovered – for her children’s sake and her own – she needed to regain her own identity. She found some of the process kind of “crazy,” but she began to grow through the Christ-centered classes, counseling and honest self-evaluation. She learned she could have a voice of her own rather than just blending in with those around her.

“In the beginning, it was telling my story, and actually giving validation to the things that my whole life weren’t okay to talk about. … Being okay to have a story and being okay to be upset about it.”

Though she’d believed in Jesus her whole life, Christi struggled to believe He actually loved her. But during one worship time, she looked up at the cross in the chapel: “I saw a look in His eyes that wasn’t the agony of, ‘Look what you’ve done to me!’ It was, ‘I got you, little girl. I can do this. You can’t do this, but I can, and I’m happy to do it. It hurts and it’s no fun, but I’ve got you.’”

Knowing her identity in Christ, Christi is finally starting to like herself and to see the gifts God has given her. “I am compassionate. I am stronger than I think. I’m resilient. I’m creative. I’m tender. I’m really, really good with kids.”

Christi knows she needs to be careful in choosing her environment as she moves out of the Center. Knowing her tendency to be influenced by others, the best way to stay on the recovery path is to surround her family with safe, uplifting people. And just like the program, her transition plan includes all aspects of life:

Housing. Christi is excited to be the first one to move into UGM’s new transitional apartments adjacent to the Center. She’ll pay rent and live independently, but she’ll literally have support right next door when she needs it.

Accountability. Living in the transitional apartments includes formal accountability measures to help residents stay clean, sober, tobacco-free and connected to ongoing recovery support. Christi knows that structure will help her stay the course where she might stumble on her own. “I'm really, really grateful that I get that opportunity.”

Spiritual connection. In addition to her daily time with God, Christi has mentors, supportive family, friends, a small group and a church family at All of Life church in Post Falls. “I do have my safe circle and I’m going to continue to receive the healing and the fulfillment of having relationships that are healthy.”

Satisfying work. Christi had a business practicum opportunity and was hired to work in the office at Xcraft, a Coeur d’Alene company that makes commercial drones. The job gives her family-friendly hours, and the company has trained her to be able to take on more and more responsibility so she takes pride in her work.

Christi is one of more than 25 people being honored at the LIFE Recovery Commencement June 25. Check our Events page for details. Hope you’ll join us!

Click here to see all articles for the June 2019 issue.