Trace spent 15 years intermittently homeless, fluctuating from employed to unemployed, living on the streets or in an RV without heat, running water or electricity. “A box on wheels.” The thing he longed for most? A shower.

“It’s embarrassing. You’re nasty, you know you’re nasty. And I got to where I didn’t want to go look for a job unless I had [a shower] because it was just too humiliating.

“You don’t think anybody cares, and you really don’t want them to because you smell bad and you don’t feel good about yourself.”

Looking back, Trace sees his anger as almost a bigger problem than his homelessness. 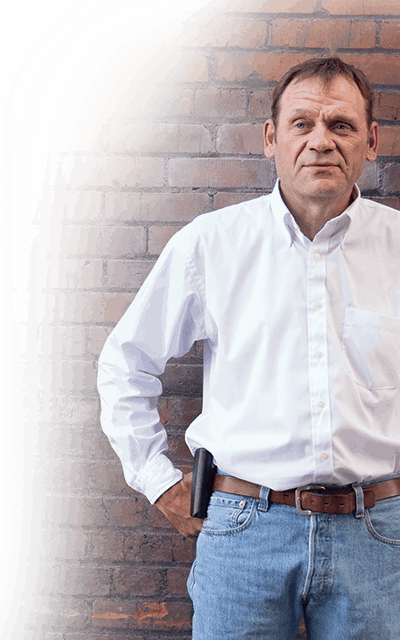 “I was pretty much functioning off anger most of my life.”

As a child, Trace said he thought his mom hated men. “My mother was very abusive, especially to males. She tried to crush my male ego, my dignity, my identity. And I fought that tooth and nail with pure, unadulterated anger.”

Anger remained his companion throughout most of his adult life and stood in the way of his ability to build relationships. “I never let anyone really get to know me.”

When he got married, the anger seemed to flow both ways. His marriage ended in divorce and, even more painfully, separation from his
daughters.

Trace worked to drink and drank to escape the reality of being apart from his children. But eventually, his drinking caught up with him. Unemployed and homeless, “I had no hope left in life.”

Ashamed, Trace came to UGM. “I had no idea there was a place like this. I thought it was just me all by myself. I’ve got to do everything. Period.

“When I walked into the Mission, it sparked something in me, and I went, ‘Wait a minute. This is an organization that’s got one thing on their mind, that’s to help you.’ I finally had to sit down and go, ‘Okay, I’m either going to finish drinking myself to death, or try something else.”

Thankfully, Trace chose to try something else. He joined UGM LIFE Recovery and graduated earlier this year. He stopped drinking and faced some harsh realities. Over the course of the two-year program, he dealt with his pain, anger, and loss. He developed a close relationship with God and experimented with what it means to have fun Trace-style. (A putting range in the counselors’ hallway and Nerf gun raids between classes are two of his legacies.)

Trace is still fighting for the chance to have a relationship with his daughters. “I can never quit being their dad. I’m gonna try to turn things around.

“I still have the same obstacles I had before I got to the Mission, the same battles I was fighting, and I don’t know how they’re gonna turn out any differently. I just have hope.”

A job. An apartment. Hope. That’s the difference your partnership is making.

“It still amazes me, people I’ve never met have donated money and resources to pull me out of the gutter, put me back on my feet, and give me my dignity back.”