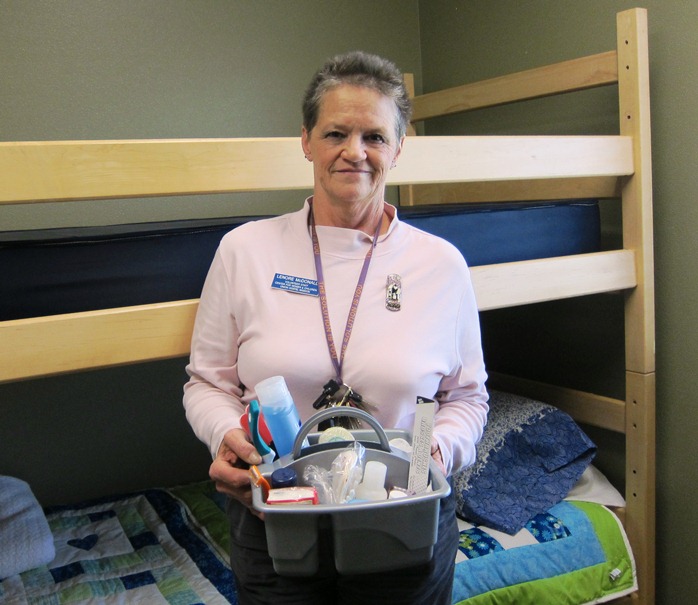 Lenore puts together the welcome baskets for new guests at the Center.

From my perspective, Lenore McDonald is a volunteer extraordinaire. She says it was only by an act of God that she came to serve at the Union Gospel Mission Center Women and Children in Coeur d'Alene.

After losing her job in July 2012, Lenore spent the following six months searching for a job, while juggling a strained marriage and a life in turmoil. She says she came very close to being a resident at UGM during this time of uncertainty. 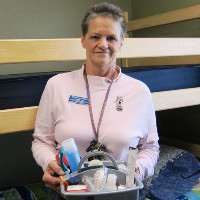 Lenore was at a crossroads; she took God’s hand and followed him into UGM.

She has been volunteering at UGM for nearly a year and has an ever-changing role as a Resident Assistant. Lenore spends at least three days every week at UGM helping with whatever is needed to keep the program running. There is not a task too large or too small for Lenore. She is an open book, with an air of transparency that is welcoming and warming to those around her. “There are no secrets in my life,” Lenore explains, “they are only detrimental to my health and relationships." Her commitment to confronting issues head-on is a blessing to residents, staff, and volunteers, who know they will always receive honest and straightforward feedback from her.

Lenore says she has grown closer to the Lord while serving at UGM. Things that used to worry her don’t bother her anymore. When you watch how the residents interact with Lenore, it is obvious she is loved. She is greeted with hugs and smiles, and sought after for prayer and encouragement.

Topics: Center for Women and Children in Coeur d'Alene, Rescue

Gratitude on the Recovery Journey
Uncommon Care: Part One
From Anger to Depression to Attempted Suicide
Volunteer Profile: Biker Bob