Business Owners vs. the Unhoused: A False Dichotomy

A false narrative is being promoted that pits two groups against each other on the subject of homelessness in Spokane.

That narrative goes something like this: Businesspeople are greedy and heartless. They do not care about people experiencing homelessness; they only care about making money. They just want people on the street to disappear. Homeless advocates, the ones handing out food, tents, sleeping bags and other street-life necessities, are the people who really care, and if you disagree with them in any way, you are not a compassionate person. 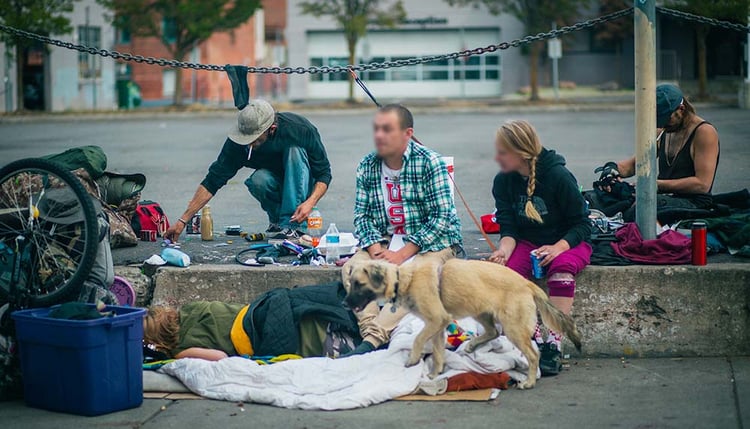 For the City of Spokane to make headway in resolving the issue of homelessness, there needs to be less finger pointing, less attacking, and more listening, more bringing to the table of all stakeholders with a vested interest in the welfare of our city, including our most vulnerable citizens living on the streets.

Toward that end, last week I sat down with Sheldon Jackson at Ladder Coffee inside one of the buildings he owns on Riverside Ave. Sheldon owns Selkirk Development and Revamp Panels. He is also part of a loosely organized group of businesspeople committed to making Spokane the cleanest and safest city in the country. As part of that effort, Sheldon has been driving a short route downtown six days a week for six and a half months. His goal is to assess what a visitor to Spokane might see when scouting sites for future conventions, etc., “hot spots,” Sheldon calls them. He then reports his findings to the city and his business group.

I found Sheldon to be a thoughtful, articulate, caring individual who is passionate about Spokane and making it a great place for the entire spectrum of socio-economic classes. Selkirk specializes in the redevelopment of rare and historical properties and exclusively works in urban areas. “Every building has a story” is their tagline, and Sheldon himself believes mixed-income housing with lots of shared, common space is the only way to do development. Now, Sheldon does not/cannot represent all Spokane businesspeople, any more than one unhoused person or one political activist represents the entirety of those groups, but what follows is an abbreviated version of our conversation, one which convinced me that Sheldon cares about Spokane, cares about people who are hurting, has good, solution-oriented ideas on the subject of homelessness and should be part of the conversation going forward.

“As business owners, we have choices. We don’t have to be in Spokane. We could be somewhere else, but we love Spokane. We’re not willing to give up on our city.”

In answer to the accusation that businesspeople don’t care, Sheldon replied, “The only thing you’re going to get with businesspeople is that we’re logical. You have to be logical to run a business. Some people think that’s cold. But solutions are solutions. We’ve got to raise up the whole society. 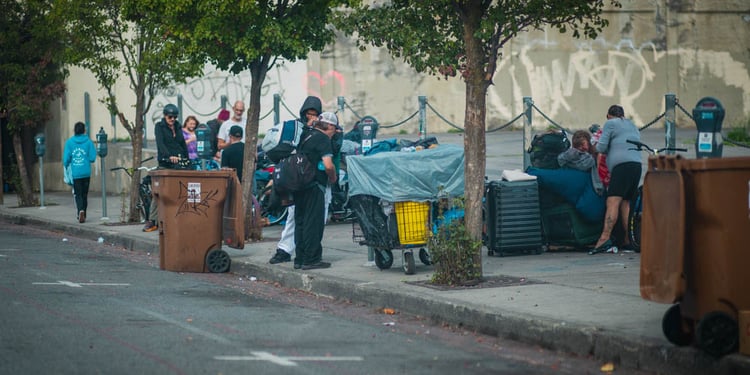 “We are problem solvers. It’s what we do every single day.”

Why wouldn’t we, as a city, want to put the problem-solving skills of successful businesspeople to work on a social issue like homelessness?

Sheldon did not grow up with the proverbial silver spoon. “My grandfather was an alcoholic. My mom, heroin and alcohol. My uncles, heroin and alcohol. The worst sin I ever saw was my uncle prostituting his wife for drugs. And, no matter what we did, it never worked because there was never the decision by them to step up. There never was that hard decision. They are all dead – not necessarily from overdose, but cirrhosis of the liver and other issues. They all died from the process and never got out.”

Sheldon says that whenever his mom and uncles got to the critical point of life change, someone always stepped in to rescue them and prevent the hard decision.

“When people have addictions or mental health problems, we cannot make the decision for the person. It doesn’t work. The person has to make the decision. They have to decide they are going to change, but when you enable them, you are hindering that decision. You are delaying it – maybe forever. So, it is important for us not to enable, to allow these people to make a decision that could change the rest of their lives.” 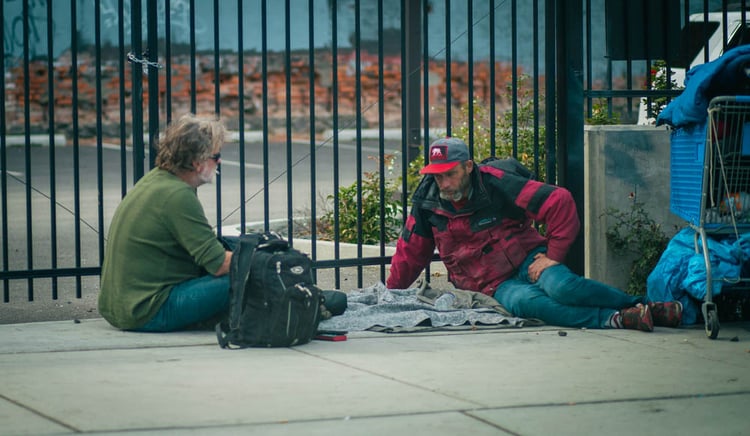 Now, “enable” is an emotionally charged word. Plenty of people will be triggered by it, but it’s important to keep listening. While Sheldon disagrees strongly with what is currently being done, his disagreement stems from its lack of effectiveness, the fact that he believes people are actually being hurt more than they are being helped. It’s not that he doesn’t want to do anything.

“The worst scenario is to do ‘tough love’ and then not be there for them. That is the worst thing we could do. My belief is, don’t enable, but the moment they make that choice, we have to have services and we have to have open arms. We have to be there to take them in and go, ‘YES.’ Help them make the tough decision and then be there with open arms.”

A Glass Half Full

Referring to a recent article on Spokane homelessness in the Inlander, Sheldon said he is a glass half full sort of person. He believes in a year the efforts of the business group of which he is a part will be making a significant difference. Even though he sees things as being bad right now, he is hopeful about the future.

“I think, at the end of the day, we can all agree that we want a safe and clean city and that we want to figure out how to help the situation. What is being done now is not solving the problem.”

Most service providers agree that the streets are not a safe place for people to live. People living on the streets are more vulnerable to crime and violence, as well as inclement weather.

Sheldon and the group of which he is a part are putting together a plan to provide these services in connection with housing, all privately funded. They’ve been researching the responses in other cities – both successes and failures – and looking at the science. The group firmly believes that housing alone will not solve homelessness.

“Housing is not the savior. You can’t have housing only because all you’re doing is hiding them away. To me, that does not seem compassionate. That seems selfish. There have to be services first – mental health and drug rehab, medical services, all there waiting.” 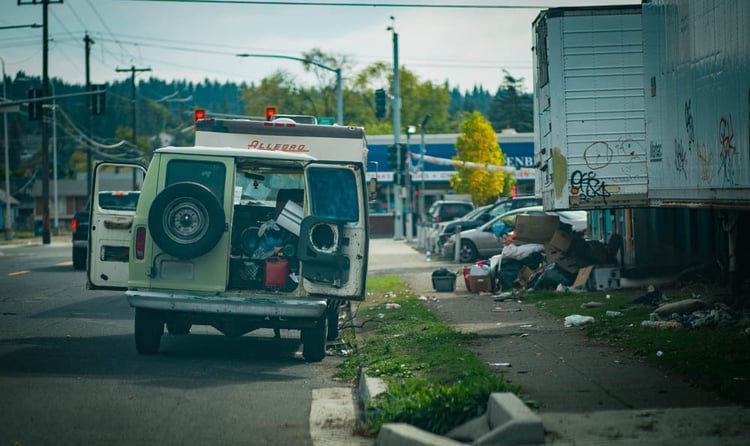 Sheldon would love to see all the stakeholders – businesses, service providers, advocates – come together and move toward a common goal, “but keep politics out of it.” 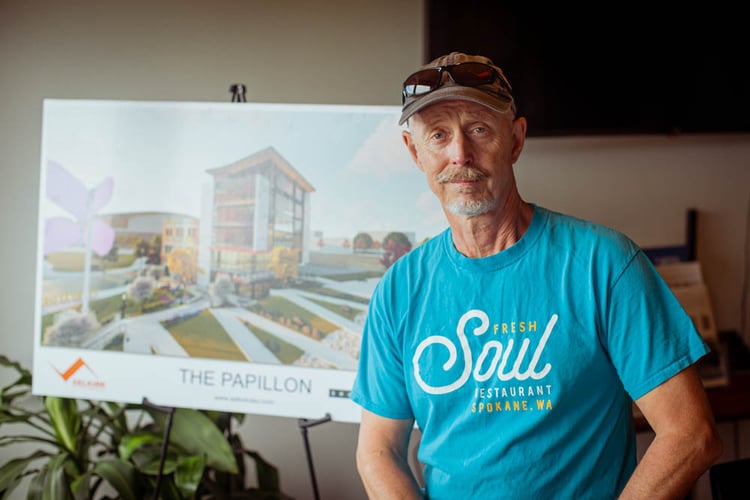 Be a part of the solution. Download and read the free e-book below.