The Spokane Police Department is piloting a new approach to dealing with homeless encampments. The idea is to clean up the camps while also offering resources to the individuals living in them.

In order to get a close-up view of the new program and see how it’s working firsthand, I rode along with Officer Jake Willard for a morning. Officer Willard and fellow Officer Dale Wells are only allowed to enforce illegal camping laws when there is shelter space available. 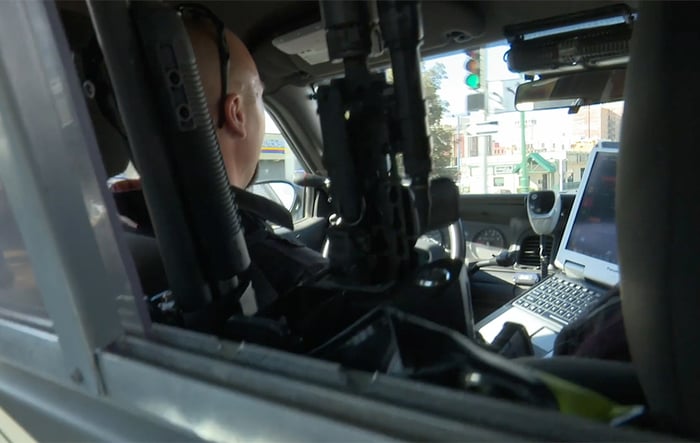 On the way to Cannon Park and our first campsite, Officer Willard reflected on his first 30 days. His job prior to this assignment was as a neighborhood resource officer on the South Hill – dealing with quality-of-life issues and neighborhood complaints – so enforcing illegal camping laws has been a stark change.

Overwhelmingly, the people he encounters are struggling with addiction issues, he said, and while he and Officer Wells both offer a variety of resources, they have seen little interest from the people living in the camps. Still, the citations the officers issue direct people to Community Court, where, again, the emphasis is on available resources.

Officer Willard admitted to being somewhat disheartened by the process, but in the next breath he expressed nothing but compassion as he told me the following story.

The day before, he had encountered a couple who had set up camp in a downtown park. They both had outstanding warrants, and he needed to take them into custody. After booking, he knew they would be released to take care of their belongings and clean up their area, but who would watch over their stuff in the meantime?

The couple suggested a woman resting on a nearby bench. As Officer Willard approached her, he was overwhelmed by the smell of rotting flesh and noticed that her hand had turned color. She lifted up her sleeve to reveal multiple watches all the way up her forearm, one of them so tight it had cut into her flesh all the way to the bone. She was clearly disoriented, confused and unable to care for herself.

Officer Willard called an ambulance and she was taken to a nearby hospital. He deeply regretted not having a mental health professional with him to ensure she received the care she needed.

Our first stop was at Cannon Park, where a couple had set up a fairly elaborate camp. Underneath a tarp, the officers discovered the couple sleeping with pillows, blankets and sleeping bags. The presence of these elements – an obvious sleeping arrangement – is necessary to enforce the illegal camping law. He asked the couple to come out and to keep their hands visible. Both individuals had been cited previously for illegal camping.

After being cited for illegal camping, she was allowed to go through her stuff. A dump truck and clean-up crew from the Department of Code Enforcement – five men and a foreman – were standing by to clean up whatever she was unwilling to carry with her. 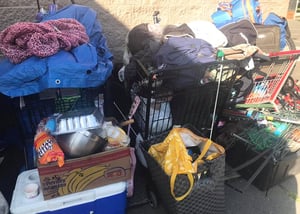 Painstakingly, the woman tried to decide whether to keep or trash each item: a hot tub cover, a paint roller, random pieces of pipe, a disassembled bike, sections of fencing…In the end, the clean-up crew left her to process the piles of stuff and agreed to come back later.

As the man was being taken to the police station, he shouted from the back of the patrol car: “Jessica! Jessica! I love you!”

Illegal Camping Along the Spokane River

The next stop was below Doomsday Hill, between TJ Meenach Drive and the Spokane River. Officer Willard said this was their fifth time back to this location in the 30 days since the pilot program began. The first time they came, they found a garbage pit 15 feet across and 4 feet deep, containing multiple five-gallon buckets filled with human feces.

"The dangers of leaving such issues unattended," said Officer Willard, "have deep and long-lasting effects for the public and environment...Just turning a blind eye will not serve the community nor the people who live in this beautiful city. This is a beautiful part of the country to live in, and we want to maintain it for all."

The schedule for the officers and clean-up crew is created based on calls to 311, where citizens report the need for camps to be cleaned up. They address as many as two officers can in four hours a day, five days a week.

One new camp had been reported in this location, but over the course of the next two hours, four were discovered – two occupied and two abandoned. Members of the clean-up crew scouted the woods, searching for the encampments – finding abandoned campfires, garbage, suitcases, sleeping bags, tarps and clothes.

The hillside was fairly steep and rocky, with the ground giving way under your feet as you climbed. All of the trash from the campsites – one yielding approximately 300 pounds – had to be hauled out across downed trees and rough terrain. (Code Enforcement estimates that 1,000 pounds of garbage per day is hauled out of homeless encampments in Spokane.)

The first campsite was occupied by a man and a dog. Another man who was camping with him and owned the dog was not present, so the camp could not be cleaned up. The officers and clean-up crew are not allowed to dispose of property in an active camp without the owners’ consent or providing a 48-hour notice to remove the property. The man present had an outstanding warrant for his arrest. He had missed his Community Court date. So he was handcuffed, cited and taken to the police station. (For an illegal camping violation alone, the individual is cited, given a date to appear in Community Court and released.) SCRAPS was called for the dog.

As Officer Willard talked to the man, he asked him how his life had gotten to this place. The man had left Utah to come to Spokane where his girlfriend was having their child. Things hadn’t worked out, and he found himself with nowhere to go. He broke down as he described his meth addiction. He wanted to change, he said; he just didn’t know how.

The last woman we encountered was in a very elaborate camp between two downed trees, with tarps stapled in place, multiple suitcases, piles of clothes, sleeping bags, pillows and blankets – almost all of them wet. She, too, had been previously cited for illegal camping. She admitted to using drugs that morning but insisted she wanted to get clean. She was on her way to Omak for treatment, she said. The officers suggested help was available right here in Spokane, but she said she had a plan. She held onto two full suitcases of clothes while the clean-up crew hauled away the rest. A pitchfork marked “City of Spokane Code Enforcement” was found in the camp, and she was additionally cited for possession of stolen property.

After all the garbage was hauled out and loaded into the truck, the team was heading to a homeless camp on private property when shots were heard in the woods behind us. The police officers responded immediately, moving the clean-up crew and myself to safety and calling for more officers. I was taken back to my car and so ended my ride-along.

I spoke with Officer Willard later and asked him what he wanted the public to know about the Police Department's efforts: "We want people to have opportunities to make positive changes, to have a chance to better their lives and contribute to this community and make it better for all. This is not a one department issue, this is a community issue, and it needs the attention of all that live here and care for their home. We need continued support from our community in all the efforts we are trying to make in this regard."

Reflections on the morning

The problems may seem so big that you don't know what you could possibly do about it. You can't fix it, but you can do something. Here's a free guide to help you get started.