At the UGM Thrift Store in Spokane Valley, you'll find more than bargains on high-quality clothing and housewares. You'll find the friendly faces of people who are thankful for the chance to do honest work. Dusty is one of those people.

After a 14-year struggle with drug addiction, Dusty's best intentions to get off drugs and earn a living weren't going to get far without a little help. "I had to apply for so many jobs ... I had to mark that I was a felon, so when you have a huge stack of applicants, why would you pick this one? I just needed a chance. I just needed them to meet me. I just needed to convince them that I could do this, and the UGM did that for me."

Dusty's spiral into drug addiction started with two car accidents and a prescription for painkillers in her early 20's. In excruciating pain, she took the relief they offered without fearing the consequences. “It was something your doctor gave you. It was OK.”

As she began to require more and more drugs to tamp down the pain, she began to get them by dubious means. In her grief after her stepdad's death, she transitioned into using meth. "I had to have a combination of pain pills, meth, alcohol, marijuana, this whole combination of stuff that I needed on a daily basis to function." 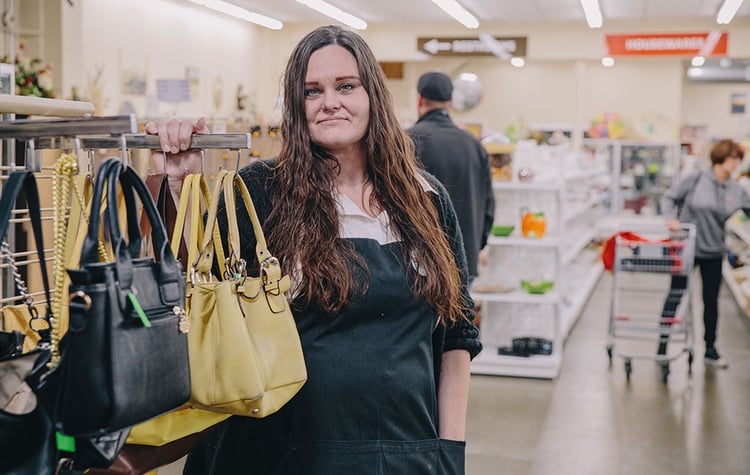 Dusty began to lose control of her life, and once it started, it happened fast. Dusty lost her job of 7 years with the school system. She lost her home. Her son went to live with his dad. “Everything just fell apart.”

The downward spiral quickened as she tried to fill the gaping holes in her heart. “How do you function? How do you get through the next 24 hours with not being a mom? It takes a lot of drugs to fill … your life that used to be.”

With no safe place to go, Dusty stayed in drug houses and did what it took to survive. She hated that lifestyle from day one, but she felt trapped. "I needed to be numb. I couldn't think about the family I had lost, the trust I had lost, the next person I was going to steal from."

After lying to get into a domestic violence shelter, Dusty was found out and asked to leave. She didn't know where to go, so they sent her to the UGM Crisis Shelter for Women and Children, then on East Sprague Avenue. That night, she saw something she didn't understand when a group of residents returned from church singing "Child of the One True King." 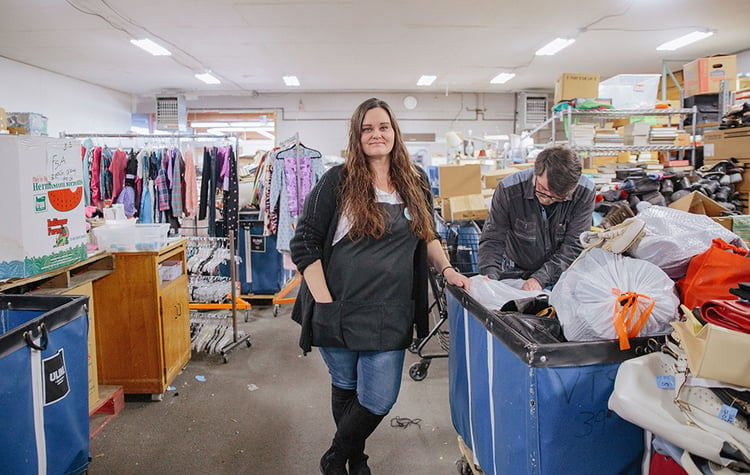 Even though it was hard to understand, Dusty learned that she would find unconditional acceptance at the Crisis Shelter. She relapsed and left the shelter over and over, but only found love when she came back. "I went through this whole cycle of it. And every single time at the shelter, they just said, 'We accept you. We love you. ... We believe in you. You're safe."

Finally, a life-threatening infection from intravenous drug use awakened her to the choice she had to make: She would either change her life or die. And for Dusty, recovery was a place: the Crisis Shelter.

"I instantly knew when I got sick that that was where I was going back to. ... Because that first time they opened the back gate, that Wednesday evening, they just loved me and accepted me and believed in me. I knew I had to go back there."

A Store Where Shopping Is Secondary

Dusty learned about the Thrift Store after she came back to the Crisis Shelter that last time. Even as she physically recovered from life-threatening illness, she decided to volunteer at the downtown store. "I walked in, and I said I'm going to work here." She didn't mind that they weren't hiring at the time.

Soon enough, there was an opening at the Valley store, and Dusty came in to interview with Loire, the assistant manager.

Loire remembers how Dusty came in nervous and scared, but there was still something special about her. "I told her, 'You have the attributes to be a leader.' I told her that and she looked at me like, 'Are you talking to me?' " 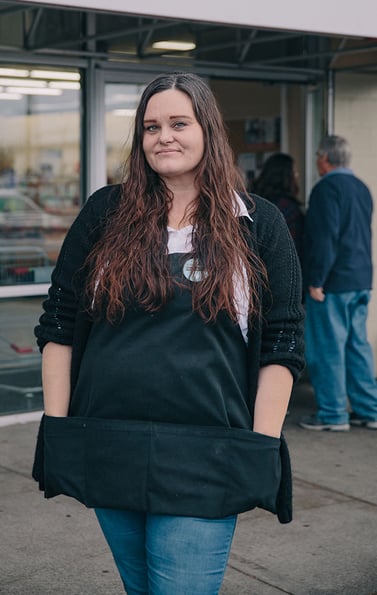 It didn't take long for Dusty to prove herself at the Valley store. Her work ethic and commitment were very strong, but she still hesitated to accept positions of trust and leadership, like having the keys to the store or the cash register. "We had to kind of force her into the fact that it's your job and if you can't do it, then you can't work here," Loire says.

With those little pushes from management, Dusty finally came into her own as the lead over production at the Valley store. Being useful, being trusted, and being part of an uplifting environment every single day have been a huge blessing in her ongoing recovery.

"I love this store. I guess to a certain extent, I feel like it's my way to give back. If somebody sees that I can change, I can have a productive, sober, God-dependent life, then maybe that will make an impact on their life. Maybe they'll make that first step on changing their life as well."

That has been the case with each person who has encountered Dusty, including people who work at the store to fulfill court-ordered community service. She always encourages people to take the next step toward recovery. And it's hugely fulfilling to see them do it.

"Just to have them in the environment, they will come to you later and say, 'Wow, you were so accepting. You guys were so nice.' Or, 'Your story impacted me. I'm now 10 days sober, 3 days sober, and I'm going to church.' Just the little things. You never feel like your story is going to make an impact on somebody else."

It isn't just workers who are impacted by Dusty at the Thrift Store: She loves it when she gets a chance to tell shoppers or donors firsthand the difference they're making by supporting UGM Thrift Stores, where proceeds fund free UGM services like the Crisis Shelter. "It's fulfilling to let the donors or the customers know what they're truly supporting: That you're paying for a meal, you're paying for 320 people to sleep tonight."

Old contacts from the drug scene or friends from the past sometimes come into the store. "I will run into people at the store and they'll be like, 'I didn't even recognize you.' And I say, 'I know, that's the point.'" 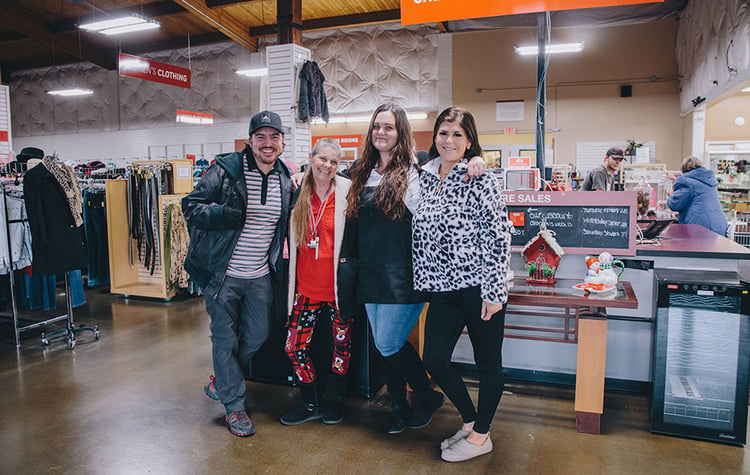 Dusty even saw her former boss from the school district shopping at the store. She asked forgiveness for what she had done in her addiction, and they reconciled.

But often, there’s no substitute for time when you’re rebuilding trust. Dusty knew her son and the rest of her family were right to doubt her word and her commitments at first. That makes it all the sweeter to have the relationships she has now, after five years clean and sober.

“To be able to call [my grandma] and not hear that doubt in her voice is just such a big deal. They believe the things I say. They know if I say it, I’m going to do my best to do it, get it done, and they can just trust me totally.”

Dusty is also thankful to have future growth to look forward to, as she continues in management training at the store: "They've helped me along the way to give me the tools I need to get me to that next step. ... Believing in myself, knowing that I have these gifts, and I can use them, it's safe to use them, and they're good tools and gifts and skills. Just the sheer encouragement is awesome. ... You're not that person anymore that you used to be."