Pain: physical suffering or discomfort caused by illness or injury.

No healthy person enjoys pain. Its whole purpose is to signal that something is wrong.Somewhere in the 1990s, however, the medical community in the United States started treating pain, not as a signal, but as the enemy itself. Pain became the “fifth vital sign,” added to body temperature, pulse rate, respiration rate and blood pressure. The argument went something like this: pain is a presenting symptom in 80% of doctor visits; more Americans suffer from chronic pain than cancer, heart disease and diabetes combined, and pain costs Americans more than $100 billion a year in health care services, compensation and legal action. (National Library of Medicine – the published article has since been retracted.)

One doctor described the medical community’s rising interest in pain like this: "I saw this all the time in my surgical training—that we did not treat pain, that we left people in terrible pain and suffering, and it was a kind of inhumanity that I thought was unacceptable. So I really keyed into the lessons from people like palliative care clinicians who said we have to measure pain, and we have to treat pain. But what we had not done was continue to measure what was happening along the way… Basically, I was like more is better, take some.

"We as a profession have caused an epidemic that is bigger than the HIV epidemic. We have more deaths from drug overdoses than occurred at the peak of the HIV/AIDS epidemic in 1995. That's how big this is. It's more deaths than in motor vehicle accidents. The cause in the opioid epidemic starts with getting a prescription of opioids from physicians." (Dr. Atul Gawande, public health researcher and endocrinologist at Brigham and Women’s Hospital in Boston on Vox podcast)

If you visited a doctor, urgent care or emergency room in the 90s, early 2000s or even recently, you may have been asked to rate your pain on a scale of 1 to 10 – another indicator of an increased focus on pain, and certainly this attention to pain isn’t all bad. Lots of people suffer from chronic pain and many may suffer unnecessarily, but what no one predicted was the end result of this increased focus on pain: an opioid epidemic.

What is an opioid? Opioids are a group of drugs that include synthetic opioids like fentanyl, illegal drugs like heroin and legal prescription pain relievers such as oxycodone (OxyContin), hydrocodone (Vicodin), codeine and morphine. Prescription opioid pain medications can be helpful when used correctly under the guidance of a healthcare provider, but misuse can lead to dependence and addiction. (Substance Abuse and Mental Health Services Administration)

Have you seen the billboard with this message in bold letters: “Our painkillers are killing us”?

Here are the facts:

(Statistics from National Institute on Drug Abuse and the Centers for Disease Control.)

It goes without saying that no one is monitoring the purity or quality of illegal drugs. Heroin is super expensive. Fentanyl is cheap. A kilo of heroin costs around $50,000, where as a kilo of fentanyl only costs $3,000, so drug dealers are inclined to cut heroin supplies with Fentanyl. Fentanyl is also 50x more potent than heroin, but most users have no idea their heroin has been cut with Fentanyl. You see the problem.

Is Pain the Enemy?

“In the end, my job is not to protect myself from pain.” – Corissa

To understand the power of those words you have to know the woman who said them and the depth of pain she experienced.

Corissa’s mom was an alcoholic and a drug addict. “I remember my mom being a fun, loud, outgoing woman, but I also remember her drunk and on drugs most of the time, and as I got older, up until third grade, she spent more and more time under the influence, and that changed who she was.” Nonetheless, Corissa loved her mom deeply and became her caretaker. If her mom was in a bad way, Corissa would stay home and take care of her. They went everywhere together—drug houses, AA meetings… Eventually, however, Corissa’s dad realized he had to take the children and move away. 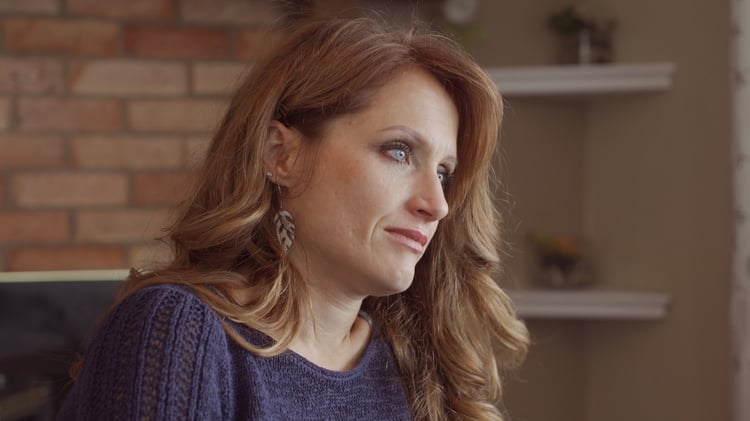 Corissa grew up without her mom until she was 13. By that time, her mom had some sobriety, and her dad thought Corissa needed her mother’s influence, so Corissa moved back in with her mom, and it was glorious. Finally, someone who understood what it meant to be a girl. They went shopping for all the cute fashions of the time. Her mom decorated her room in a girlie way. They did hair together and craft projects, danced around the house to oldies music.

Then, four or five months after Corissa moved in with her mom, her mom was diagnosed with stage four cancer. She went to the hospital and never came home. Corissa’s mom died two weeks later.

The pain was so overwhelming that Corissa resolved not to feel it. She remembers going to a football game that night and when someone asked her about her day, she said, “Oh, my mom died.”

She swore to herself: “I will not feel this.”

And that became her mantra for the next decade of her life. She remembers staring up at the ceiling in her bedroom and saying to herself, “This is what happens when you hope or when you really want something. I will NEVER let anybody—God or a person—surprise me again. That means you’re giving control to somebody else to hurt or to disappoint or to bring heartache or trauma. That’s silly.”

The problem was, God made Corissa as a very social, relational person.

“How do you make a decision not to care about people? Especially, I thrive on relationships. So to take my identity of actually how God made me and say, nope, that’s cut off… I was in conflict internally all the time because I knew my tendency was to be a certain way, but because of the trauma and pain, I was suppressing it… How do you not medicate that chaos?”

Corissa described her ability not to feel as her “superpower.”

“What makes me so strong is that nobody can hurt me.” But years of that approach left her exhausted. “I realized I was battered or beaten. Life had beaten me. I felt it. It was evident.”

And that’s when God called her to church. “As the congregation was singing, I cried. Just sobbing.” The dam was broken. “It was scary but also life giving.”

Corissa describes Jesus coming to her in the most gentle way, without condemnation.

“The God that I had cursed…to have Him so kindly that day in the church, walk back in and reveal Himself…He wasn’t mad. He was not mad at me. That part was like, wait a minute, I did all of these things. I said all of these things. I have not been the best person. And, in that moment, God was like, don’t worry about that. That’s for another day. I’ve been waiting for you.”

“The God that I had cursed…to have Him so kindly that day in the church, walk back in and reveal Himself…He wasn’t mad. He was not mad at me.”

Corissa came to UGM back in 2006 to learn more about walking with Jesus day by day and living life in a whole new way, and today, she recognizes with radical clarity that life with Jesus doesn’t mean a life without pain. She is married to a pastor and has five children. Her husband suffers from rheumatoid arthritis; pain is very much a part of their daily lives.

She doesn’t always know the “why” for the pain: “To rest in God’s goodness means I don’t need to make sense of all that. I get to trust Him. He is painting a masterpiece with my life.” 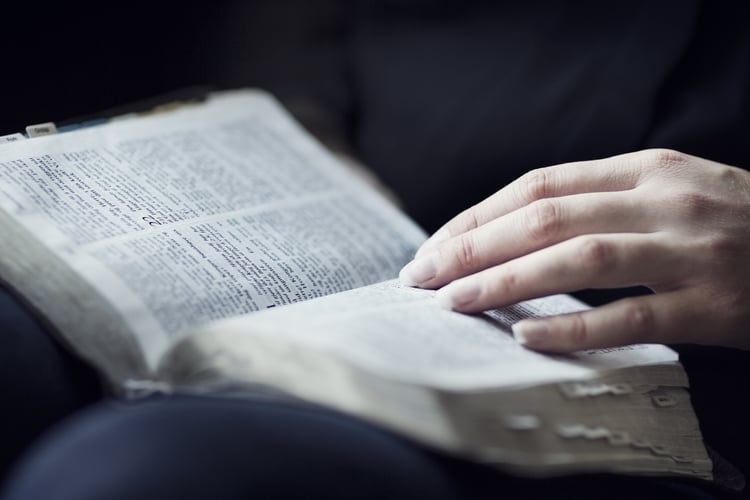 “We can ignore even pleasure. But pain insists upon being attended to. God whispers to us in our pleasures, speaks in our conscience, but shouts in our pains: it is his megaphone to rouse a deaf world.” ― C.S. Lewis, The Problem of Pain

Pain certainly gets our attention.

And, in the end, it is inevitable. We cannot escape it.

For some, pain makes them question the existence of God or, at least, His goodness. Author and pastor Timothy Keller, wrestles with the problem of pain in his book, Walking with God through Pain and Suffering.

He writes of just starting out in ministry with his wife: “The hubris of youth does not imagine pain and suffering. Little did we un­derstand how crucial it would be to help people understand and face affliction, and to face it well ourselves.

“As I took up life as a minister, I tried to understand why so many people resisted and rejected God. I soon realized that perhaps the main reason was affliction and suffering. How could a good God, a just God, a loving God, allow such misery, depravity, pain, and anguish?

“At the same time, I learned that just as many people find God through affliction and suffering. They find that adversity moves them toward God rather than away. Troubled times awaken them out of their haunted sleep of spiritual self-­sufficiency into a serious search for the divine.

“Over the years, I also came to realize that adversity did not merely lead people to believe in God’s existence. It pulled those who already believed into a deeper experience of God’s reality, love, and grace. One of the main ways we move from abstract knowledge about God to a personal encounter with him as a living reality is through the furnace of affliction.”

One of the main ways we move from abstract knowledge about God to a personal encounter with him as a living reality is through the furnace of affliction.” Timothy Keller

Perhaps we should not try to characterize pain as either good or bad. It does seem to be a result of the fall, and I’m pretty sure it won’t exist in heaven. But trying to avoid it at all costs is dangerous.

There is a point at which we must accept it as reality and sit with it—in our own lives and in the lives of others. Most of us are not called to “fix” other people’s lives, to make their pain go away, but we are called to mourn with them, to stay with them, and in that way, to help bear their burden.

Recovery: We are all broken.
The End of Striving: How the Gospel Brings Rest to the Weary
Labels and Life Change: A Business Partner Feature
Young Fatherhood, Pain and Recovery: Eric’s Story