Strangely enough, Gary Leonard’s commitment to volunteering at UGM started with a pillow.

UGM had put out a newsletter call for pillows. Gary saw it, went out and bought a new pillow and came to UGM to drop it off. Just as he entered the administrative offices, he ran into Phil Altmeyer, an old friend.

“Gary, what are you doing here?” Phil asked.

Gary laughed. “Well, I have this pillow and I’m looking for a place to sleep.”

“But, seriously, what are you doing here?”

Phil accompanied Gary into the building, where he ran into more old friends and ended up taking a tour of the expanded facilities. One thing led to another and Gary connected with Barbara Comito, UGM Marketing Director, and James Bishop, UGM’s multimedia producer. What a pleasant surprise to learn that Gary had 40 years of experience in radio, had recently retired and was looking to invest his time and talent in meaningful ministry.

When I met Gary, I was reminded of the ever-likable Mr. Rogers. It wasn’t his sweater vest (because everyone knows Fred Rogers wore a cardigan). It was his warm, friendly smile, gentle demeanor and honey-textured voice.

Gary and I chatted extensively about his background in radio. His love for the air waves dates all the way back to his childhood and his visits to the radio station in Colorado Springs where his uncle was Chief Engineer. In high school, he worked for the school radio station and a local commercial station, where he edited audio tape using a razor blade and marking pencil. He graduated from Colorado State College with a degree in vocal and choral music and teaching credentials but discovered that teaching music was not for him.

Providentially, he met Gene Pendleton, then chief editor at World Wide Pictures (the film arm of Billy Graham Evangelistic Association), at a Bible institute put on by Campus Crusade, and because Gary had some experience in film editing, Gene hired him as his assistant. Gary moved to Hollywood and worked for World Wide Pictures until he was drafted into the Army where he served as a Chaplain’s Assistant, and on his day off, you guessed it, he worked at the local radio station, reading the news.

After the Army, Gary went to work for Moody Radio, where he stayed for the next 37 years. Moody is also where he met his wife, Zeda, who worked for Moody Magazine at the time. Gary and Zeda were married for almost 40 years. When she passed away two and a half years ago, Gary’s life was turned upside down. Besides the grief of losing his life partner, the landscape in front of him was radically altered, and it took some time to adjust to that. Today, he sees “new territory/new vistas” opening up before him.

Gary also does audio editing for his church and uploads messages to the internet.

Gary probably didn’t imagine that dropping off a pillow at UGM would lead to two years of editing audio and video in UGM’s marketing department.

Gary is what UGM calls a “high-impact volunteer.” His vast experience in radio editing has been a gift to the Mission. He assists James Bishop in editing Phil’s radio spots for KMBI Moody Radio on a monthly basis and edits video testimonies, as well. 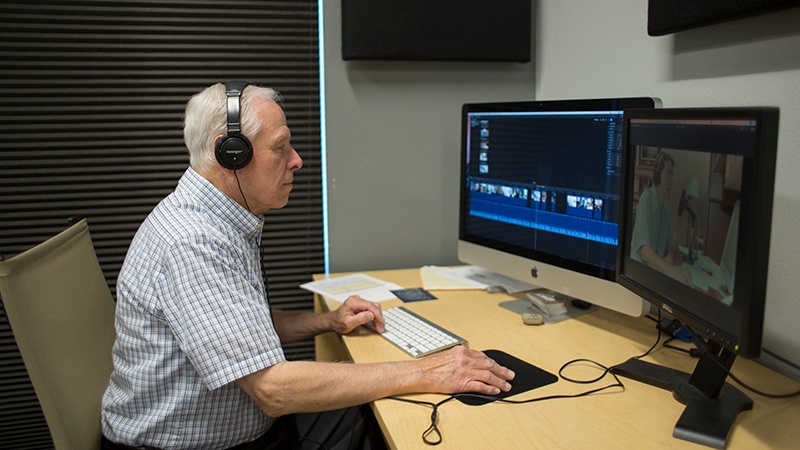 “Gary is amazing,” James says. “He helps me with a variety of things, especially radio, and when I get super busy, Gary helps me stay on schedule. I’m extremely grateful for Gary.”

The old saying, “You can’t teach an old dog new tricks,” does NOT apply to Gary. First off, we would never call Gary “an old dog.” Secondly, he’s learned all kinds of new tricks.

“Let me put it this way,” Gary said. “I had some knowledge. Of course, I’ve edited most of my broadcasting life, even long before I got to KMBI…So I knew the principles and I knew the tricks…but I’m not a Mac guy. At home, I have a PC, so I had to learn Mac.

“Secondly, I have an audio editing program at home, but it isn’t the program we have at UGM, so I had to learn that.

“Thirdly, as I got into video editing after some time of just audio, I found out there was a whole lot more to learn on the video side; so it was quite a challenge.”

But Gary rose to the challenge, and we’re so glad he did. 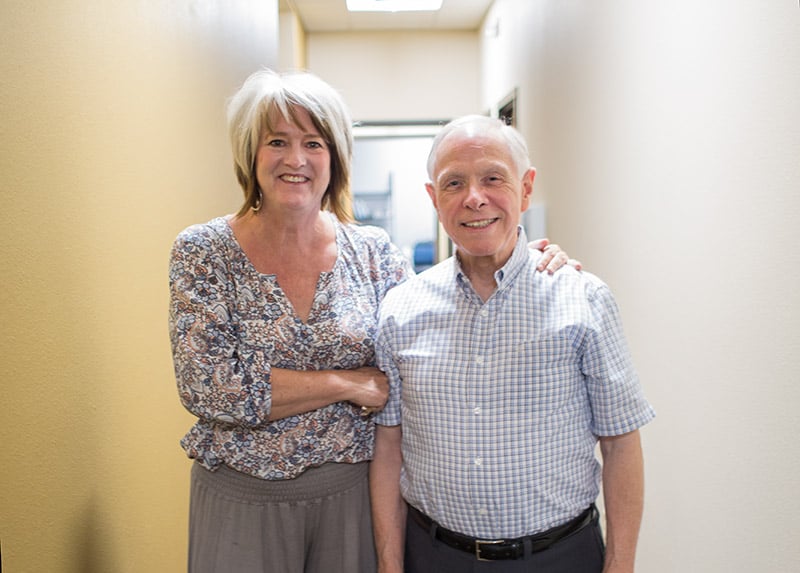 Gary has certainly been a blessing to us. Between this year’s Annual Gathering and Commencement Celebration, Gary put in more than 80 hours of volunteer time. We're not sure what we would do without him, but according to Gary, he is being blessed at the same time.

“James is an excellent, patient and very knowledgeable teacher…He’s taught me the little things, the big things, and just been really patient.

“I have been able to sense God at work in the individual lives of the people whose testimonies I’ve worked on. And I tell you, they bring you to tears…the excitement of seeing how God can change a life never gets tiring.

“Almost every story begins with chaos and misery, and many stories end with joy as the person surrenders his/her life to Jesus Christ.

“One story stands out as I sort through the images and testimonies in my mind.  A young mother and her child were living in a difficult situation. She was caught up in a lifestyle that was destructive, and both were in need of a place to live. She was directed to Union Gospel Mission and, today, is living a productive and much healthier life. She is able to nurture her child, both in just living day-to-day, and in growing in a relationship with Jesus.  Her countenance changed dramatically, and she was able to testify to a personal understanding of God's grace and new life in Christ!”

Gary was looking for meaningful ministry…and, unbeknownst to us, we were looking for Gary.

So thankful for that pillow that brought us together.

You don't need to be a radio pro to help hurting people at UGM. We need volunteers with just about every skill set imaginable!