When You Can't Undo What You've Done

Ron James’ story is one of those unbelievable, too-good-to-be-true tales of a bad man turned good.

When he was 31, he murdered his ex-girlfriend and was sentenced to life in prison.

“You have taken the life of a human being, unjustly; it’s a horrible, horrible feeling, and you want to undo it, but you can’t. It’s done…it’s something you live with.”

In prison, Ron wrestled with ending his own life. “I said, ‘Ya know, I deserve this prison sentence, but there’s no way I want to spend the rest of my life in prison.’ So, I got on my hands and knees and said, ‘Lord, if you’re real, show me. If you’re not, I’m checking out.’”

After his first year in prison, Ron was transferred to a different penitentiary. He didn’t realize the move was an answer to his prayer. But when he arrived, Ron says he met “a tsunami of blessings. I mean, [God] spoke loudly…He made Himself real to me.”

Within months of arriving, Ron gave His life to Christ.

“It was like I had been carrying this albatross around my neck. And once I surrendered my life…It’s hard to explain. It was just a relief. I felt lighter, I felt free. Even though I was in prison, I felt a freedom.

“I mean, the price of what I did to my ex-girlfriend was still there…it never goes away…but I felt He had taken on the burden for me. It was like Christ said, ‘That’s why I went to the cross for you…I forgive you. What you did was horrible and you’ve got to be in prison for it, but I love you, in spite of that.’”

And after receiving God’s forgiveness, Ron felt the Holy Spirit asking him to reach out to his ex-girlfriend’s family.

“I wrote a letter to them, asking their forgiveness. They responded saying, ‘We forgive you. What you did was horrible.’ They said, ‘Obviously, we feel hurt and we miss our daughter, but Christ forgave us of our sins, and we’re forgiving you, Ron.’

God, in His goodness, continued granting Ron favor in prison. He met his wife, Colette, as a volunteer offering counseling to some of the inmates, including him.

“I’d told this woman I’d killed my ex-girlfriend, I’m in prison for life, and she just said, ‘Yes, horrible crime. You should be in prison, but I’m looking at the brand new, born again man.’ She saw beyond.”

Through counseling the two became friends. “We kept proper boundaries. She spent three years at the prison and we built a friendship. We knew each other four years. After four years, we got married.”

“The cross is profound. The blood of Christ covers all crimes, all sin."

Fast forward 30 years, after his sentence and still married, Ron had changed, and people noticed.

It’s been over a year now, since Ron became free, but he expresses, “In prison you dream about being free a lot. You wake up and think it seemed so vivid, but there are the bars. I still feel like I’m dreaming. It’s been [a year] and I think I’m gonna wake up and be back in prison. I still wake up thinking I’m in my jail cell.”

But instead of a cell, Ron has freedom, a home with his wife, and the opportunity to encourage others with his story.

“The cross is profound. The blood of Christ covers all crimes, all sin. And I think I’m a good example of that.”

Ron is able to share his story as an Associate Staff member (or full-time volunteer) at UGM. Working as the back dock supervisor taking in donations gives him a perfect platform for giving hope to other men at the Mission who are working alongside him. 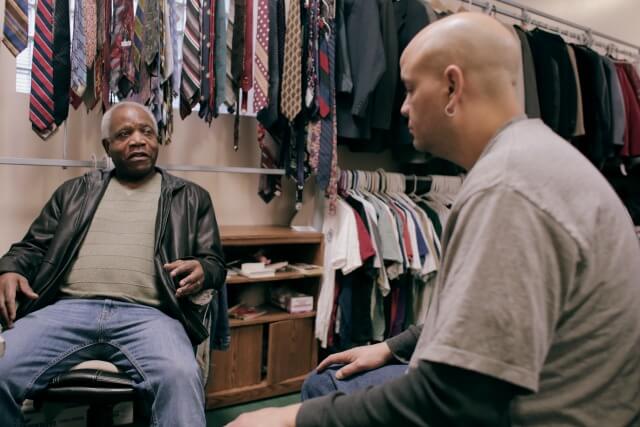 Ron offers biblical examples, as well, like David, Paul, and Moses who God used despite their sins and shortcomings.

He explains, “I’m still a work in progress like we all are – we are all works in progress. There’s spiritual warfare going on, there’s a tug of war. Even though we’re born again, the old nature is still there, it doesn’t go away. You have to keep it in check.”

Still, Ron says, “I want to be able to say, God worked in this sinner’s life…if he forgave me, he can forgive you too. I think I’m evidence that God exists and His son died for us. I think I’m proof. I mean, how could you make this up?

“God’s love saved me, He’s blessing me, a convict; that’s awesome! Think about that. That’s how deep His love is!”

And at UGM, Ron is making a definite impact, sharing God’s love and forgiveness each day with those coming through our doors.

Update: Ron volunteered at UGM for more than a year but needed to move on to find full-time work. He was a blessing to the men while he was here. Are you interested in impacting lives through volunteering?

Forgiving Yourself as Part of Recovery
Lose the Label: Ashamed