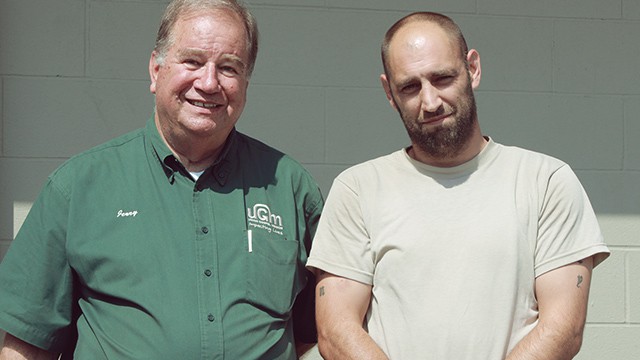 Jerry Coatney was literally ecstatic when he got an email from Greg Barclay saying that UGM was looking for a driver. Jerry had wanted to volunteer for some time, but he has trouble with his feet and needed a job that wouldn’t require a lot of standing. “I couldn’t think of anything but data input, and I did not want to be stuck behind a computer all day long.”

Jerry responded to Greg’s email almost immediately. “I said, ‘That’s it. I’m it. I’m your guy.’” And, for over a year, Jerry has been “our guy,” picking up marked-out items from 16 Starbucks locations all over town. Jerry volunteers about three hours per day three days a week – providing a huge cost savings to the Mission – not to mention that his professional demeanor makes him a great ambassador for UGM.

It didn’t take Jerry long, however, to figure out that serving as a driver and picking up pastries wasn’t his real job. Jerry always has a man from the shelter riding along as an assistant. “My job is talking to these guys, making friends with them, maybe counseling them a little here and there…just letting them see how a Christian does business.

“The guys that ride with me become my friends. They see me here at the Mission, and they come up and ask me questions. I’m a source of support for them.”

The past year has changed him, Jerry said. For starters, “I’m very much more bold in talking to people about Jesus.” He’s walking more and feeling better physically, as well.

“When it’s God’s plan, you get surprised along the way. This has been full of surprises. I thought I was coming to drive a van, and it has turned into so much more. Driving the van is really ancillary to what I do.”