Laurie Johnson, “L.J.,” as she’s called at the UGM Thrift Store, is as dedicated a volunteer as they come. Over the years, she has volunteered with a local food bank and with organizations that serve the elderly. She chose to partner with UGM as a volunteer because she believes in the work being done here.

“I believe in the ministry of UGM and wanted to be a part of helping people to become whole, redeemed in Christ, and contributing members of society. UGM does such a fabulous job of that and that was an organization I really wanted to support.” 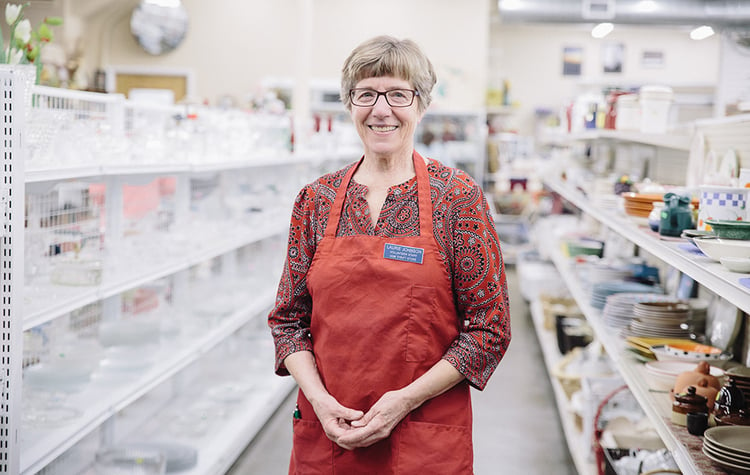 Laurie has volunteered in the housewares department at the UGM Thrift Store in Spokane Valley since 2014. She sorts and prices donated items, cleans and displays merchandise, and teaches other employees who may not have been in the workforce for many years. Like anyone who has worked in retail, L.J. says it's a challenge to keep the merchandise on the shelves organized and appealing to buyers.

“I don't know if you can imagine that or not— it really is a challenge. People take what they're carrying and they set it down wherever they want. And then of course you know, making eye appeal is really important to me too. I like to think that has helped with our sales numbers, but I do hear comments quite often how nice the store looks. Of course, that's a blessing to me to hear when shoppers are pleased with being here.”

Until just over a year ago, L.J. volunteered part-time, but when the department lead resigned at the UGM Thrift Store, L.J. offered to fill the gap in staff temporarily and has since chosen to volunteer full-time in housewares for the store. It's no wonder she was honored with the Albert Arend Award last fall for her commitment and dedication.

A forty-hours-per-week volunteer commitment is incredibly generous by any standard. We couldn't help but ask, why is she so willing to help? L.J. says she gets that comment a lot. She says she gives her time because she believes it adds up to a much bigger picture than just sorting mismatched tea sets and vintage glassware.

“By the grace of God, I have been able to fill this need. It's as much a blessing for me as it is for what I'm able to do for the store. And I love what I do here and I love the people I work with. It's just really a great place to be.”

At the beginning of our interview, L.J. explained her motivation to give so generously of her time is grounded in the belief that she has been blessed throughout her life. She learned early on how to work hard, had financial blessings, and was able to work throughout her life to be successful. Now, she wants to be a good example to people who are reentering the workforce and support an organization that is about rebuilding lives through change and relationship.

L.J. has worked hard all her life. When she was three years old, her parents purchased a 36-acre resort in the 1950's. She learned by the time she was in grade school that to be part of a family business meant there were constant chores and upkeep to be done to keep it going.

“Somebody would always have to be home to take admission money. We rented boats, we had a concession stand where we made hamburgers, hot dogs, ice cream, pop, candy—every day really, but, mostly after big weekends, because large organizations would rent the whole park or sections of the park to have their company picnics… Every summer, kids at school who didn't really know me would always be so jealous that I lived on a resort. I mean, how much fun could that be, right? Well not so much— we had cabins, and we had restrooms and changing rooms. Everything needed cleaning all the time, and my father was such a stickler that if there was a match stick or a watermelon seed on the ground and we missed it, he'd point it out and we'd have to go back and pick it up.”

The commitment to UGM has been a learning experience and a blessing for L.J. She admits fully that while she’s great at getting things done, she has had to learn more about walking alongside people who are learning new skills. “Well, a lot of teaching is involved.... I'm not gifted in that area…But as these relationships develop, we learn how to work together. And I think that is good for all of us really, you know? I'm not too old to learn how to do new things or maybe do something in a different way. So we're learning together here.”

Over time, L.J. sees the employees who are training with UGM Thrift Store begin to rebuild skills and self-confidence. At UGM, staff often talk about the value of a safe and healing environment. L.J. sees the fruits of that value in a number of different ways.

A key ingredient that shapes the learning environment at UGM Thrift Store is a culture based on Christ-centered values. Valley Store Manager Bob LeCouix has worked to engage his staff with these principals on a deeper level.

“He holds what he calls 'huddles.' We've been reading from My Utmost for His Highest [by Oswald Chambers]. We don't do it every day but pretty regularly throughout the week and we pray for each other. He's like a pastor and a teacher. We read it and then he talks about how it affects us in our relationships at the store, and in our lives, and encourages us in our Christian walk. I personally feel that it's one of the reasons that the store is thriving -- and we've been doing it with being short-staffed. It's been pretty amazing in that regard. It just touches my heart to see that happening for all of us because I need it as much as everybody else here.

“A lot of these people, I don't think, have really held a job before, you know? And they come in, they're nervous and a little bit scared about what they do. Often I hear them ask if they're doing it right. They have such a desire to do well, and as they come on board and learn, they grow, and you can see it… We talk about being a family, and sometimes we do get upset with each other, and it's okay. And so have the discussion you know, and pray about it.”

So often when Christians and non-Christians alike think about generosity, we think in terms of finances, but we can be generous with our time, expertise, treasure and friendship too.

Luke 6:38 says, "give, and it will be given to you. Good measure pressed down, shaken together, running over, will be put into your lap. For with the measure you use, it will be measured back to you."

When we give, we  catch blessings along the way. A spirit of generosity fuels much of what happens  at UGM. We would not be the same without volunteer support or the donations we receive.

We could put a dollar value on Laurie's volunteer hours - and it would be a BIG amount - but it would not accurately convey the whole picture. Laurie's giving something irreplaceable - herself.

Ministry in a Thrift Store
Dusty's Second Chance
A Brief History of UGM, Part 2: 1987 to Present
7 Reasons to Donate-Shop-Save at UGM Thrift Stores