Stephanie sums up her childhood in just a few phrases: “A lot of broken promises, fighting, a lot of neglect, never being told I love you. No affection or encouragement from either parent. No stability. No structure. No safety. I was on my own.”

Stephanie’s parents were both addicts. Her mom hoped Stephanie’s birth father would marry her when she got pregnant, but he didn’t. “When my dad didn’t want to be with her anymore, she hated me for it. She was trying to save the relationship and it backfired, so she held that against me.

“My mom was drunk all the time. When I came home from school, she didn’t help me with my homework. She was in her bedroom, drunk on peppermint schnapps.

“My dad was in and out of my life when it was convenient for him… He would come see me every three months and take me to a theme park or something and then disappear for another three months.”

Somehow, Stephanie still managed to do well in school, “and I was awesome at basketball. I think I could have gone far if I had someone supporting me.” 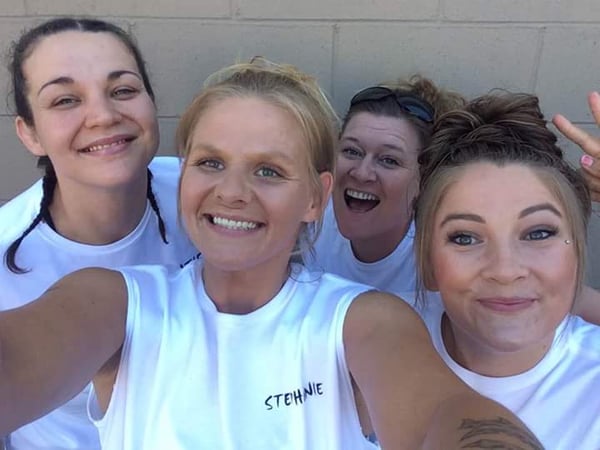 Stephanie and a few friends from the Center for Women and Children competed in Hoopfest together in 2017.

Stephanie stayed at friends’ houses as much as she could to avoid the constant partying and drinking at her own. “I would throw fits when I smelled pot being smoked in our house. I was just a real damper on her party.”

One weekend when Stephanie was 12, she came home from a friend’s house to an empty apartment.

Her mom “had left and moved to Texas with her 20-year-old boyfriend and my brother. She left me a note saying there was no room in the car for me.”

Let the weight of that last paragraph sit with you for a moment. Stephanie was literally left behind. She was unequivocally rejected.

Abandonment by a significant person leads to a sense of loss of love and connectedness. In early life, being cared for, being important to others and being wanted is critical. When rejection or abuse occurs, the message to the person is that they are not important and that they have no value. In children, this loss of psychological and physical protection leads to internalized chronic fear and shame. Imagine, if you will, growing up and living your life with the belief that you are not wanted and that you are worthless. How do you go on in life with these beliefs?

Researcher David Carson suggests that “the short- and long-term effects of abandonment of the child…may be more crippling and difficult to reverse than those resulting from physical battering or emotional neglect.” In cases of abuse and neglect, there may be some moments of love and affection, but with abandonment, the rejection is absolute.

Stephanie managed to stay in school until ninth grade – staying with friends and relatives, some of whom were addicts. “I started smoking pot, dropped out of school, and by the time I was 17, I was a full-blown meth addict.”

Not surprisingly, Stephanie entered into multiple destructive relationships. Her own father suggested meth as a way to lose weight after the birth of her first child.

Stephanie believed the lie that her mother communicated: You are not wanted. With that core belief, she swung back and forth between trying to find someone who did want her and numbing herself from the pain of self-loathing.

Why would anyone love me?

Fast forward 15 years. Stephanie was sitting in jail. She had lost custody of her children, and she thought, “This is it. Life will never be anything more than suffering and misery.

“I didn’t know it at the time, but that was a lie. I believed a whole host of lies: that I was alone, that no one loved me, that I was nothing. If my own mother abandoned me, why would anyone else ever love me?”

While she was in jail, Stephanie met Chaplain Green, the man who introduced her to Jesus Christ. “He was the first person to believe in me. You can’t imagine how big of a difference that made. I began to see glimmers of hope.”

When Stephanie left jail, she came to UGM, and the healing continued. “People accepted me and liked me in spite of my past. And that love and acceptance began to change me. A new Stephanie was emerging.”

The healing really took hold for Stephanie when she forgave her mom. She recognized that she had done many of the same things to her own children that her mother had done to her.

Today, Stephanie is drug-free. She has a job, her own place and two of her children living with her.

“I am definitely still facing challenges. Being a single mom isn’t easy. I’m working. I was trying to go to school, but recently my son came to live with me and he has significant needs that I am trying to address. Some days, I feel completely overwhelmed. My mentor, Chaplain Green, died just a few months ago, and I really miss him.”

Still, she has experienced God as someone she can trust.

“Every day, I lie on my couch and look around at my life. I can’t believe it. I have my own place. I am surrounded by people who love me. I know God is faithful. I am combatting the old lies with the truth.”

Stephanie found the safety and acceptance she needed at the Center for Women and Children. You can help other women and their children find freedom and healthy living by giving to the Center. $250 provides a week of food, shelter, and holistic recovery services for someone like Stephanie.