During my first couple of weeks as the Staff Writer at Union Gospel Mission, I was tasked with helping interview seven volunteer case managers who work with guests at our Men’s Shelter on E. Trent. Before coming to UGM, I was a journalist on local radio where sometimes I wrote about homelessness. Before that, I myself, was a case manager working with families from different countries who were resettling in the U.S. Though I was somewhat nervous about interviewing seven case managers at one time, I went through my normal preparation checklist: I wrote down questions, researched, thought about talking points—I figured I knew what to expect.

I asked a basic question to begin, then I landed on what I thought would be a helpful question to bring a reader into the experience of working with men who are homeless: “What does a typical experience look like when you first meet someone? What are some of the things the men are going through when they come to UGM?”

As soon as I ended my sentence, the feeling in the room changed. There was a collective breath from my interviewees, then, the kind of laugh that comes from wisdom and experience at the expense of the naive. It rippled through each of them and then I waited for their response.

Roy, who has been a volunteer case manager for five years with UGM and ten years prior at another nonprofit doing similar volunteer work gently explained: “There is no typical experience. The rest echoed the sentiment with smiles and a nodding of heads…I don’t think I’ve ever heard two stories that are the same.”

If you’re reading this blog, more than likely, you are someone who cares about people and about homelessness. I am not doubting anyone’s compassion or engagement, but in that moment, it was a good reminder to me of the difference between knowing something because I’ve scrutinized a situation and knowing something because I've walked alongside people in the midst of that situation.

These guys know their stuff and who they are ministering to. Between the ages of 54 and 75, these volunteers have their own stories of life’s ups and downs and offer a caring, patient presence as they listen to guests who come to the Men’s Shelter. Building trust, listening, and encouraging them is key to helping men restore their dignity and begin the kinds of changes that will help them rebuild their lives.

According to Dan McLellan, the UGM Guest Services Manager, Union Gospel Mission’s case management services may have one of the most robust programs for a temporary shelter within in the Citygate Network (previously, Association of Gospel Rescue Missions). Case managers Joel, Dennis, Howard, Roy, DuWayne, Dana, and Greg each have between three to five years of experience serving at the Mission.

Dan says their team is grounded in philosophy articulated by Warren Wiersbe, who said, “Ministry happens when divine resources meet human needs through loving channels to the glory of God.”

“We try to be channels. There is a lot of human need, and there’s a lot of divine resources… “ Staying at the Men’s Shelter is an entry point for UGM's Life Recovery and Employment Readiness Programs. Men receive the resources they need to begin a pathway out of homelessness.

The team does what they call broker case-management. Three meals a day and a place to sleep are a crucial part of the process, but soon after guests arrive, they are assigned a case manager to help them connect to resources and other service providers, like Frontier Behavior Health, Aging and Long-term Care Services, the Department of Health and Social Services, and more.

“These guys have a lot of work autonomy. They’ve got longevity, training—these guys really do some fantastic work. They plug-in and have some decision-making freedom and make a huge impact because they are doing real work.”

While the reasons for a person's homelessness are individual, and no story is the same, there are a few commonalities to men's stories. Some are battling addiction or mental health concerns. Sometimes circumstances happened outside of their control, like the loss of a loved one, medical bills or loss of a job.

Roy: “I had one fella where he lost his job, then his wife died of cancer, then he lost his apartment. I mean, this is a fella that doesn’t have any addictions or anything. This guy, he lost everything, so his needs are different.”

How do they minister to men who have been through so much?

Greg, who has been a case manager for two years, notes the importance of presence. “I think it’s very important to understand, that the primary focus we have, is to listen. We will listen to these men when most of the people that they have in their lives up to this point won’t listen. So we listen and offer positive encouragement…We give them an effective shoulder to cry on, to have someone hear them out, show compassion, and then, provide them with encouragement in whatever course of action they choose to pursue.”

The seven case managers, (some of them depicted in the photo below), need to know basic information in order to provide direction. They conduct an intake interview that helps them understand the scope of need an individual may have. The first portion asks about basic health and shelter needs - if they have a job, any addictions, or other issues they want to share. The second portion involves their spiritual path. Howard, who has been with the team for three years, says he likes to save this for last. “We don’t want to forget the spiritual side—the spiritual dimension. We always think physically…but, God has a plan for these guys. And it’s important to try to direct them in God’s direction, you know?” 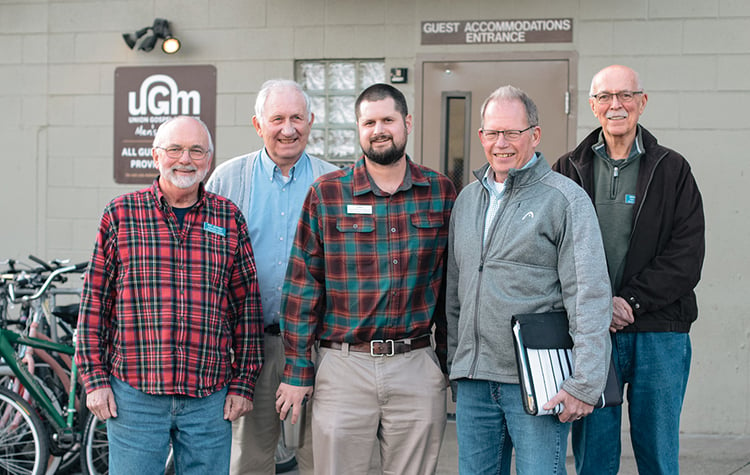 Though the guests are able to stay up to 90 days, not everyone chooses to stay that long, or he might leave because he is not willing to follow the house rules of sobriety, chapel, regular chores and non-violence. Sometimes guests miss their meetings with their case managers altogether. Still, the case management team wants to use any time they have with these men to make an impact.

Howard: “I have been able to lead one guy through the prayer of salvation… but then again, you don’t know - if they move out, you don’t know what’s going on with them unless you have some follow up. We have books that will follow up that I give out to them. You know, even if you can plant seeds. It all helps.”

A quality that makes the team so passionate and effective at what they do, may just be their humility. There is a phrase they said more than once during the interview when they spoke about what they have learned from their experiences, and why they keep coming back to serve the men who come through the East door on Trent.

“There, but for the grace of God, go I-” or, in more modern English, if not for God’s mercy and grace, it could have been me. (The older phrase is usually credited to John Bradford, the pastor, teacher and martyr who lived from 1510-1555.)

When I asked what each of them had learned throughout his experience, Dennis said, “A couple more bad decisions my part and I could be on the other side of the desk…so, we’re not all that far away from needing the help that the Mission has to offer.” 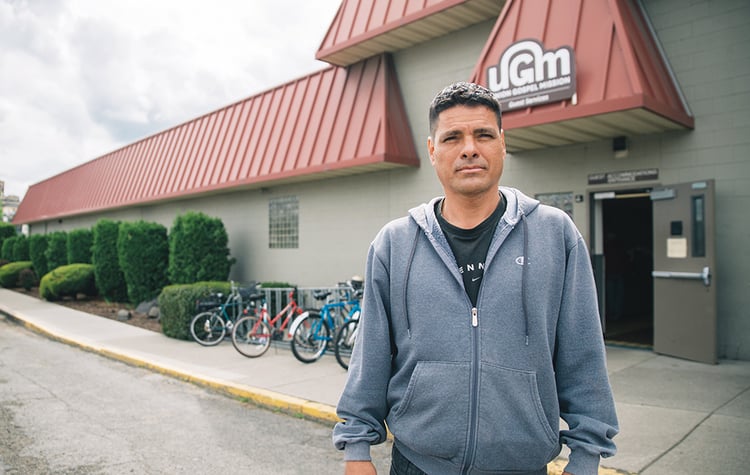 Howard says that at first, he wasn't even sure he’d be able to talk to the men he now ministers to. “I didn’t think I’d ever be able to talk to these guys. When I would see a homeless guy on the street and he has his hand out for money, all you see is the way he’s dressed. And, one of the first things I noticed after being here is that, when you look a guy in the eye, you see something different than his outside appearance. That affected me a lot right at the beginning because I could see— this is a person that God has created who has a need, and what a joy that is to be able to help him in whatever that need is. So that has been a blessing—to see the heart of the men, instead of the outside appearance.”

Each of them also said they got a lot of benefit out of serving men at the Mission. Dennis, who has been a case manager for five years, said he can’t be cynical. “By nature…I’m a cynical person. I find that I get a lot of benefits here because I can’t be cynical. I have to be honest. If you sit with the idea that the person you’re dealing with is no good—well—then you’re not disappointed, and they’re not good. But, I pray every day that God will allow me to open up to them, and not be so judgmental as I am in my personal life.”

Those who are actively spending time with people existing on the margins see things differently. They see the Imago Dei, the image of God that is in all of us, in the least likely people. In 1 Samuel 16:7, the Lord reminds Samuel that whether powerful or poor, the Lord doesn’t see people the way we do, “For the Lord sees not as man sees: man looks on the outward appearance, but the Lord looks on the heart.”

Jesus tells us later in Matthew 25:40 “Truly I tell you, whatever you did for one of the least of these brothers and sisters of mine, you did for me.”

Though I had to grapple with my own lack of understanding I am so glad I asked, “What is the typical story of someone who is homeless?”

I got my answer— there is no typical story, but we are called to love the least of these, and all need to be shown the love of Christ.