You might be asking: Why is UGM making such a big deal of World Homeless Day? How does a day devoted to homelessness really help anything?

Actually, I hope you are asking those questions because they show you’re already paying attention, and that’s Step 1 in making a difference.

When I first applied for a job at Union Gospel Mission, I was not paying attention. I was wrapped up in my suburban life, raising my kids, serving at church – all good things – and I had not given much more than a passing thought to homelessness.

My answer, however, turned out to be the right one because it both got me the job (yay!) and changed my life (double yay!) I said UGM needed someone to tell the story of individuals – not a homogenous group called “the homeless.” And I’m a storyteller. That’s what I do.

World Homeless Day is a gimmick, really – a means for UGM to issue a call to the larger community: Stop. Take notice. See these people as people. Do one thing to help today.

Toward that end, I walked into the common area at the UGM Men’s Shelter and asked a handful of men to tell me their stories: How did they end up here? What was homelessness like for them? And why should anybody care?

It is when we see the individual, the person, the human, that we begin to care. At least, that’s how it worked for me. 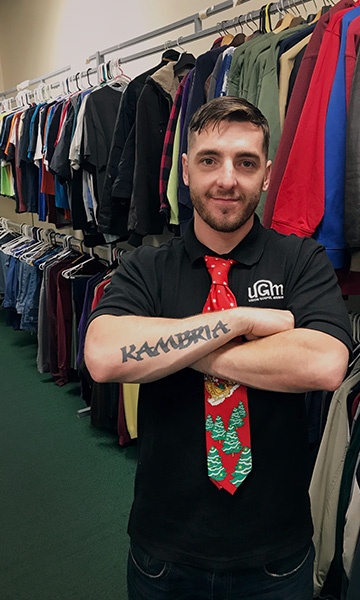 Before coming to UGM, Adam had been homeless for three years. He interacted with other homeless people living in the woods but knew instinctively that it wasn’t safe to live with them, so he sought shelter in town – doorways, bushes. “Underneath their addiction, they can be some of the most awesome, genuine people. Nice, caring, understanding people. But addicts have a shelf life, and then they go into selfish, survival mode.” Adam decided it was safest to be “a lone wolf.”

Adam’s own drug addiction was fueled, he said, “by my inability to be a responsible person, a good father.”

But the lifestyle also held certain appeal. “It was exciting.” Until it wasn’t. “The physical repercussions began to overshadow the excitement.”

Adam was in and out of jail and treatment programs, but he knew he needed something more. He wanted to be a good father to his daughter, Kambria, so he came to UGM. He is in phase 1 of the Men’s Recovery Program.

Here’s Adam’s answer to why people should care about homeless people: “They’re people, too, and  people who are often in the position they are because of no sense of belonging anywhere else.”

Alfred is a charmer. His gentlemanly demeanor, his southern twang and his “Yes, ma’am”s will win you over almost immediately. One look and you’re convinced he speaks the truth when he describes a life of hard work – driving truck, working construction. “I was a workaholic.” Then he had a stroke, fell and hit a table that snapped his neck. Today, he’s partially paralyzed and walks with a limp. 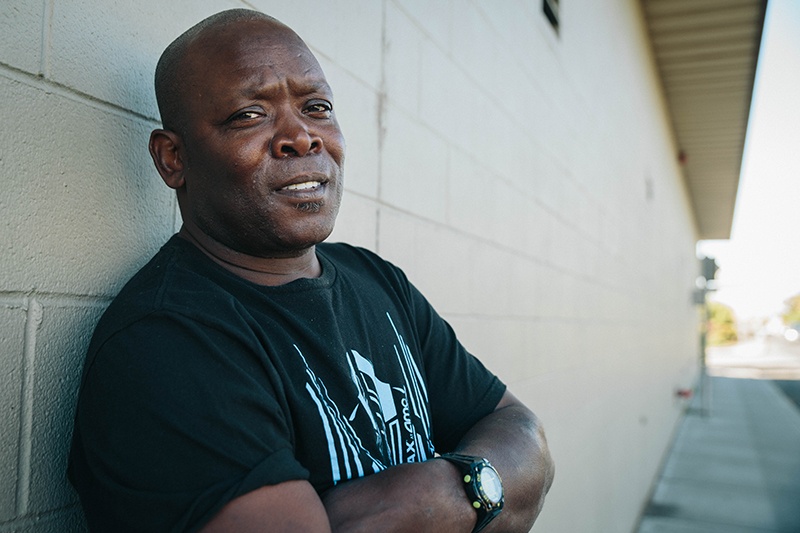 Someone brought him up to Spokane from Birmingham, Alabama, in January, but once he got here, he had no place to stay. Alfred was sleeping on the streets in nothing but his coveralls and a coat until he heard about the Mission.

“People here treated me so good.”

Alfred is waiting on Social Security disability, but in the meantime, he tries to be as much help as he can to other men at UGM. He has a friend here, Michael, who’s partially blind and can’t write, so Alfred rides with him on the bus to his various appointments. 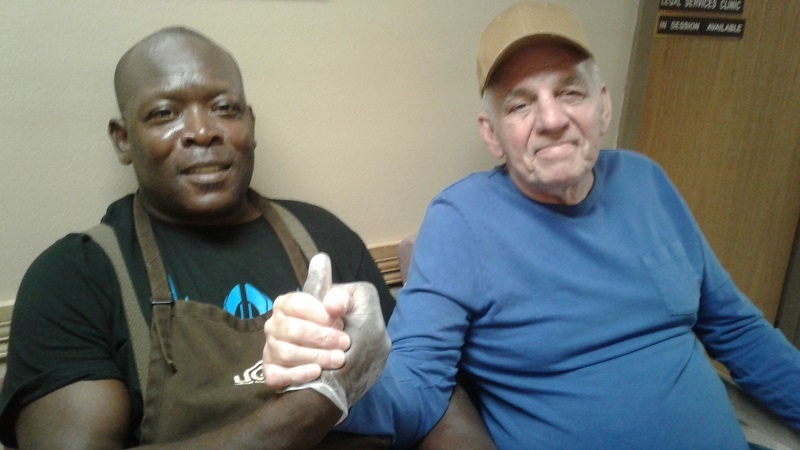 On caring for others who are homeless, Alfred says, “I don’t like to see people suffer. We’re in this world together. I cannot walk away if I see you hungry and I got something to eat.”

Bill has also been homeless for three years – mostly couch-surfing between his mom’s, other relatives’, and friends’ houses. Before that, Bill was a highly functioning alcoholic, working for 17.5 years in the Department of Corrections. He’s a college graduate who helped a lot of troubled teens get back on the right path. 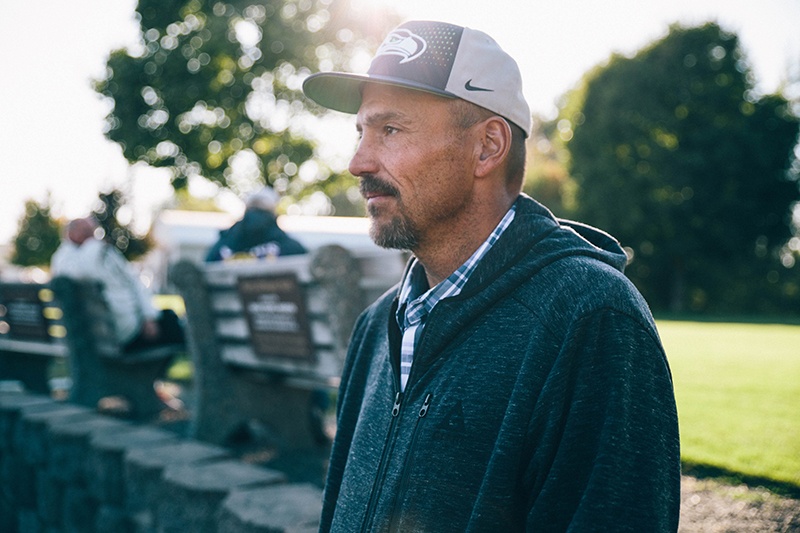 But underneath his professional exterior was a raging addiction that finally got out of control. Bill would stay up all night drinking and then use cocaine to sober up. The vicious cycle led to erratic behavior and, eventually, “manipulation. I was turning into an absolute monster … I took advantage of people – usually the ones who cared the most … and they loved me too much to let it keep going.”

Bill had never been to a homeless shelter, so when he arrived at UGM’s east door in the early hours of the morning, he slept on the doorstep.

A self-described cynic, Bill prides himself on his ability to size people up and spot insincerity, which is exactly what he expected to find at UGM. But one of his first encounters was with Joe Marsh. “He was so kind, so genuine.” Other people turned out to be the same way. “I let my guard down a little bit.”

Bill is living at UGM, working to pay child support and hoping to get into the recovery program.

When asked why people should care about the homeless, he replied: “You gotta help those who can’t help themselves. People fall so far down they can’t see any light…You give people hope who have no hope.”

Luc has bipolar disorder. He had been living in Japan but couldn’t get any mental health assistance, so when he flew back to the States last November, he was in pretty bad shape. He was couch surfing when he met a taxi driver at the library who let him live in his garage. One day the taxi driver told him to gather together his stuff and dropped Luc off at UGM.

Through UGM’s free medical clinic, Luc was able to get the medication he needed and get stabilized. “I had a place to sleep, food, a roof over my head.” He also went to chapel.

“I didn’t even believe in God before I came here, but then I came here and I started going to chapel, which I had never done before, and it just made so much sense. How could I not believe?”

Luc left UGM this week for a job in North Carolina.

“You gotta help ’em,” Luc said about people who are still homeless, “and to help ’em, you’ve gotta listen to them.”

Marcus used to drive a bus, but he struggles with depression and turned to drugs for relief. While there was some temporary relief, “it messes you up real bad. You get into a hole and can’t get out.”

After 15 years of rough living – in and out of shelters from Los Angeles to Chicago - Marcus ended up in a hospital in Kirkland, Washington for mental health issues. On discharge, they sent Marcus, via taxi, to UGM.

When he arrived, Marcus was afraid there was going to be a charge. “This is the first shelter I’ve been in that’s clean and the people are actually nice…The difference with this place is they give you some help, offer you a way out.”

Marcus meets with a counselor weekly. He is in the Employment Ready Program and hopes to get a job baking. “(UGM Chef) Derek Mobley is helping me out a lot.”

Marcus is also rediscovering God. “God was always in my mind, but I thought, I’m not living right. I can’t live up to the expectations he has for me. I grew up in the church, but I got away from it.” Chapel has given him a chance to reconnect.

Marcus still struggles with depression, but he is learning to live with it. “The main thing I don’t want to do…I am not going to go have a drug pity party.”

Asked why anyone should care about the homeless, Marcus replied, “Because you never know who you’re going to help. You never know when someone’s gonna change.”

This World Homeless Day, do one thing to reach out to somebody in need. Click here  for some helpful tips or to get further involved.