We are Thankful - To Those Seeking Help

David, 31, spent half his life homeless. At the age of 14, he was taken from his family home due to a domestic violence incident. After that, he jumped from group homes to shelters to rehab programs to the streets to jail and back to the streets. 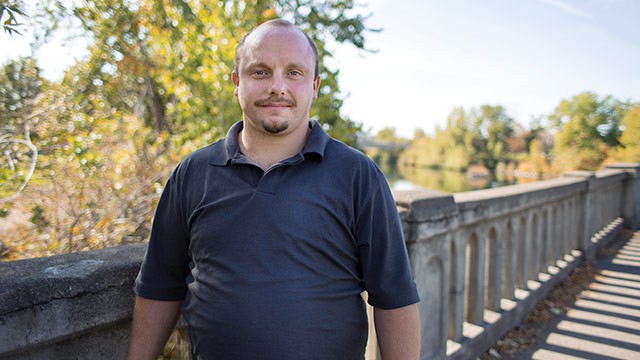 Today, David said he is extremely thankful that Jesus never gave up on him. “I tried to hide. I tried to give up. I overdosed.” But somehow God always intervened. “I’d go hide in a corner of an alley somewhere and some lady would tap me on the shoulder. ‘Here, do you want a sandwich? Jesus loves you!’”

Here at UGM, we, too, are grateful that Jesus pursued David, grateful that he came to UGM, that he committed to 18 months in pursuit of life transformation and that he allowed us to walk alongside him.

“I know that I can be more than I was able to be as a teenager,” David said. “I didn’t have support…or motivation, for that matter. I didn’t believe in myself. Now I can see a future. I have a support network. I’ve been clean and sober for 20 months. I’m actually saving money. I quit smoking cigarettes.”

David has a relationship with God, with his son, with his brothers in the program and the people at his church. He’s looking forward to cashing his first paycheck and paying his first month’s rent.

“I was gonna be the next guy they scraped off the sidewalk.”

Instead, David is a God-dependent, contributing member of society, and we are grateful.

Click here to see all articles for the November 2015 issue.