As UGM's  Women's Lead LIFE Recovery Counselor, Jana Ross helps dozens of women and children every week who are suffering from the effects of trauma, violence, mental illness and substance abuse. 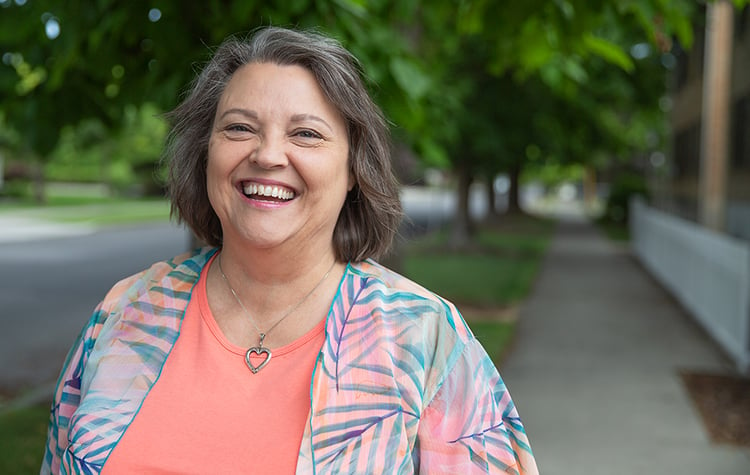 She's been there. Abused and abuser. Traumatized and traumatizing. Trying to help others from beneath the weight of her own mental health struggles. For years, she was a Christian who nevertheless was caught up in a self-perpetuating cycle: trying and failing to “measure up,” then inflicting her own internal turmoil on her loved ones.

Finally, God broke into the cycle to show her the real, wonderful meaning of grace.

By far the youngest of five children, Jana grew up as a bit of an afterthought. She deeply loved her parents, but her dad's work as a pastor and his ongoing health problems kept him and her mom away from home much of the time. Her siblings became her de facto parents, even while they were still children themselves.

The result? Without any bad intentions by her family, Jana went through what a lot of UGM kids go through—trauma, neglect and instability—without knowing what those words meant or realizing the experiences weren't normal. Jana sincerely embraced God as her Savior at five years old, but she still reached adulthood without receiving basic training in good ways to cope with life.

And she already had more than minor things to cope with: Throughout her childhood, her family moved often for another job or an affordable home. She was molested by a family friend at age 11. Her sister died in a car accident when Jana was 16. She moved in with another sister shortly after, and her parents' grief was so paralyzing that they never even reacted to Jana leaving. They moved out of town a few months later; Jana was 17 and pretty much on her own.

“That's when I start looking back and feeling, 'What I do or who I am doesn’t matter to anyone!’ All the sudden I came to a realization (and inaccurately so) that nobody loves me. How can I be lovable?”

Looking back, Jana realizes she had only just begun to feel those feelings—unseen, unloved, worthless—when she married at age 18. It became her “filter” through which she saw everything she did and everything others did. Over many years, constant feelings of failure pervaded her marriage and family life, with her husband feeding off of her emotional instability.

That meant chaos in Jana’s home and heart. For years, her self-loathing and undiagnosed depression manifested not in sadness or lethargy, but in rage.

“I loved God so much and I would read the Scriptures and I would read Christian books... but because of my filter, I just saw how I wasn't doing it right. It just became this cycle of me failing and yelling and screaming.”

Jana’s outbursts, toward her three daughters in particular, imposed her self-loathing onto them. “How I was feeling about myself, they saw in my eyes. No matter how much I adored those kids, ‘get it right’ is what they saw.”

After an incident, Jana would feel so ashamed of her behavior that she would memorize a Bible verse or wear a reminder bracelet to try to embrace repentance and change. “I wanted to remember not to act this way, and I would just do it again and again, and I lived as this tortured soul. A lot of regrets.”

Watching the toll her turmoil took on her marriage and family even as she tried to serve God in church and elsewhere, Jana finally reached out for help through a parachurch organization. God used that journey to break through her filter and make himself known.

It started when another person in a workshop shed tears when Jana shared her story. She didn't feel worthy of that kind of sympathy and at first didn't let it affect her. But afterward, Jana felt a voice saying, “I even give you my tears, and you won't let it touch you.”

“I just started crying. I feel like God was convicting me: 'Let my heart touch you. Let me care about you. These tears are through this man, but they're me.' That was a big moment.”

Her journey began to embrace a fuller view of God.

Once she saw God’s heart of grace toward her, Jana could reject it because she didn’t feel deserving—or she could receive it, embrace it and own it no matter what she was facing or how often she failed. “It was an act of believing that I’m loved. It’s still faith.”

Confidence in being loved immediately began to change Jana’s attitude. She wasn’t perfect by any means, but change started there. “When I truly got God’s love for me, that he was for me and I wasn’t living in judgment every day, there still is a lightness. Living in grace is just so much different. [When I fail] I’m going to own my stuff, and I’m sad, but I also don’t fail as often.”

One of the ways that grace freed Jana was understanding that it doesn't discard God's laws—laws which she had tried so hard to keep but failed over and over. The mere fact that she still wanted to keep them—that she felt so bad after yelling at her children, for example—showed that her heart was still God's and loved his Word.

“All of a sudden it was like, ‘You’re not a bad mom. A bad mom would delight in doing these things. You’re doing bad practices, but you’re a good mom that keeps trying.’”

There wasn't a happily ever after in Jana's family. Even as she began to find internal peace and deal with the true 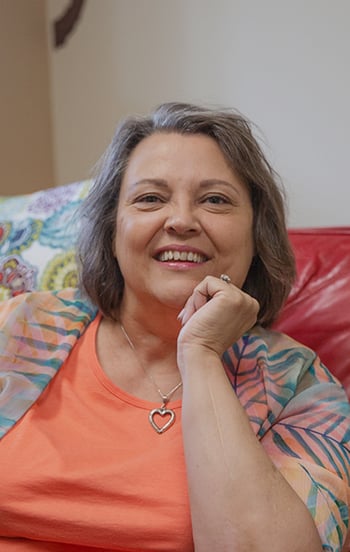 root of her anger, her marriage came to a boiling point and her husband moved out. But even dealing with a divorce, she felt vastly different knowing God’s grace.

It carried Jana through a lot of difficult years: completing her education to be able to support herself, working to heal her relationships with her children, understanding her identity within the church as a divorced woman and a single parent. But God continued to help her through key relationships.

“I know I need that faith and that initial understanding of love from God. But I think it is really hard to live out faith if you don’t have that from others, if you don’t live in a community [where] there can be a variety of people who reflect God’s heart to you.”

Getting her degrees and certifications in psychology and counseling, Jana’s research confirmed what her personal life showed: Relationships keep people in bad patterns, but they also help people break them. Over those difficult years, several couples offered Jana the real friendship that helped her navigate her new situation. That included warning her when she seemed to be slipping into harmful old patterns.

None of it was easy or instantaneous, but Jana is thankful for the ongoing restoration of her relationships with her daughters and their families. She’s also been married for nearly 13 years to Blair, who is “God’s heart to me.” Together, they love being Grandma and Grandpa to 13 grandchildren.

God is still redeeming Jana’s past experiences to empower her to offer hope to UGM residents in recovery. She offers support and training to the staff and volunteers who work with survivors of trauma, neglect and abuse.

Jana takes the lead in training for Trust-Based Relational Intervention, the basis for UGM’s approach to Children’s Recovery. As with Jana’s experience, the first message it sends is “I see you.”

"The first thing he does with Nathaniel (John 1): ‘I saw you under the tree.’ I see you. There was something about that process of somebody seeing my journey, and seeing how different I wanted to be, and willing to walk that out with me.”

That’s why Jana encourages everyone at UGM to remember they have an opportunity to reflect God's heart to someone who needs to see it, whether it's for an hour in childcare or a minute serving lunch or 20 months walking through the recovery program. No matter how long the interaction, we can communicate the message of grace God is sending to all who will receive it. It echoes far beyond their time at UGM.

“If I can offer Jesus' heart for a short season, then hopefully they have a taste of it to recognize it in another community.”

Interested in getting involved with UGM? Consider attending one of our volunteer organizations.