Eric Blackman was trying to live the party life. Alcohol, drugs and carefree days shaped his mid-twenties through early-thirties.

But it wasn’t fun. “I considered it a good day when I woke up and nobody told me I was a jerk that night.” Even after he decided that meth was not working for him, and he successfully quit, blacking out from alcohol abuse remained a daily experience. Eric was couch surfing, avoiding responsibilities and pushing everyone he loved out of his life.

“I considered it a good day when I woke up and nobody told me I was a jerk that night.”

He was miserable, but at this point, he wasn’t entirely sure why. It hurt that his oldest daughter and her mother had entirely blocked him out of their lives, and it hurt that almost every penny he earned went straight to child support. But the pain inside seemed bigger than that.

“I was getting really tired of having nothing and being nothing. It was 2018 and I had stayed the night in my sister’s boyfriend’s tattoo shop. I was sitting there and I thought, I need to figure my life out and do something different, or I need to figure out how to have the most fun while doing this.”

He’d heard about UGM and other shelters and programs in Spokane. “I knew UGM was drug-free, alcohol-free. I wasn’t too religious at that time, but I prayed, ‘God, look, if you want me to fix my life, let me get into UGM. If not, then it’s [unnamed facility] and I’ll party to the end.’”

After saying this prayer, Eric made his way to the Greyhound station and called UGM. They had five beds left and told him to hurry. “So, I picked a direction and went. And God guided me the whole way.”

Eric’s early days at UGM were not immediately comforting. Because he was receiving Social Security, and he needed it to make his child support payments, he was blocked from entering LIFE Recovery. The reason, at the time, was because many men on Social Security had come through, started program, saved up enough money and left. The LIFE Recovery Program is an 18-month commitment that these men were breaking.

Eric was placed in the Employment Ready Program (ERP) instead, and although he wanted to be in a long-term recovery program, he started enjoying the environment on campus and making friends. At minimum, it was a safe, healing place to practice a clean-and-sober life surrounded by men (both in and out of the program) seeking to live God-fearing lives.

“One day, I’m out working in the warehouse and I get a phone call from Jerry Reese. ‘I need you to come into my office.’ So, I go walking in, thinking I was in trouble or something, and Jerry says, ‘We’re going to let you into Program. Stop going to ERP classes and start gearing up for LIFE Recovery.’”

“I’d been praying about it. Ron Molina [Men’s Shelter Chaplain] taught me the best prayer: God, change them, change me, or change the situation. I was praying that every day. I still do.”

In this case, God changed them. Even on Social Security, Eric was welcomed into the program. “I had told myself that if I ever get this chance, I’m going headfirst. And I did.”

“I had told myself that if I ever get this chance, I’m going headfirst. And I did.” 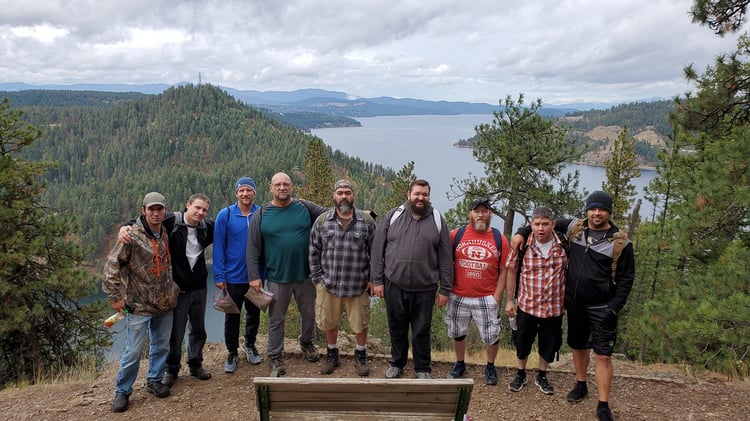 From the beginning, Eric took every opportunity he could to dive into the confusing web of lies, pain and motivations behind everything he’d done. “In phase two, we start Genesis, and in Genesis we’re supposed to make a list of everything we’ve ever done wrong. And I held nothing back. I was the first one to go.”

He shared how he’d become a father at 18 and how the mom had left him and taken the child with her, how he’d turned to drugs to avoid the pain, and how she’d taken him to court for missing child support payments at only 19, and how he’d found a job in the oil fields in North Dakota where the culture was steeped in drug and alcohol abuse. He shared that he had two more children and didn’t know how to connect with them. He shared his journey choosing to drink heavily every night and pushing his friends, parents and siblings out of his life. 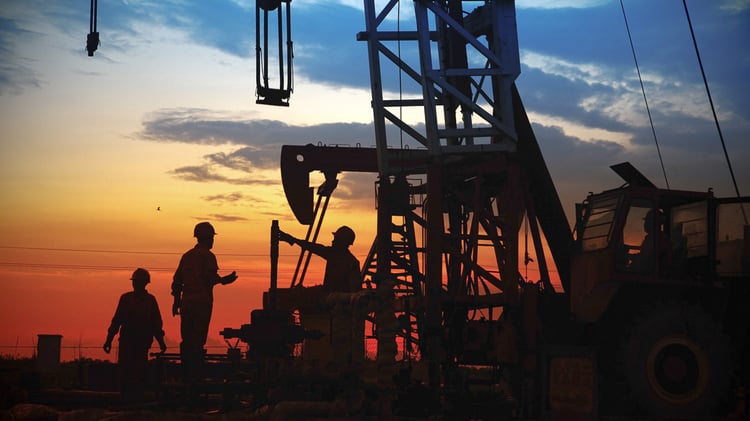 “Phase three is the hardest phase there is,” he says. “They cover really difficult stuff. We got into childhood issues.

“Me and my brother had been given up for adoption, we’d been adopted by this family. My whole life, I always had anger issues. I was the kid who was always getting kicked out for fighting. It didn’t take much to trigger me. Then, Mom and Dad divorced when we were eight or nine, and our stepdad used to be violent.”

Through self-evaluations, counseling and community, Eric started processing the hardest events of his life. Even though his stepdad had a heart change later in life and wound up being a support for Eric when he was at his worst, the early years with him were frightening. “You couldn’t say ‘why?’ in the house.”

Sharing how his childhood had been confusing at best (and at times, abusive) steadily opened Eric’s eyes to the reasons he’d gone down the path he had. And it helped him understand why the events with his first child’s mom triggered him and caused him to run to substances that would dull his mind and feelings. He drew a parallel between his childhood fear of not fitting in and his inability to win his girlfriend back and keep his child.

Understanding the root causes of his addiction helped Eric make new decisions, decisions that moved his life in a new direction.

“So, from there, I got introduced to not just reading the Bible but understanding it. It wasn’t just words anymore. I would read every verse, every sentence. The more I started diving into it, the more I started putting my trust in God, and the more things started happening, and I could realize just how much God’s hand was in my life, guiding me.”

Toward the end of program, Eric made contact with his biological mom, his two younger children and their moms, and he worked to restore his relationships with his brother and his five sisters.

Eric lights up especially when he talks about his middle child, Charlie Rose. “She and I talk quite a bit. She’s ten years old. She’s excited to come and spend the summer with me next year. Last year, she asked me, ‘Eric, why do you care about me so much?’ And so, I didn’t know how to answer that, because we weren’t telling her yet, so I asked to speak with her mother and said, ‘I’m not going to lie to my child,’ so she went ahead and told her. She started crying. And she wanted to see me.”

Eric’s youngest, an eight-year-old son, doesn’t yet know who his dad is. “We’re waiting until he’s older so as not to confuse him. He has a stepdad and his life is stable, but I’ve talked to him a little. He’s the spitting image of me.” 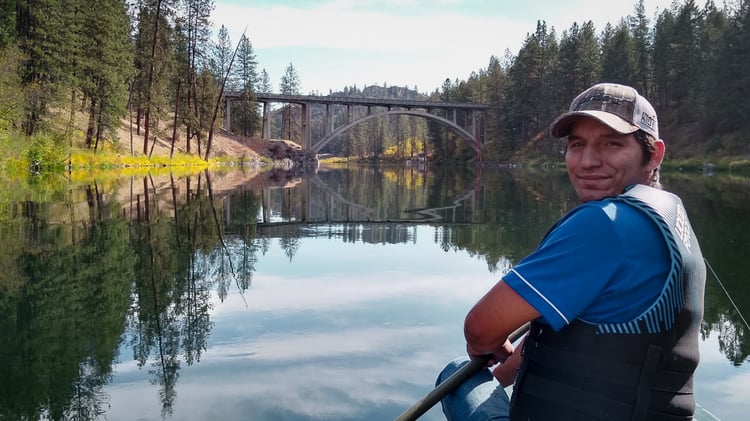 Eric’s delight in his children is evident. He’s aware that restoring these relationships will take time, and that it is worth every effort and every minute of the healing journey he’s on. “The 18 months in program isn’t designed to fix you. It just gives you the tools to be able to live a God-fearing life.”

“The 18 months in program isn’t designed to fix you. It just gives you the tools to be able to live a God-fearing life.”

He’s reignited friendships with all six of his siblings, too. And one of his sisters has even welcomed him to rent out her basement as he saves money and gets settled in the career of his choice: In November 2021, Eric was hired as a Resident Assistant at the Men’s Shelter. “Now that I’m learning to love my fellow man, I want to be a part of that. I want to impact somebody in a way that will change their life.”

Eric knew he needed help changing the trajectory of his life. UGM was available when he reached out. Healing and reconciliation take work—hard work: often physically, mentally and spiritually—and having a supportive community who comes alongside can make the difference between trying and succeeding. Eric was welcomed into the safe, healing community at UGM because loving community members like you have committed to providing the resources necessary to serve all who come to our doors.

“If it hadn’t been for UGM, I’m pretty sure I’d be dead. This place saved me. Anybody and everybody that is connected with this Mission is literally saving lives. Everybody plays a critical role in this place.”

This Christmas, whether you're praying for our guests, serving meals or donating financially, we want you to know that your love for our friends in crisis is deeply felt. Thank you.