These gifts from Men’s Recovery alumni represent Jerry’s knack for getting to the heart of issues: One of the men once called Jerry “the stick God uses to poke us,” and it stuck. It’s actually an honor, because as the men and Jerry both know, dealing with the unhealed wounds of the heart is where real recovery is found.

“They know that I love them and care enough about them to take them to the hard places and be in the journey with them.”

After 23 years helping men overcome addiction, homelessness and a host of related issues, Jerry is getting ready to retire – but, God willing, Jerry’s fingerprints will remain on what has become one of the best recovery programs in the country.

That’s because most recovery programs “don’t approach it from the right aspect of what a guy really needs. They stick with superficial stuff. They don’t go to the heart, they don’t get underneath. You’ve got to go there in order to help a guy. Most people, when they go to recovery, they never really deal with a broken heart.”

Jerry arrived at UGM as chaplain in 1997, when there was still only a handful of staff, so his responsibilities at the Men’s Shelter were widely varied. Shortly after arriving, he was tapped to set up the first Vocational Education facility at the shelter. Overseeing that area, Jerry began to see how crucial the educational experience is to the recovery process, and he was part of the team that laid the foundation for the recovery program as it is today.

With the implementation of the Grace Process at UGM in the early 2000s, Jerry formally took the lead of the men's recovery program. He also met Kari, UGM’s Grace specialist, who became his wife and a wonderfully suited “other half.” Their personalities couldn't be much more different, with Kari's empathetic people skills and Jerry's pragmatic directness. But Jerry has learned what he knows about the softer side of recovery from Kari.
“Kari has taught me so much ... She's really helped me relationally, to develop those relational skills and develop greater sensitivity and compassion and empathy for people. How to get in touch with their hurt and pain and how to guide them through all that.”

Over the years, Jerry and his team have incorporated other life-changing elements of the program, such as the Genesis Process, Authentic Manhood, and the Life Languages profile that helps participants understand and relate to one another and themselves.

And Jerry’s worked hard to establish the consistency UGM residents need in order to rebuild the ability to trust, which has been damaged in each of their lives in one way or another. That means showing up, being the same person on the clock or off, confessing mistakes, and graciously saying hard things that need to be said. That’s how Jerry has earned the trust of the residents, most of whom have never had a healthy father figure in their lives.

He gets it. He’s been there, in fact. And like a good father, he cares enough to lead them through a little pain for the sake of freedom in Christ − to help them stop running away and face their problems with the power God gives to overcome them.

Though he didn’t know it, Jerry was in training for UGM the entire first half of his career. Enlisting in the Air Force took him all across the U.S., including Guam. He worked in administration, revealing a God-given gift for managing people and projects. He enjoyed a lot of professional success because of those hard-wired administrative skills.

“I’ve never had to look for it. That was one of the weird things that I discerned.... I got asked to do things.”
Meanwhile, he was gaining experience that would be invaluable in his time at UGM.

Jerry worked in support of military families. He learned how various programs, systems and technologies were designed. He worked with airmen who were struggling with drug and alcohol addictions, as well as other personal issues. Over and over, he found people coming to him for help. “God orchestrated that I would be able to be in work environments that would hone and refine those skills.”

But it wasn’t his career that gave Jerry his best preparation to work with people in recovery; it was the dark spiritual journey that came when he went through a divorce and became a single dad with four young children. That began the seven hardest, most painful years of his life.

“God really pressed in on me, and really sifted me and purged me and did a lot of work in me. That went on for quite a few years... That’s where my journey of recovery really started.”

Jerry clung to God’s faithfulness and good plans for his life. He began to face deeply ingrained issues that arose from his difficult childhood. And he found out God was the only person he could really trust – he certainly couldn’t trust his own way.

“I had to do a lot of work. But I wouldn’t trade it for anything.”

Getting ready to retire from the Air Force after 24 years, Jerry planned to pursue further education for a job in business management. But though it was a logical next step, he wasn’t excited about it.

“In my heart I wasn’t satisfied with that. So I just prayed all the time: ‘God, I don’t care what it is, I just want to be in the center of your will. That’s all I care about.’ And there were many days when I wept and sobbed over that because money didn’t matter to me, or positions. I don't care about any of that stuff. Not important to me. I just wanted to be where God wanted me to be.” 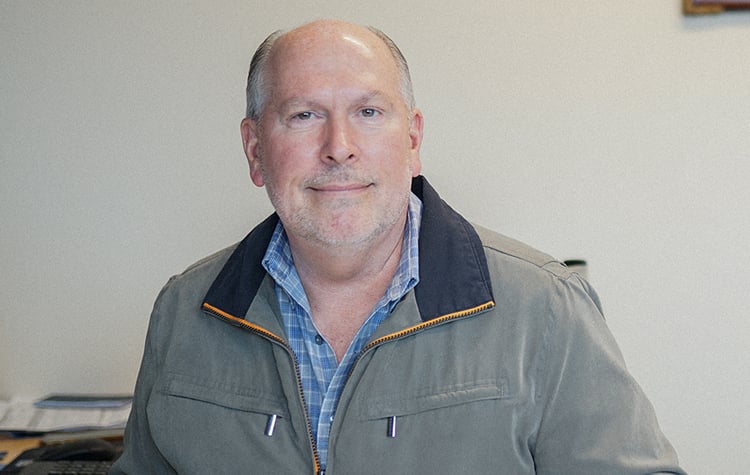 That’s when a church friend mentioned the opening at the Union Gospel Mission. Jerry met with Men’s Shelter director Randy Altmeyer, spent time in the shelter with residents, and prayed.

The opportunity struck a chord in Jerry’s heart. Fifteen years earlier, shortly after a colleague had led him to faith in Jesus, Jerry was praying and reading the Bible when he heard the Holy Spirit say, “One day, you’re going to have a ministry with men.”

At the time, Jerry was surprised: “I had never had any experience like that. Where is this coming from?” Jerry knew he didn’t have the relational skills or wisdom to do ministry. But he wanted God’s will. He told the Lord, “If that’s true, then do whatever you have to do in my life.” Several times during his military career, Jerry heard the Spirit’s same message in his heart and gave the same answer. God was working on his heart, even − perhaps especially − through those darkest years.

Finally, UGM became Jerry’s chance to put his training into practice and follow that call.

Know God and others

It’s been a fruitful 23 years of sharing hope and healing with broken men. When counselor Mike Scholz takes the director's reins from Jerry upon his retirement this summer, Jerry knows Mike will continue the real crux of the recovery program: Healing the heart.

As he leaves, Jerry wants to remind the UGM community to focus on knowing the depth of God’s love, for UGM staff and partners as well as the people we serve. He quotes Jeremiah 9:23-24:

“Let the one who boasts boast about this: that they have the understanding to know me, that I am the Lord, who exercises kindness, justice and righteousness on earth, for in these I delight,” declares the Lord.

Jerry points out that we all long to be truly known; God himself wants to be known rightly. And so do the people who come to UGM for help.

Knowing them in their restored selves is also Jerry’s greatest career satisfaction.

“The most satisfying thing is watching guys experience freedom. They’re free from their addictions, they’re secure in who they are, they’ve received healing.”

There's nothing like experience to help you truly understand an issue. UGM Executive Director Phil Altmeyer's 30-plus years in homeless ministry have given him powerful insights to share in his free e-book, Lessons from a Homeless Shelter.

Easter Series: What Does Sin Have to do with Homelessness?
Winning Essay: What I Wish People Knew About Homelessness
Addiction Recovery: A Healing of the Heart
A Look Inside Men’s Recovery