Food is about so much more than food. It symbolizes grace, warmth, community, family, a sense of belonging.

Bethany Kuhn (pronounced Que-in) gets that: “My daddy was a preacher. Every church function had food. Every time we went visiting or calling, there was food involved. So, I feel like any kind of interaction you have with people should involve food.”

People generally come into UGM shelters hungry, worn out and discouraged. They receive a tray of food, lovingly prepared, from a smiling volunteer and sit down at a table surrounded by community. The meal is an entry point - a first step - a small taste of an unimaginably bigger, life-changing grace. So, when Bethany talks about her job serving the women and children at the Crisis Shelter, it’s hard for her to stick to prep lists, sanitation and meal counts.

“If I were just cooking, it would be way easier.” She laughs. “Ministry is hard because you have to get in the trenches with them. You can’t just stand there and tell them what to do. I mean, I guess you could, but I don’t think you’d be very effective. When you care about people, you get the good, the bad, and the ugly, and you feel their pain. And you journey with them. That’s not easy. But it’s rewarding.”

The opportunity to minister to women and children in crisis is what drew Bethany to the job. Married for 35 years with five adult children, she wasn't at all sure she wanted a job. “At this stage of my life, if there’s not a ministry aspect to it, it’s not something that interests me. Ministry really is what I love. I mean, I love cooking, but…”

Bethany has been working in the hospitality industry since she was 15, and as she said, she comes from people who love food. Before coming to UGM, she worked as a caterer and then as the chef at Silver Lake Camp for eight years. She was used to cooking for 800-plus, so sixty women and forty children at the Crisis Shelter “seems small.”

As someone who likes to cook from scratch with fresh ingredients, she thought the hardest part of the job would be working with donated product, which is often stressed or nearing its expiration – “...not being able to buy food, just making do with what comes in. But I’ve actually found it quite enjoyable and not as difficult as I thought it would be. I feel like I’ve actually become a better cook in that respect because I’ve tried things I would not have tried normally.” 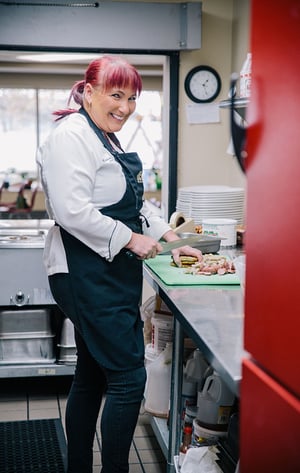 For instance, ground duck. UGM got a large quantity of ground duck – an ingredient Bethany wasn’t familiar with. One of the other UGM chefs had used it to make shepherd’s pie, which didn’t go over super well, so Bethany thought, “I have to find something to do with this duck where they won’t know it’s duck. Challenge accepted! I made a Zuppa Toscana with duck sausage.” And no one was the wiser.

Another time, she decided to make stroganoff. She knew she had seen sour cream in the UGM cooler, but when she went to get it, someone else had used it (Bethany does her “shopping” in the main UGM walk-in coolers and freezers). “So I used Greek yogurt, and heavy cream.” Not the exact result she was hoping for, but close.

She said lately ribs have been the ladies’ favorite. “Baby back ribs. Boneless beef ribs.” One thing she sees every day is God’s incredible provision. This community is generous beyond belief.

The food is not the only thing that’s unpredictable about her job. “You never know what’s going to happen when you come in.”

Bethany’s kitchen assistants come from the guest population at the Crisis Shelter. Some of them, most of them, have never worked in a commercial kitchen. Many have not done much food preparation of any kind, so she finds that she needs to teach the basics on a regular basis:

“The girls are fantastic. They really are.” They just don’t tend to know much about working in a kitchen, and Bethany recognizes that is the least of their worries. 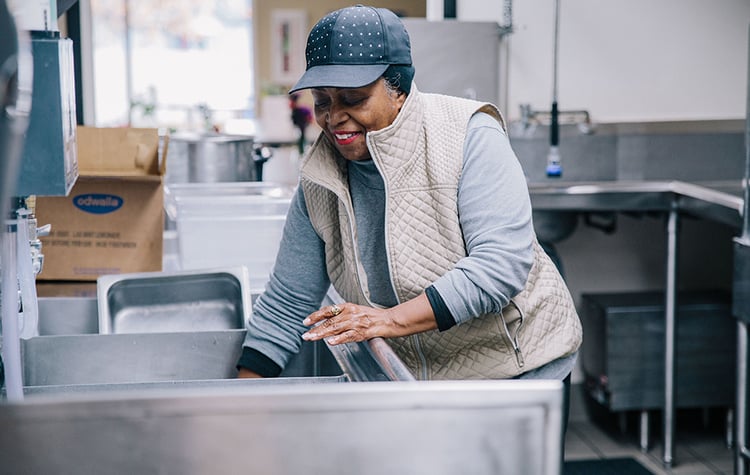 She tells them: “We are all on a journey. Every one of us. And none of us have arrived. I definitely haven’t arrived. I’m learning right along with you.”

Bethany has been at UGM for a little over a year, and what a year it has been. “I feel like I’ve probably changed more this year than any other year. I’ve learned so much and grown so much and had a lot of ah-ha moments."

When asked to describe one of those ah-ha moments, Bethany pauses, and when she starts to speak, her voice cracks. Her green eyes fill with tears.

“In June, my niece passed away. She died in Spokane County Jail. She had suffered with addiction for years." Bethany's niece was just 14 when she had her first child, a girl, who was also born addicted to drugs. 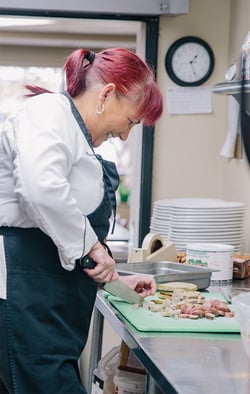 Later, her niece had another child, a boy, and Bethany adopted him. "She called us from the hospital, 19 years ago, and said, ‘Auntie, I have him, and they won’t let me keep him. Will you take him?’"

Her niece’s death was devastating for Bethany and her family. “It was just a really raw, difficult time, and I think I realized at that point, that that is why I do what I do. Because I feel like I wasn’t really able to help her…If I can help someone else, that’s what I want to do.”

Bethany has a tendency to minimize her contribution: “I fill their tummies so that God can fill their hearts. When you’re hungry, you can’t focus.” But she has had a couple indications that what’s she’s doing is way more than “filling bellies.”

Recently, she received a call to come to the check-in desk. A former guest was waiting for her there. She had come specifically to thank Bethany. “She said, ‘I can’t stop thinking about you and what you did for me. When I came, I was so broken, and you were just always there with a smile. You always encouraged me. You always gave me a hug, and I just really needed to come back and let you know. I got my kids back. I’ve been clean and sober 163 days.’ (I wrote it down because it was so important to her.) ‘I just keep thinking about how much you meant to me.’”

Bethany was reminded of the Bible story about the 10 lepers and the one who came back to thank Jesus for healing him. That one woman represents so many others who Bethany has touched in one year.

Food, in the right hands, has the power to make people feel loved.

Bethany has the right hands. 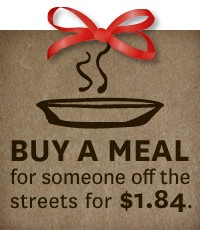 Recovery in the Kitchen
Food Partners: A Win-Win Relationship
Setting God's Table at a Homeless Shelter
Feeding the Hungry, Body and Soul