Emily was in a dark, dark place.

Her addiction ended her 14-year marriage and cost her custody of her four children. “My relationship with my kids was destroyed. I no longer had any contact with them.”

She lived in a small studio apartment with an elderly roommate who died from his addiction to crack cocaine. “It was infested with roaches. It was infested with bed bugs. It was a crack house… Leading up to this, I slept outside, sometimes on the ground. I didn’t have any place to stay, just a blanket.” She was in an abusive relationship with a man who tied her up, poured lighter fluid all over her and set her on fire. She went to the hospital. He went to jail for nine months; at the end of which, she took him back. “I didn’t even care; it was familiar.” It cost her her right arm. “I burned my thumb on a lighter. That’s how I got an infection. Smoking meth. I used meth for a couple months at the end of 2014.” The infection got so bad that her arm had to be amputated.

“Addiction was my master. It controlled me. It was all I thought about."

Emily met her husband when she was 15 and got married at 17. “We had no idea what we were getting into.” Her husband was three years older. When he joined the Air Force, they moved far away from family – first to Florida, then to England. “I think I never really knew who I was. I mean you don’t know who you are at that age.” They lived off base – away from other young families. Emily got more and more isolated. And then her husband got very sick – bed-ridden. In the midst of taking care of him and their two young children, she became severely depressed. To escape that sense of hopelessness, she started taking the pills prescribed for her husband.

“I was taking his Percocet, and I didn’t know what a dangerous road that was. I just knew it made me feel better. It made me feel happy. It put me in a good mood. Everything seemed a lot better when I was taking pills.” She became dependent. When her husband discovered she was taking his pills and cut her off, she started drinking. She abused cough syrup for a while.

“The only way I can describe it is like this obsession with not being in my right mind. You know, with wanting to be in my altered state.”

Emily and her husband had two more children. He went through a medical retirement from the Air Force, and they moved back to the states. Emily’s addiction escalated. She got two DUIs within a month and went to jail for 60 days. During that time, her husband started separation paperwork. “He picked me up from jail and dropped me off at a little apartment. He gave me a bicycle and said, ‘good luck.’ I hadn’t worked since I was 18. For 12 years, I had been a stay-at-home mom. I was suicidal then.”

From the depth of Darkness to Light

For four years, Emily’s life spiraled completely out of control.

“I quit talking to my family, and I quit answering the phone. The police knocked on my door one time because my parents hadn’t heard from me in a month and they thought I was dead. They asked the police to do a wellness check to see if they could find me. So, I didn’t think about the future because I tried to stay drunk or high because I had nothing.”

In the midst of all this darkness, Emily got caught for smoking marijuana. She was living in Kansas where it was illegal and she was put on probation for a year. Getting caught and put on probation may have saved her life. “Once a month, I had to check in. Once a month I had to be sober for three days because it takes three days for crack cocaine and alcohol to get out of your system. So, for three days, I would sit there in my apartment, this little studio crack house, and I would start thinking because I would be sober. And I would start thinking about my future. God used that time; I know he used that time.

“It was about four or five months in summer time. I think it was July 2017. Nobody was there; the drugs were gone. It was just filth, and I had been thinking about my future for a couple of months. It didn’t happen overnight, but I finally came to that place of all the way willing. But I still didn’t see how. How could I ever get out of this?

“I had prayed to God before, but…it was desperation. I’m going to jail, so save me. It wasn’t willingness. When I came to that place of praying out of a willing heart, God started to move.”

And he didn’t waste any time. Emily’s mom and dad had been praying for her for years. Her mom had been researching resources for Emily online and found UGM Women’s Recovery. She sent Emily a packet of information and Emily took it to her probation officer. “This is what I want to do,” she said.

"Maybe you have to know the darkness before you can appreciate the light." - Madeleine L'Engle

During the times Emily had to be sober, she had moments of clarity where she was in her right mind. “I could see that there was a crossroad – keep on the way I was, and there was nothing; it was death – or, it was going to be a whole lot of hard work. But it was either/or.”

Emily chose hard work. She chose life. She got off probation on February 7. “My mom and dad drove through a snowstorm and picked me up February 10th. They drove from Deerpark to Leavenworth, Kansas.”

February 10th was her first day of sobriety. “That was so scary. Even though my life was hell, it was familiar. And I knew when I got in that car, I was giving up drugs and alcohol forever.” She detoxed in the car on the way home. By February 21, she was at the Crisis Shelter. And in March, she was at Anna Ogden Hall.

Emily had accepted Jesus when she was seven years old, but somehow, for a lot of years, she had missed the point.

“I didn’t know the gospel like I do now, the gospel of grace. I was always trying to be better. I remember praying every single night, and the reason I prayed is because, if I fell asleep and I died, I didn’t want to go to hell. It wasn’t because I wanted to tell God about my day and thank him for my day and tell him the things I was worried about and what I was going through. I knew God as somebody that I had to do this, this and this or he was the one who was sending me to hell.”

At first, Emily just followed directions. She was told she had to stay at the Crisis Shelter for 30 days. “I packed a bag and went. I was at the Crisis Shelter within two hours…I just felt like the bottom, like whatever anybody tells me to do I’m going to do. You know, I had that willingness.” 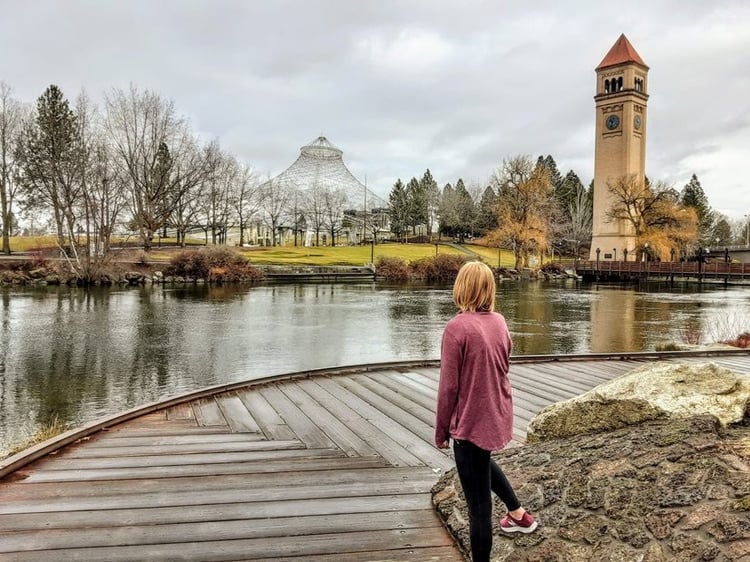 Emily described who she is today: “I take responsibility. I don’t make excuses. I’ve owned up to my mistakes, and in doing that, I also let go of shame. Shame kept me stuck. From the time I was divorced and lost my kids, I mean the grief and the shame just kept me stuck.

“Instead of staying in shame, I know who I am now. I’m loved. God created me because he loves me and wants a relationship with me. He doesn’t want me to sit in shame.”

Emily works in a group home for the Arc of Spokane. She also volunteers at Life Services where she did her business practicum and at Project ID (Identity Beyond Disability, a program for adults with intellectual and developmental disabilities). “I have a heart for these people. I love them. They’re my people. And they’re just always so happy to see me, which helps.”

One of Emily’s biggest false beliefs was that her worth was dependent on other people’s approval: “That I need to do a, b and c to gain approval from friends, family, my social group, God. I don’t need to do a, b and c. It’s already been done. I learned that Jesus has done it all, and it’s so freeing. Once I accepted that, and I learned about God’s grace… I do things now because I’m so loved. I live life knowing I’m loved.”

Winning Essay: What I Wish People Knew About Homelessness
We Asked Shelter Residents to Define Grace
Women's Recovery: Reflecting the God Who Sees
Confessions of a Good Girl