Where Does Our Hope Come From? Robert's Story

Our hope is built on nothing less than Jesus’ blood and righteousness.

“The Lord your God is in your midst. A mighty one who will save.” (Zeph. 3:17) Jesus entered human history to take our sin and shame to the grave, to make a way for us to know the nearness of God. Drugs, lust,

violence, pride. No sin is too great for the blood of Jesus to wash away. On that, we build our hope. 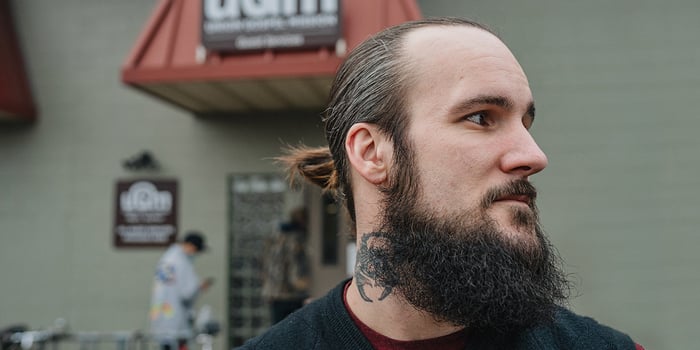 Having endured a horrific childhood, Robert entered adulthood ill-equipped but eager. He pursued an education, started a successful business, married, and bought a house in the suburbs. When the marriage started to struggle, though, he and his wife turned to cocaine, neither of them knowing how to cope. “And one day she didn’t come home.” Robert’s life quickly fell apart. “I got on Tinder. I was sleeping around. I was basically a womanizer, hurt a lot of families. It’s shameful.” That lasted two years before he read a few passages in a Bible he found and started wanting something different. He stopped using, stopped sleeping around… but things kept getting worse. “I lost everything, my job, my will to live… everything.” For months, he slept rough on the streets of  Spokane's South Hill, wrapped in burlap sacks, wishing to die. “I wasted so much of my life. I just didn’t think it was possible to change.”

And then someone on the street suggested UGM. “I was highly skeptical, and I remember saying, ‘God, if you want it to happen, you’re going to have to make it happen.” He took a few steps and there on the ground was the $2.00 he needed for a bus pass. He arrived at the Men’s Shelter thirty minutes later.

“It’s been painful, but God has become a parent to me. He is the perfect parent. Turns out I just had this God-shaped hole, and I’d been packing everything I could into it, and of course nothing had worked. I tried to fill my life with relationships, but now I have the relationship I need. I will never again have to be alone.”

On Christ the Solid Rock I stand. All other ground is sinking sand.

When hope is built on money, health, politics or people, it can be swept away as quickly as a sandcastle caught in a wave. But hope built on Jesus Christ cannot fail. That is why UGM offers faith-based Recovery programs and counseling. As Phil Altmeyer says, “We are not here to keep people homeless. We believe God has something so much better for them.”

Click here to see all articles for the March 2021 issue.