“If we claim to be without sin, we deceive ourselves and the truth is not in us.” – I John 1:8 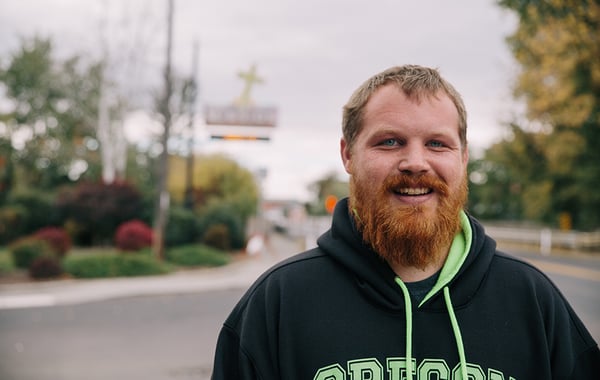 We don’t talk much about sin on the UGM blog - mostly because we would never want to imply that people experiencing homelessness are any bigger sinners than the rest of us.

Sin destroys the lives of people experiencing homelessness in the same ways it destroys all our lives: by separating us from God and his goodness, by damaging our relationships with other people and by damaging our understanding of ourselves and our place in the world.

Part of being honest about who we are is admitting that we are sinners.

Pretending to have it all together

Brian McGlocklin was living in his car before coming to UGM. When the engine seized, he had nowhere else to go. Shortly after he arrived, he started hearing about the long-term recovery program, and he thought, Why not? “The way I had been living my life up to that point hadn’t been working very well.”

Brian had been using alcohol and marijuana primarily, but he was pretty open to self-medicating in any way that would help bury the feelings he didn’t want to face.

Brian’s older brother died when Brian was 15, and from that point on, life was a bit of a mess.

“I was seen as the one who could handle everything. From a young age, I was taking care of other people and focusing on them rather than myself, and that escalated a lot after my brother died. My mom completely shut down and went further into her addiction. My (younger) brother shut down, and I was thrust into the role of taking care of everyone else whether I liked it or not.”

Brian faced a blatant no-win situation. On the one hand, “I was seen as the intelligent one, the athletic one, the one that could handle anything.” On the other hand, the expectations were so high that Brian could never live up to them. Disappointing people was inevitable.

“Never let them see you sweat” might have been Brian’s life motto.

“If I kept everything in and didn’t ask for help or show any emotion, then I was fine, but when I did ask for help, then I was struggling, and I wasn’t good enough. Why can’t you live up to your potential?”

Brian became so good at stuffing his feelings that he lost any sense of who he really was.

Brian always thought he believed in God, but he didn’t care much for Christians.

“There was a lot of hypocrisy, a lot of judgment, and I didn’t want to deal with it.

“I’d see a lot of ‘hypo-Christians’ as I would call it. People would judge you and then do the same thing later when no one was looking… And I also was hesitant because I had a lot of questions that I didn’t know the answer to. I was ignorant as far as the Bible.” 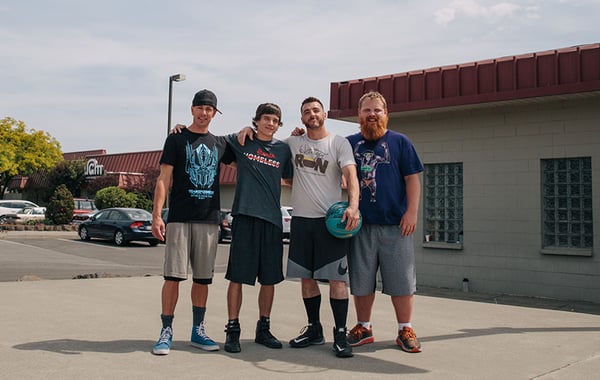 “I saw genuine Christianity here. I saw people – speaking of staff members – who are the same off the clock or on, and I saw genuine change in people who were in the program after they chose to grow in their spiritual walk with Christ. I had never seen that before. I never grew up with it.”

At the same time, he began to read the Bible for himself. “The first time I ever read it was here, and then I had a lot of questions that people who were further along on their spiritual journey could answer…instead of just dismissing it.”

Brian is a thinker, and he had a long internal debate with himself before committing his life to Christ last May. 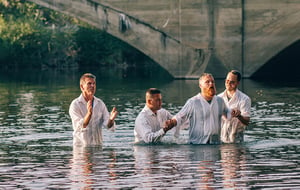 “Being saved is not as complicated as I used to think it was. I thought it was a very long process, but all it is really is accepting Jesus into your heart and declaring him as your Savior. It’s simple to do – to actually get saved – but it’s hard to continue and actually live that way because you have to change a lot of your old behaviors. You have to die to your old self. But it’s very, very helpful, and I would recommend it to people who want to change. It’s hard to genuinely do so without getting saved.”

Will the real Brian please stand up?

Brian said his relationship with God has changed him radically.

“I didn’t think it was going to or I didn’t think I was doing it right. I heard that’s very common, but it has genuinely changed me from the inside to the out. I’m a lot more compassionate. I realized a lot more about myself. It helped me to know who I am. I never really did.

“I realized how much I liked to help people, how extroverted I actually am. I used to think I was introverted and I didn’t need people, I didn’t like people. That is very much the opposite.

“And I have more of a… I guess the word is spiritual conscience. It’s a lot harder to rationalize and justify my way out of doing the right thing because of the new standards I have from being saved.”

Brian said his faith has also pushed him to take risks, “specifically in relationships.” 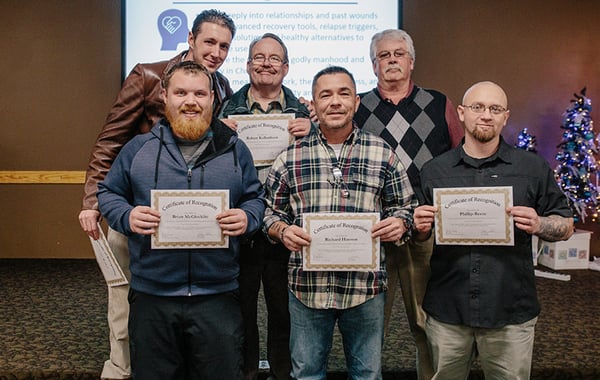 “I’ve shared a lot of deep personal things that I’ve never shared with another human being in my life… I used to be petrified of opening up and being vulnerable, but one of the things you do in program – before you even start – you have to share something about yourself that is personal, and you have to be vulnerable in order to do that. But when you do it here, people do not judge you for it. They do not condemn you for it. More often than not, they tell you how they relate to it and how it kind of applies to them, as well, and then you have a real conversation about it and you actually build relationships rather than just surface connections.

“And then there’s the accountability piece. I used to think that was strictly punishment, but it’s owning up to your stuff and then people building you back up from it and teaching you how to change, instead of just condemning you for it.”

“Seeing myself is different because it actually gave me the courage to look, not lie to myself and not avoid it. It’s very difficult, but it’s worth it, and I would not be able to do it without coming here or without choosing to be saved."

Brian strives to be authentic and part of that is admitting his failures, his weaknesses, his sins.

“I know where I was when I walked in that east door, and I know I’m not better than anyone else. I used to be arrogant and over-confident in my intelligence, and I would think I was better than other people. But I’m not. We are all humans. We all suffer. We all fail, and we can all change. I didn’t think that was possible, but now I do.

Brian even goes so far as to invite other people to speak into his life. “Sometimes you don’t even see what you’re doing, but if you have someone that cares about you, they can point it out and then you can work on it, rather than just avoiding it or being oblivious to it.”

Today, Brian doesn’t have to pretend to be someone he’s not, because he likes himself.

“I’m not running around with inner turmoil every day with something that’s eating away at my soul. I have genuine connections with friends that aren’t based on what I have. It’s based on who I am.”

And, when asked to describe his relationship with God, Brian said: “It’s new almost every day. I see his hand all over the place at the Mission here and in our program. I feel relief from opening up and sharing stuff that I have never shared….I get a lot of joy out of being other-centered, which is a goal of being in program. Rather than being self-centered, which I was in my addiction, being other-centered. I know that God’s going to take care of me as I’m taking care of other people. But it’s new almost every day, and it’s peaceful.”

Brian and the other residents aren't the only ones learning from their experiences at UGM. Phil's free ebook recounts a few of the things he's learned through more than three decades of ministry at UGM. Check it out!

Recovery: We are all broken.
The End of Striving: How the Gospel Brings Rest to the Weary
The Great Pain Escape
Labels and Life Change: A Business Partner Feature
Young Fatherhood, Pain and Recovery: Eric’s Story