In the Business of Giving Back

Jason McSteen gives where he does business.

Looking at him today – married, prosperous, the owner of a successful furniture business with three stores – you might not suspect that a little over four years ago Jason McSteen was homeless. That’s exactly why he named his store “16 Cents, 3 Shoes & 5 Socks.” Those were his sole possessions when he walked through the east door of the Union Gospel Mission on December 1, 2012, and he doesn’t ever want to forget. 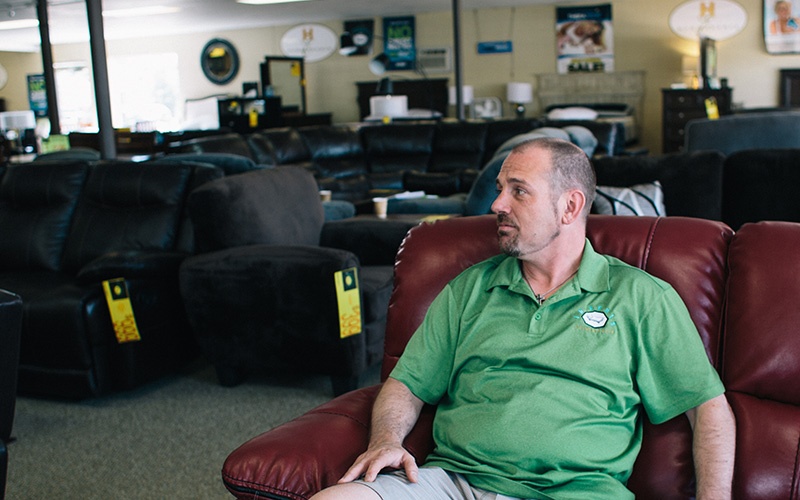 “The day I walked in there…I don’t know how many days I had gone without eating. I was literally in a drug house, and I stumbled in there [UGM]. Immediately, I was able to have a safe place to sleep. I was able to shower daily. I was fed very well. Their kitchen and their food, all those things were vital coming out of that foggy haze of drug addiction and just abusing my body and my spirit.

“But the biggest thing was every single night going to chapel and sitting in the front row listening to Randy [Altmeyer] or whatever church was coming through and listening to messages. I didn’t walk in there on a winning streak, and I started meeting other people there, guests that were there and people that came through. I started hearing other people’s stories of why they were there, and I started finding some other men that were there to get back on their feet and change the direction of their lives and that’s what I decided to do.” 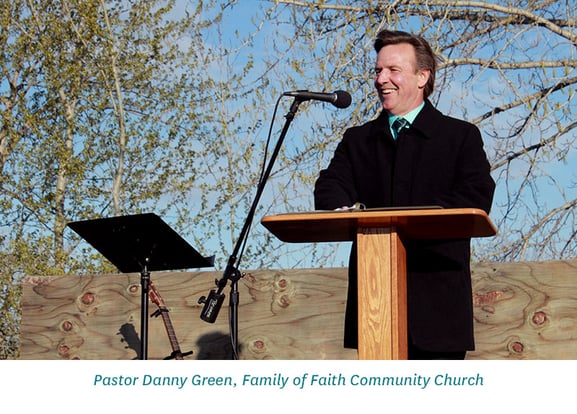 Jason only stayed at UGM for 120 days, but during that time, he met Pastor Danny Green and his wife, Sherry, from Family of Faith Church. Jason moved into a ROAR (Reaching Out Advocating Recovery) house operated by Family of Faith, and he stayed closely connected to the church: volunteering, worshipping, and eventually running men’s groups, heading up security and going to drug and alcohol treatment centers around town to find people who needed help.

Meanwhile, he was working hard to find permanent employment. Knowing he had a background in business, members of the church encouraged him to open his own store, but how does one do that with no capital?

Well, here’s how Jason did it: He scrounged together $600 from odd jobs and day labor to rent a little garage over on Euclid. People from church started giving him things to sell. “I was selling old ringer Maytag washers that were rusting away in people’s garages. I was selling little end tables that had three legs…It was a junk shop really.”

“It was extremely humbling. Somedays I’d sell forty or fifty dollars and yoohoo! I get to put money in my gas tank. I get to buy a burger.”

That little shop in the garage got shut down by the fire marshal, and Jason thought that was that. He’d given it a shot. But when he went to Pastor Danny and Sherry, they said, “You need to go get a business license and you need to find a place, because what you’re doing is working.”

“And I didn’t want to do it,” he says. “I really didn’t. I know what’s required to start up a business if you have vendors that will sell to you and if you have money in the bank and if you have a bank account.

“I didn’t have any of those things. I couldn’t open up a bank account. I’d burned every bridge in the industry, and it just seemed to me like it was pointless. This wasn’t going to work. It was going to be a failure. I was wasting my time and energy. But I’d committed to doing whatever Pastor Danny told me to even if I didn’t agree with it, because I wanted what he had.”

It didn’t happen overnight, and there were plenty of hurdles along the way, but eventually, Jason opened his first store. He even followed Pastor Danny’s advice in the naming of the business. “He told me I need to name it 16 Cents, 3 Shoes & 5 Socks because that’s the story and the testimony that I’ve been telling people at church. That really affected people and touched people, because a lot of people can relate to being down and out and not having a lot at some point in their life … . I thought he was crazy. I really did.”

When he handed in the paperwork for his business license, the woman at the counter was confused. “She read it like three times, and then she says it – ‘16 Cents, 3 Shoes & 5 Socks – what is that?!’ And so right then and there, I was able to share my testimony with her and what it meant. I started getting teared up, and I knew it was the smartest decision I had made up until that point in my life. Because I was able to share what God had done and what he’s doing…That’s what this business is about, talking about what the Lord has done in my life, and in turn, turning around and contributing to our community and hiring people that have a future now.”

Jason sees giving back as one of the main reasons for his business. He has 16 employees, many of whom have struggled in the past. Some have been homeless. Some have felony convictions. Some are in ongoing recovery.

“What we do here is we provide a very safe, clean-and-sober working environment that is God-focused. We pray before any gathering. We pray throughout the day. We’re not afraid to talk about Jesus. We accommodate these guys having to leave the job during the day to take care of commitments they have with Department of Corrections, probation officers, court dates, things like that. And we try our hardest to help them have a balanced life, because that’s a huge problem with recovering addicts. We’re overboard. We really struggle with balance.”

Jason also gives generously to UGM and other ministries who are serving the less fortunate, particularly the ministries that helped him. He’s hosted donation drives for practical needs like socks, toiletries and winter clothing, in addition to direct donations of what he does best – furniture – in response to specific needs at UGM shelters.

”I want to give back to those ministries because first off they’re preaching the gospel and they’re speaking life into these men and women’s lives: men and women who have been raised and living in addiction, in abusive relationships, who have been in and out of prison, who don’t know anything but that lifestyle…These ministries are reaching the people who need it most. They really do because it’s life or death.”

If you're a business owner like Jason, you know how important it is to connect with your community and make it a better one. Click below to give where you live and do business by partnering with UGM to help people get back to work.