Recovery: Reversing a Lifetime of Distrust

James Bureau’s childhood did not prepare him for life.

Or, it might be more accurate to say, James’ childhood prepared him perfectly for the life he lived for forty years—dealing and using drugs, womanizing, in and out of prison. 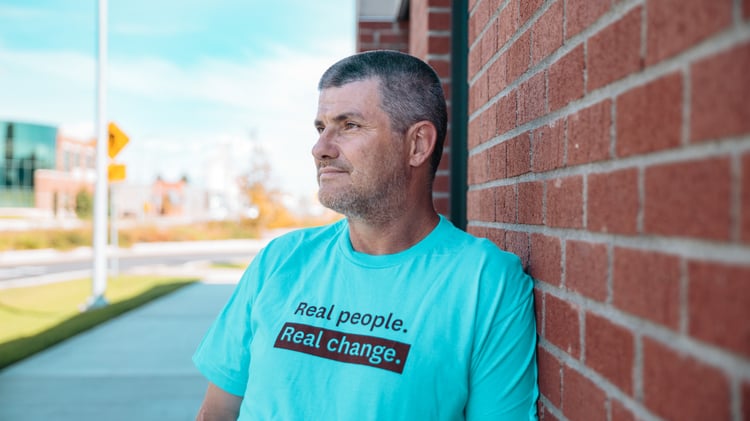 James’ dad left when he was two or three. He didn’t see him again until he was sixteen, and his dad had a new family by then. Meanwhile, he, his mom and his sister grew up in poverty, on government assistance with occasional aid from the local tribe.

“I grew up quite fast, you know. I had to take care of myself…and try to protect my sister. I missed out on the love, joy, happiness, of course.”

“My mom was with many men, anybody who could take care of her addiction. So we moved around a lot. I didn’t have many friends because I had to go from school to school to school.” The home was filled with alcohol and drug use. Alcohol led to violence, and the police were often called, sometimes by James himself. “It’s kind of hard not to call the cops when your mother’s getting beat up.” Conversely, drugs seemed to bring a measure of calm.

“I grew up, and I thought all kids did this, they put us to sleep smoking pot, and it kind of got us out of their hair, I guess, you know? It seemed normal to me. I thought everybody did that.

“When my mom and whoever she was with at that time were drinking, it was pretty violent, so I was scared of alcohol. I hated it. But when there was drugs around, it was pretty nice. It was quiet. It was happy times. And it made it to where I loved drugs, you know?”

That love of drugs only grew over time. When James became a dealer, his mom was proud of him. He was making good money. He could supply her. He had a party lifestyle and that fit right in with what he had always known. “I found my approval in drugs…I felt popular. I felt like I was needed.”

James was in and out of juvenile detention and eventually prison. He did ten years for drug-related activities—manufacturing, dealing, possession of stolen property. His relationship with the Department of Corrections was like a revolving door. “It wasn’t ‘if,’ it was ‘when’ I was gonna get caught, and I was okay with that. I did time well. Prison hardened me. It actually educated me in the drug game, in that lifestyle. I went in and came out with more connections... I wasn’t scared of it. That’s where all my friends were.”

“Prison hardened me. It actually educated me in the drug game, in that lifestyle. I went in and came out with more connections... I wasn’t scared of it. That’s where all my friends were.”

After years of this lifestyle, however, James started to feel tired of it. He was getting older and sensed that something had to change. “I can’t go back to prison,” he said to himself. “According to my revolving door, I should be back in prison. I’m too old to go back.” He started his quest for change by showing up at UGM.

MORE THAN A MEAL

“It was my first time homeless, living on the streets, trying to kick heroin, and I was using meth to do that. I was living in my car, and it was really hard to live in your car and be homeless, so I ended up losing my car; then I ended up camping, and it was cold.”

Cold and hungry, James came to UGM for a meal, and since he had been for dinner several times, he was asked to go to chapel. And that’s where James’ story takes a sharp turn. UGM Chaplain Ron Molina was up front, and inexplicably, James felt drawn to him.

“It’s hard to explain because I didn’t know Ron, and I’m definitely not the type of person to walk up to a ‘normal’ person to talk to them, you know? But I did, and it was a power greater than anything that convinced me to do that.”

James clarified why this was such a big deal. Back then, he had an aversion to anyone in authority. “I just wouldn’t talk to them because of all the things I’ve done, you know? I don’t know them. They don’t trust me. I don’t trust them. I didn’t think anyone would care about me. I didn’t have much trust. I mean, look at my background. I didn’t think that people could overlook what I’ve done. They would judge me.” 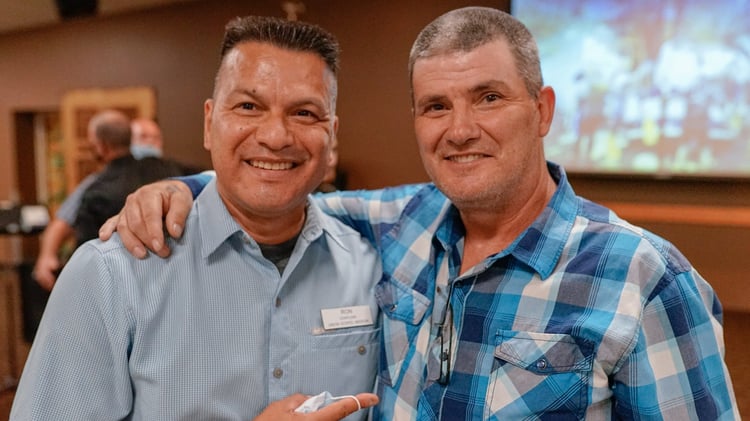 Nevertheless, James sought Ron out and asked to talk. The only words he could manage were, “I’m tired.” In the next few minutes, Ron introduced James to Jesus. “We were doing a prayer, and to this day, I couldn’t remember what I said, but I said it, and it was like a big weight lifted off my shoulders. And I was crying and that’s something I’ve never done.”

“...it was like a big weight lifted off my shoulders. And I was crying and that’s something I’ve  never done.”

The next steps were a little bumpy but further cemented James’ belief that a power greater than himself was at work. He failed a drug test and therefore could not stay at the UGM Men’s Shelter. Ron encouraged him to go to Truth Ministries until he could pass the test, but James said he couldn’t because he owed Truth money. Ron offered to take care of those charges and told James to come hang out at UGM during the day “because it wouldn’t be good for me to be out on the streets. I would have just started using again. So that’s what I did. I came over here, and I started volunteering, helping, just to stay busy. And a few days later, I passed my UA. And it wasn’t long after that, I was upstairs getting ready to go into Program. It was amazing, just amazing.”

James wouldn’t want you to think he changed overnight. Even with the Holy Spirit clearly at work, building trust took time. And trust was key to building relationships—with his counselor, with other men, with God.

“I remember Jerry told us, ‘You’ve got to have relationships. You’ve got to just get out of your shell and just go do it.’ When you join Program, at first they put your whole phase, all your brothers—well, they weren’t brothers at the time—but they just put all these men that I don’t even know into one dorm. Not your own room; it’s a dorm. And it’s confined. But Jerry said, get to know each other because if we don’t, it’s not going to work.

“I’m glad I listened to him at that point because I got really close with these guys. For real, I mean, if I needed a shoulder to cry on, Mike and Jessie were there for me. And I needed that, and they didn’t make fun of me. They were there. So, living close like that was necessary.

“The biggest difference in me is trust. I haven’t had relationships with other men. My dad wasn’t in my life. So having a counselor was challenging at first, but I love and respect Joe now. He is patient and smart. He listens to me, and I can trust what he says. And that opens up other relationships, especially with God.”

James learned that trust goes hand in hand with forgiveness. He felt so much shame. He was certain that, if people knew who he was and all that he had done, there was no way they could accept him. “Especially God, you know? He knows everything.”

Slowly, over time, through lived experience, James found that when he opened up, when he laid out all his secrets and past mistakes, he was not rejected. Not by his counselor. “Every day, I still got them hugs.” Not by his brothers. Not by God. “He’s the Father I never had...He forgives me of everything. And I was worried about that. All the stuff I’ve done. He brought me here, and he’s an amazing Father. And that’s the only Father I need.

James is being honored at the 2021 Commencement celebration next Tuesday, June 22. Click the link to see how to attend.