“It’s not like I’m doing anything special, because I love it so much.”

Ask Jenny Gasperino why she volunteers at the Union Gospel Mission, and you’ll always get a humble answer like this. She calls her work at the Crisis Shelter for Women & Children part of her “addiction to UGM.”

“I love to ‘love on’ broken women. I feel like I’m totally where I’m supposed to be.”

And while “addiction” might be too strong a word, it isn’t far off the truth. If she didn’t have other responsibilities, Jenny would be at the Crisis Shelter even more than three days a week. But she says she’s even grown in her roles as a wife and mother because of her time at the shelter.

She’s learned a lot about accountability, about boundaries. She’s also learned about God’s grace and how he’s created and blessed her in a unique way.

“It’s really helped me grow. … It helps me be a better mom and more understanding and overall just wanting to be a better person. And I get fed here. It's like church. Being able to love on people that need it helps me grow, and I love it.  I just love it.”

Jenny was recognized last fall as UGM’s 2018 Albert Arend Award winner. Each year, one of our approximately 500 regular volunteers is chosen to receive this award for exceptional service and commitment to the cause, and Jenny is a prime example of both.

She first got involved at the Crisis Shelter right before it moved to the new facility in 2016. She helped with transporting meals and getting residents their bedding and other necessities. At the new facility, Jenny’s role has grown. In addition to working at the guest services desk, the first and primary point of contact with residents, she also trains resident workers and other volunteers in the responsibilities in that vital position. 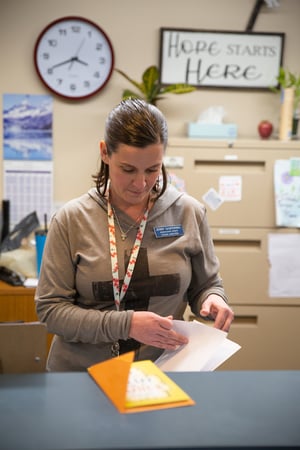 invest in her to build her role at the shelter.

“I’m so very thankful for [Karen]. She is amazing in leadership and building that up. I’m very excited to see what my role will be down the road.”

Jenny intends for that road to be long. She’s only 42, but she already calls herself a “lifer.” She foresees working at the shelter even more once her daughter Macie, now 9, reaches adulthood.

Meanwhile, Macie often comes with her mom to the shelter and sees Jenny living out her love for Jesus by showing his love and compassion to women who have reached their lowest point.

Grateful and giving Back

Giving that example to her daughter is important to Jenny because she grew up in a troubled home. While those memories are painful, now she has more compassion on her own mother and the women she meets at the shelter who have the same struggles.

“My mom was a single parent and she tried her best.  … She was angry, and she did her best as a single mom.”

Jenny moved out in her late teens and fended for herself. “I just survived out there. I worked, thankfully. That was my saving grace, so I never got into drugs or anything. But I did hang out with drug dealers.”

In fact, now she sees she was “so close” to ending up needing something like the Crisis Shelter, but God protected her from many of the pitfalls of “just surviving.”  A customer she met at her bartending job got her back to going to church, which her grandmother had encouraged as she was growing up. And her relationship with Jesus only grew as she became a wife and a mom. And she wanted to share the gospel to help others where she and her mom used to be.

“I can't do it without Him. Trying to teach people [at the Crisis Shelter] the emptiness and void inside is Him and nothing can fill it, like no man or food or drugs or shopping.  Nothing can fill it but Him.”

For a few years, Jenny served in a Moses Lake ministry that coordinated churches to meet needs for people in crisis. But, “I didn’t have really good boundaries … You could help people outside of it. Like here, you can’t fraternize with guests [outside UGM], and there I would take on people and I would take on their troubles, so then I got compassion fatigue.”

In 2016, when Jenny and her husband decided to move back to Spokane, she was apprehensive about living in a place where she had many bad memories. But she knew she wanted to volunteer to help people in need. Within a few months, she came to a UGM volunteer orientation and was instantly “hooked on UGM.”

Why does Jenny love UGM so much? In a few words, she loves the environment of compassion, accountability and transformation. She’s learned that loving the residents doesn’t mean doing everything for them, but rather showing them how to do things for themselves: “We're not doing this because we want to control you, it's because we love you and we're investing in you and we see potential in you that you can't see in yourself right now.”

It’s still hard to leave the choice to each individual to take their own steps forward.

“You just want to give people a glimpse of what life can be like … I wish I had that power to be able to show them what you can have if you do the work. … Sometimes they just feel so hopeless, like it's so much work, and it is a lot of work. … When you're at rock-bottom, it's a lot.  But it's so worth it.”

She recalls one resident who came in who had never been at a shelter before, but whose life was in shambles because of her addiction. “She was a hot mess,  like she was crying, and I was like, ‘OK, she’s not going to make it here, she’s not going to last.’ And now nine months later, she’s grown so much.” That resident secured a job, is healing her family and is filled with the joy of Jesus.

Those miracles of transformation and the many “God moments” she sees from day to day are what keep Jenny hooked. “That’s my favorite part, to see them so vulnerable and scared like a child, like ‘I need my blanket,’ and ‘I need this.’ They’re used to surviving. And being able to give them hope.”

Residents have also helped Jenny grow personally. One time, when Jenny was complaining about her less-than-ideal relationship with her dad’s family and how she dreaded the chore of taking her grandma shopping, a resident said, “You know what, Jenny? You should be thankful that you still have your grandma.”

Jenny took those words to heart and started focusing on the privilege of spending time with her grandma, knowing that even imperfect family relationships are a blessing many people don’t have.

Even her mom has benefited from Jenny’s service. “Her seeing the growth and change in me has encouraged her, too.” Jenny’s mom is now part of North Church and working in their Serve Spokane ministry.

Jenny is currently working on getting more involved in community engagement for UGM because, as she puts it, “I could sell UGM.”

“I love UGM so much. I can't even explain, like it makes my heart happy.  I just love being able to tell people about it.  I love getting them excited about it.”

So she shares UGM updates at her church and with her neighbors. When the shelter runs low on underwear, she lets her running group know: “I’m going on a panty run, anyone want to contribute?” And because she’s genuinely passionate about providing hope for the homeless, more often than not she gets others on board.

Jenny realizes not everyone has the time and freedom to do what she loves so much. That only increases her gratitude for her family, for her husband’s provision, for the ministry God has given her.

“When I think about it, I don't deserve the life that I'm living.  I'm so grateful and thankful for it, but when I look at my past, like I have no clue why I get this life.  But to be able to volunteer for a living at the age of 42 is super-special and amazing, and so I'm really glad that I found this organization to be able to give my time.”

You don’t have to be “addicted” to UGM to make an impact like Jenny does! Sign up for a volunteer orientation to find out how you can get involved.