“I was brought up in a family of musicians and my dad was the smartest man I’ve ever known, a philosopher.”

Johanna is well spoken, educated and artistic. At first look, she defies the stereotype of the traumatized adult turning to drugs to avoid pain or loneliness.

However, under the surface, she was breaking. “I was not treated well at school. At all. I was ostracized. They made up games against me. ‘Johanna germs, no returns, guaranteed to give you worms.’ Practical jokes, bullying. It wasn’t fun.”

“I was not treated well at school. At all. I was ostracized.”

She says she told her siblings of the abuse she was experiencing—avoiding telling her parents the details for fear they would see her the way her abusers saw her. Only now can she see that her siblings were too young to understand the significance of the abuse. She was being torn apart at school, trained to believe she was worthless. 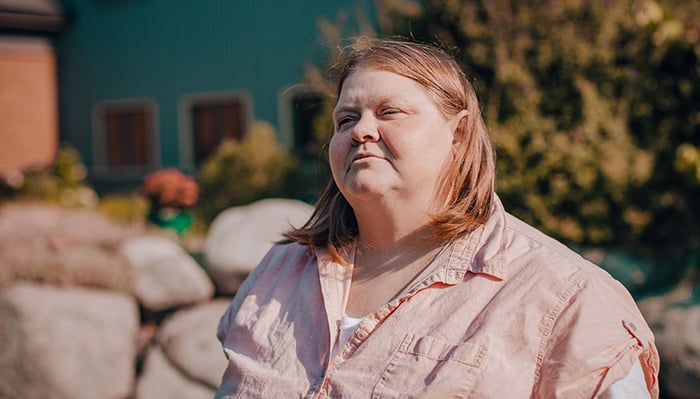 The wounds went deep. Fast. By high school, she says, her mind was so wired to believe she was hated by her peers, that she did not know how to make healthy friendships at all. “I constantly was thinking that people were talking about me. I’d meet somebody and I’d either just cling to them and suffocate them, or I’d always be thinking that they were talking behind my back. So I got very codependent.”

Everything changed when she started going to bars and drinking at age 24. “I was a hit. People liked me when I was drunk, so I kept going. I had just lived with this craving for love and belonging and here I felt like I was getting it.”

“I was a hit. People liked me when
I was drunk, so I kept going.”

At this point, she pulled herself together into what appeared to be a normal life, climbing the ranks from crew member to mid-management at a fast food chain. However, her unhealed trauma kept triggering in relationships at her workplace and, to cope, she drank harder and pursued stronger substances.

In short order, she progressed from alcohol to coke, and from coke to pills, and from pills to meth and opiates. “And from there I went straight to heroin.”

She had experimented with heroin when she was young, but it didn’t stick. She returned to it when she was fired. “I’m pretty sure I went into shock, PTSD from that moment. I remember specifically, it's still perfectly vivid: the conversation, who I was with, the way I was thinking, ‘This is not happening, I must be in a nightmare.' After I got fired, I really went downhill. I lost my house, I started couch surfing, I was using every day.”

Soon, Johanna was living on the streets. “I found a doorway that was good to sleep under, the SNAP office in Spokane. They were kind and would give you warning before kicking you out. I remember waking up to them walking over me and they were saying, ‘You don’t need to wake up yet, but we’ll be open soon.’”

“I found a doorway that was good to sleep under, the SNAP office in Spokane. They were kind and would give you warning before kicking you out.”

Over the course of two hard years, she slept on dumped mattresses in alleyways, in trap houses with user friends, on sidewalks. Once, when she was sick, she walked all the way down East Sprague to the old UGM Crisis Shelter, but it was empty, being turned into the Student Impact Center. “I was so sick that night. At that point, I just decided not even to try anything else and just give up.” 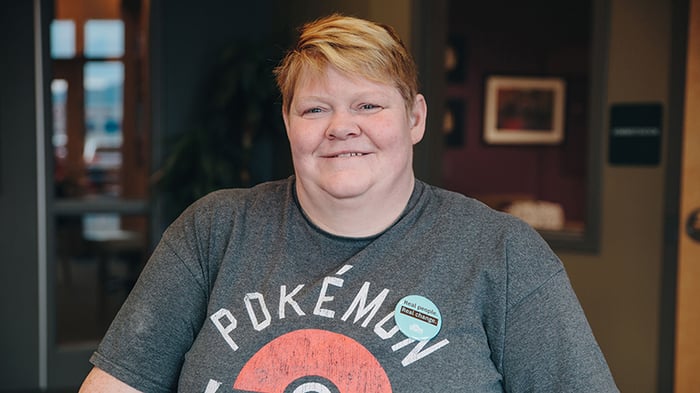 But a day or two later, somebody told her that the Crisis Shelter had moved to a newer and larger building just a few blocks north. Anxious for a warm bed and a meal, but knowing UGM’s clean and sober policy, Johanna stopped using heroin that day and tried using meth to ease the withdrawals. “It’s a good thing I only ever smoked it. If I’d used a needle, the withdrawals would have been 100 times worse.”

As soon as she thought she could pass a UA, she walked to the shelter and rang the bell. “All I had, my whole life at that point, was in the layers of my clothing. I don’t remember, but maybe I had a grocery bag of stuff, but if so, it wasn’t much.”

“All I had, my whole life at that point, was in the layers of my clothing.”

Johanna didn’t know about UGM Recovery. She didn’t come to stay; she came to get relief from the harshness of life on the streets. “But it was that same day that I started to feel hope. They prayed with me and they asked me questions. It wasn’t like they were just checking boxes with me; they wanted me to know I was safe.”

After a shower and after handing over all of her belongings to be sterilized in the 120-degree hot box, she was given a room and shown to the kitchen where they pulled out one of the meals left over from dinner. She was clean and properly fed for the first time in years.

“They don’t make you go to Chapel the first night. Other nights, they do, but not that first night. And I definitely wasn’t thinking about God at all, except for blaming Him and everyone else for my lot in life. But I didn’t have anything else to do, so I figured, ‘Why not?’ So, I walked in and, overhead, there’s a video of one of my favorite hymns, How Great Thou Art. But the kicker is, it was by Stickyard, an all-percussion band that I love. And I’m a drummer. I instantly started crying. I knew that God was saying, ‘You’re in the right spot. You’re safe, you’re loved, you’re seen.’ That is my 'come back to God' moment. It was all uphill from there.”

Johanna entered Recovery and transferred to the Center for Women and Children in Coeur d’Alene where she was quickly surrounded by women who loved her and supported every aspect of her healing journey. “They've helped specifically with the codependency issues. Because now that I’m not using drugs or people to make me feel like I’m worth something, I’m catching myself where I could be getting clingy or not trusting enough, when I’m wanting to have someone in my life and not letting it happen organically, God’s way. Trying too hard for it, or not trusting that they’re going to stay.” 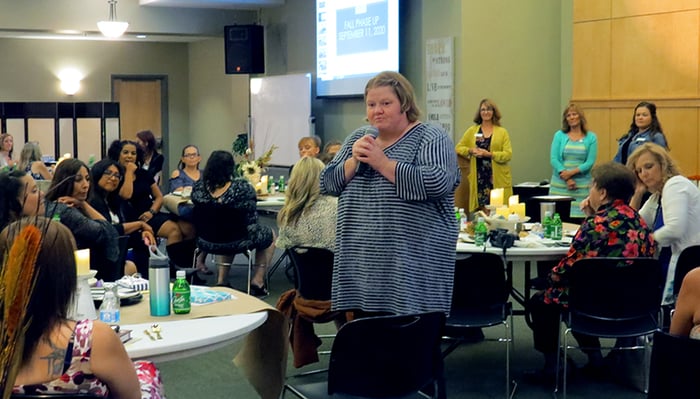 The heart of her recovery has been healing the belief that she is unacceptable.

“I saw that most of my overreactions happened regarding kitchen stuff, because of work—feeling like I’m not good enough—so if I do happen to have a moment in the kitchen, realizing where that situation may have happened the first time, and walking through it in my head, I’m able to see the truth about that moment and avoid overreacting. It’s called the 'road to the wound', you walk through it again and again and it becomes duller and duller so that when something like this happens, it’s just a random moment, it’s not so attached. So when somebody says, “Hey, you missed a spot on the table,” it’s not my old boss who threw a chair at me, it’s just this person saying, “Hey, you missed a spot.”

Johanna’s recovery from alcohol, pills, meth and heroin has really been a recovery from trauma. Through counseling, community and a lot of practice, she has been able to prove to herself that what she experienced when she was young does not define her. It was not the truth.

Without the need to hide from her pain, she’s been able to stay clean and sober for three and a half years as of this publication. “I was using drugs when I felt attacked or alone or separate, when I didn’t feel worthy, but now I’m learning to spot those moments, identify them, and grab the gospel. Instead of, ‘Everybody always leaves me, nobody loves me,’ it’s God’s Word says, ‘I will never leave you nor forsake you. I am always with you.’ God keeps my tears in a jar. I am beautifully and wonderfully made.”

“I was using drugs when I felt attacked or alone or separate, when I didn’t feel worthy, but now I’m learning to spot those moments, identify them, and grab the gospel.” 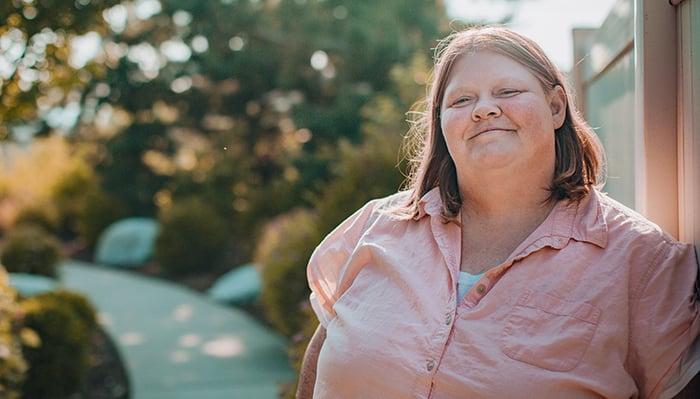 Johanna says that her family has “stepped up to the plate” since she entered program and they have come alongside her in her recovery. “My sister, my brothers and their wives. I don’t think I’ve ever had a better relationship with my family until now. They've wrapped their arms around me. And my mom too.” (Unfortunately, her father passed away several years ago.) “My sister is a therapist in Seattle, so while I was going through program, I’d be texting my sister and telling her all about boundaries and she’d be like, ‘I’m learning about boundaries too!’ We didn’t have boundaries when we were growing up. It was an open door policy and I think that made it hard for me to say no when people would abuse me. So, we’re learning together. And I’m so grateful.”

Today, Johanna lives in UGM’s supportive housing. It’s the first time she’s ever had a place of her own and she grins talking about it. She was hired at the company where she did her four-month business practicum, and she wakes up every day knowing that she is worthy of love, surrounded by friends, and that she has something to offer: her beautiful, insightful, creative and philosophical self.

Real change is happening all across the Inland Northwest. Watch these short videos and see for yourself.

The Polarizing Topic of Homelessness [and the hot spot in the middle]
Radical Hospitality: Food as Grace
Business Owners vs. the Unhoused: A False Dichotomy
The Government Agrees: "Housing First" isn't Working