“This is literally our home. And three times a week, we invite 12 to 20 high-schoolers in.”

That’s a succinct way to describe Impact Nights at the UGM Student Impact Center. On Monday, Wednesday and Friday after school, a bunch of local teenagers show up to spend the afternoon with the resident interns at the Impact Center.

The teens aren’t church kids coming to youth group – they’re homeless, or coming from broken/unstable homes, or identified by teachers or counselors as headed in an unhealthy direction.

They’re exactly the ones the Jesus-loving, service-minded college students who live at the Impact Center want to show up. But they’re not there to put the kids through some kind of rigid program to make them shape up. They’re there to provide a family.

First, they’ll help with homework, talk with the kids and help get them any resources they might need. Then they all sit down to a family dinner around a huge dining table. In the evening, they'll have activities or discussion topics designed to engage the kids individually. 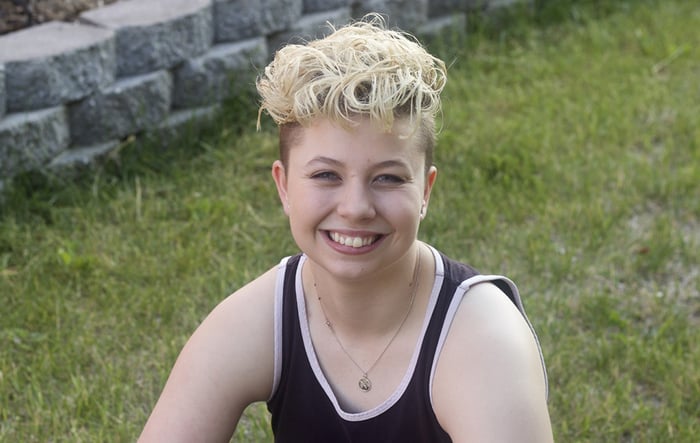 December Eddy is one of the interns who runs Impact Nights. Other interns work with Young Club, Juvenile Detention, UGM Camp and other ministries, but December’s been “on duty” for Impact on Mondays and Wednesdays this school year. Sometimes she’s the one who cooks the meal, sometimes she’s on the van crew that picks up and drops off the kids, sometimes she leads discussions or just hangs out and plays with them.

She’s learned to expect the unexpected and always remember to love the kids.

Relationships can’t be scheduled, but they happen when you're consistent.

December will be honest with you: Some nights are not good nights – kids are loud, disruptive or glued to their phones. “Depends on who’s here, and how much caffeine they’ve had, and what they did at school that day.”

But some nights they’re really into whatever activities the interns have planned – or something else entirely comes up. December has learned she needs to be ready to answer tough questions about anything, from demons to sexual purity.

“It’s definitely made me grow in some ways, even just reading the Bible more carefully. When the kids have questions I can’t answer, I’ve got to go find the answer.”

And not every interaction has to be that deep to be meaningful to one of the kids. One time, December helped one of the boys learn to tie a necktie.

“It was really, really fun. We finished, and he did it, and it was kind of done, and he got so excited: ‘I tied my tie!’ and he ran out to show everyone.”

And because they’re literally meeting in the interns’ home, they can graciously help the kids learn  to treat the “family” and the building with respect, and to be thankful for what they receive. 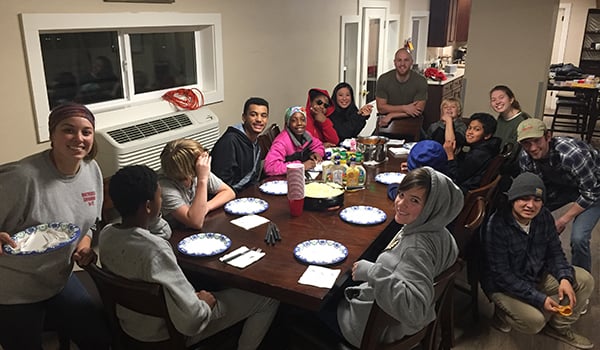 They don’t promise gourmet meals, but the interns work with food donations to provide a variety of home cooking: chili, chicken and waffles, taco soup, etc. Even on the occasional off day, the meal is take-it-or-leave-it in the true family style: “If we make something we don’t like, we’re like, ‘We don’t care, you’re going to eat it anyway. This is a home and that’s the rule.’ ”

Most importantly, December and the other interns focus on being the consistent, engaged adults the kids need in their lives.

“They need so much love right now. And we’re trying to speak that every single night … I know that some of them don’t get that at home, and we recognize that when they come here. So paying attention to all of the kids and actively engaging every kid.”

Consistently doing that ends up opening up a world of connections.

“A lot of the kids we know are so hungry, but they’re not quite sure what they’re looking for yet. So when we get to sit down and have one-on-one conversations or do a small group with them, they can just rapid-fire theology questions for an hour.”

#2: Recognize and include everyone’s unique gifts.

December is an audio engineering student at Spokane Falls Community College, but students from Eastern Washington University, Whitworth, Gonzaga and Moody Aviation are also part of the Impact team, with a variety of backgrounds, majors and career goals.

Likewise, each one of the kids they serve is created by God with unique gifts and qualities. At Impact Nights, there are opportunities for everyone to contribute. 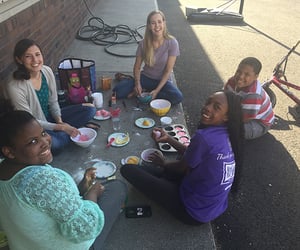 Even the Center’s resource co-op, which offers high-quality clothing and other items, requires the kids to be willing to serve the family rather than just receive things for free. They get a punch card to collect credits for helping with various chores; that way, kids can have the satisfaction of earning something and contributing, knowing they have something valuable to give. (This principle applies across UGM!)

December also prefers more active roles, cooking dinner or leading activities, but she appreciates her teammates who just sit and give a listening ear – something many of the teenagers desperately need.

“I mean, those kids can talk. … That’s why it’s so important that there’s so many different people here. I have a really hard time sitting and listening…. There are people who are just like, ‘I want to listen to you talk for an hour.’ And I’m like, ‘Sweet, you do that. We’re going to go play kickball.’ ”

In the end, it’s a blessing to be a part of a close-knit group with the same end goals – a family.

“We just want to love on the kids and make sure they’re doing OK. When you’re in that environment with so many different people who have the same goal as you, it just feels really good.”

#3: Understand the story behind the behavior.

You can’t serve some of the neediest teenagers in town week after week without your mindset changing.

For December, that change is “viewing people a little more compassionately. Because I was a church kid. I went to Sunday school and stuff. I remember the kids who acted like these kids do, and I remember not liking them. … Now that I get to work with those kids and know where they’re coming from, it’s a little easier to understand. Definitely looking at things from a much broader viewpoint: We don’t know everything that’s going on, and it’s not our job to judge anyway.”

That compassion, and their growing affection for the kids, has its toll. It’s really hard for December and the other interns to not be able to fix many of the problems the kids are facing. Because the Center isn’t equipped to offer overnight shelter for youth, saying goodbye after Impact can be heartbreaking.

With one of their students, “Every night we had to drop him off on a different street corner because he didn’t have a place to live. He wouldn’t go to a shelter. Every night he would tell us where his friends were going to be and we would drop him off there. And it was during the winter.”

Remembering the sobering facts about what they’re going through helps December and her fellow Impact team members have patience with the kids and continue to rely on God to help them love, then love more, and then love even more – because the need is too much for them to fill on their own.

“It’s 100% a God thing all the time. ’Cause when it’s not, you can tell it’s not. Like there are some times when you can tell that I’m trying to do it on my own, and then I’m just grumpy and tired and the kids have to stay out of the kitchen. It’s just really important that He’s a part of everything we do here.”

With Impact Nights continuing through the summer, December is grateful to have another few months to interact with the kids after school’s out. Even so, it will be hard to leave when her internship is up in August.

But she’s excited to see the Impact Center, which is barely 2 years open, continue to grow in its unique way of reaching kids with family-style relationships, showing “how much we care, and how much Jesus cares.” With every conversation, every meal, every game of kickball, the message is sent: “You’re loved.”

You too can be a vessel to show God's love to children by volunteering in Youth Outreach!

From Crisis to Creativity: How the Pandemic Has Impacted the Future of UGM Youth Outreach
Checking in With Youth Outreach
Kellie: helping kids win at life
UGM Camp: God Answers Simple Prayers