The Five C's of Children's Recovery

“Stay consistent in their lives, even when they’re the hardest to love.”

That, in a nutshell, is the key to caring for the children living with their moms in recovery at Anna Ogden Hall. Children’s Program coordinator Shannon Behrens recognizes that while their moms are the ones who choose to come into the Women’s Recovery Program to deal with their own problems, the children have also suffered and need particular care.

Addressing their needs takes intentional efforts from Shannon and the rest of the staff and volunteers in the Children’s Program. And while the program is highly individualized to match the needs of each child, there are a few common values that apply to healing children who already have been through enough trauma and hardship for a lifetime.

Many of the children who come into Anna Ogden Hall have had their entire lives filled with chaos: abandonment, abrupt separations, transfers from foster home to foster home, neglect, insecurity.

At first, Anna Ogden Hall looks to them like just another temporary home, and so they resist forming attachments with anyone. Why get close if they’re just going to be abandoned or taken away at any time?

Shannon describes a 2-year-old girl who came to Anna Ogden Hall when her mom regained custody after a long separation. The girl cried and screamed constantly.

“Her environment before was a lot of yelling and a lot of chaos. And she didn’t know how to interact with the environment that’s here, that’s safe and calm.”

The key to helping this girl wasn’t complicated, but it would take time and consistency. With Shannon’s coaching, the mother learned how to meet her daughter’s need: “That was just a lot of being with her. Playing with her with toys, or just reading to her. Just learning how to have that relationship with her, rather than just being on the go.”

It took three or four weeks of practicing these simple reassurances for the little girl to settle down and feel secure in her new home.

That need for consistency is why there’s a high commitment bar for volunteers in the Children’s Program – and why we’re so thankful to have 26 people currently willing to make that commitment.

“We ask our volunteers to devote one full year to our program,” Shannon says, because there aren’t any shortcuts for building trust. It takes time, it takes integrity. It takes showing up every week.

The same chaos that makes children crave consistency also creates gaps in their understanding of what’s happened to them. Their parents may have left unexpectedly or gone to jail; they may have been taken away from their homes and placed in foster care; their parents may break up and they never see one of them anymore. A lot of things in their lives have ended abruptly and were never explained or even addressed by the adults.

Unresolved hurts and feelings of abandonment ensue, and again kids learn to keep people at arm’s length so they won’t go through that again.

“So many of these kids have had no closure. People just decide not to come back.” When somebody leaves without any warning, “that is really devastating to them.”

That’s why when a volunteer does leave the program, Shannon always tries to make it an event: take pictures, make cards, and give the children a chance to understand and picture where that person is going. They create a positive memory rather than another unresolved question.

She also encourages moms to have honest conversations with their kids when people leave – “letting them know that they didn’t just leave here and disappear.” 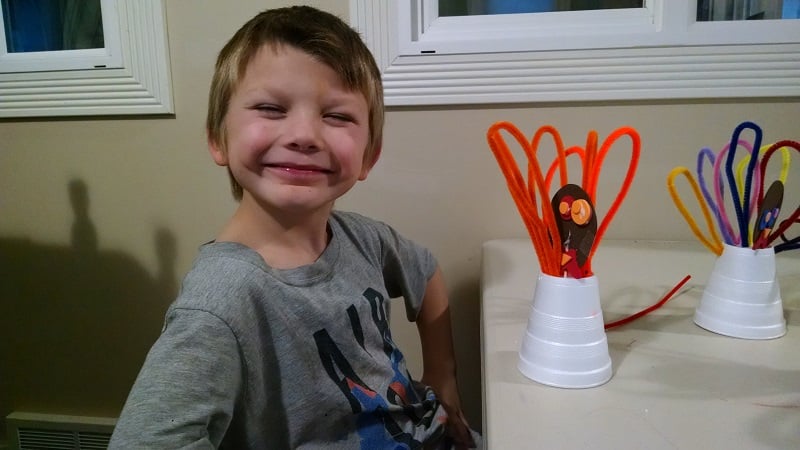 Healthy communication and conflict resolution are something moms and kids learn about together at Anna Ogden Hall. Like the 2-year-old girl who just needed her mom to “be” with her, families who haven’t had consistency in their lives need to learn healthy ways to express themselves and understand one another’s needs. 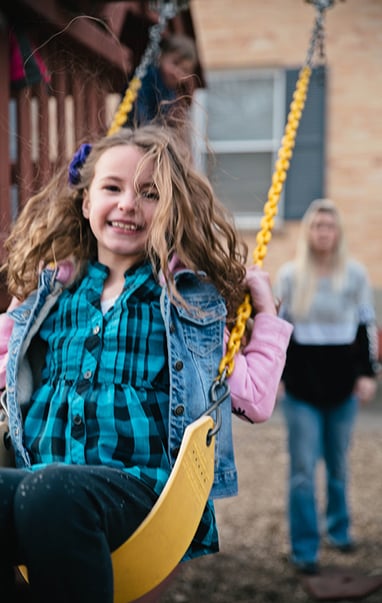 In one example, an overblown argument erupted between a mom and daughter when the daughter didn’t clean up a game she was playing quickly enough. Her mom thought the girl was just being rebellious, while the girl thought her mom was being unreasonable.

Once everyone had calmed down, Shannon sat down with them to communicate their perspectives without interruption. The girl was able to see how her demeanor had communicated disrespect to her mom. On the other hand, when the mom learned that the game the girl was playing takes longer to put away than she realized, she agreed to give her daughter more warning in the future about when it needed to be cleaned up. Since then, they haven’t had any problems in that area.

For children who have been mostly ignored or yelled at, actually being listened to can be unfamiliar territory. Likewise, many of their moms come from dysfunctional families themselves and have never seen healthy parenting demonstrated. So it takes practice to learn a new way to relate to each other. Shannon meets with each mom once a week to help them deal with issues that come up, modeling things like the calm “mom voice” and role-playing conversations with their kids.

The Children’s Program creates opportunities for kids to make real choices, even if it’s as simple as choosing the day’s activities. “We have our curriculum set, and it’s basically pretty standardized, but we are also flexible. What is really exciting for the kids right now? Yesterday they were wanting to do a science experiment, so we said, ‘Let’s create it. Let’s do this today.’” 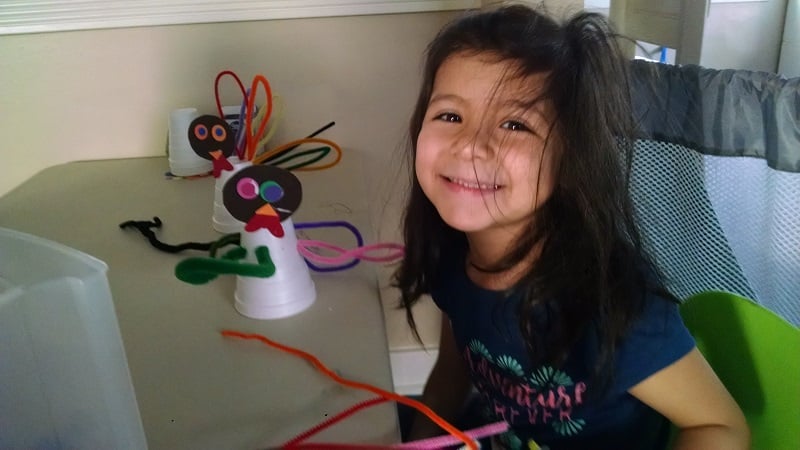 Choice is closely related to control – the sense of having power to influence our environment. Power and control constitute one of every human’s basic needs, regardless of age.

Shannon teaches principles of Love and Logic to help moms figure out healthy ways to fill their child’s need for power and control. That looks different from child to child and from age group to age group, and it helps replace chaos and drama with consistency and clear choices for the kids.

For many moms at Anna Ogden Hall, “knee-jerk parenting” – reacting to their kids’ behavior out of annoyance, anger, or fear – is the only way they’ve ever known. So Shannon works with the moms and kids together to determine ahead of time – when nobody’s “in trouble” – what the consequences will be for improper behavior and rule-breaking.

Determining their own consequences helps children see deeper meaning in their choices and gain a sense of control over what happens to them. And Shannon says the kids do a better job of it than you might think.

“Kids, they can be quite fair to themselves, sometimes a little too strict in my opinion.”

One of the most difficult things for Shannon and her staff is when a mom abruptly chooses to leave the program, pulling her kids out as well. That hurts adults and children alike.

“Our volunteers get really attached to the kids because we’re working with them. And we’ve developed those relationships, and they view us as safe people. … They rely on us. So when moms leave, it’s never their choice.”

Regardless of the choices moms and kids make that can be hurtful and disappointing, Shannon and her team focus on what they can always do, in every situation: Love them.

There are limitless ways to do that, but the primary way is to reach out and connect. “Relationships get built. It’s probably the one most impactful thing I have seen break down walls in children.”

The good news is it doesn’t take special skills to do that. You just need to show up.

Like Dan. Dan has volunteered in the program for 7 years. Physically, he has limitations – he’s on oxygen. But, “he does so much with our kids. They absolutely get so much out of him, whether it’s a conversation during snack time or he’s bringing something very simple for them to do, they are just thrilled with what he’s bringing.” 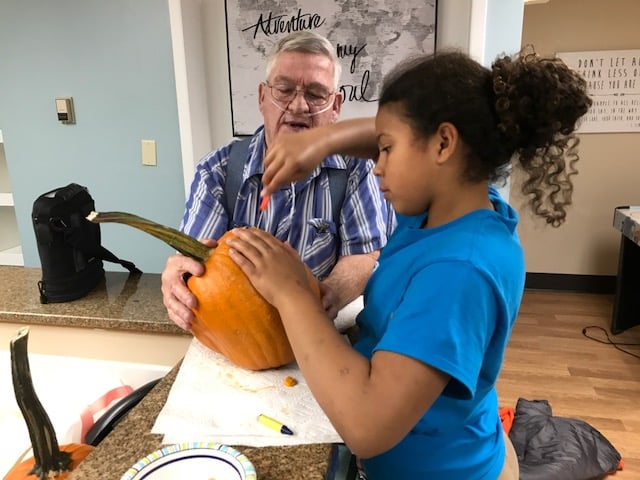 That quality time teaches kids that “there’s hope out there. That there are good, healthy men out there. There are good, healthy women out there who just want to love me because I’m me. Not because I’m going to do something for them, or that I’m anything other than just an annoying person to be around. That’s a lot of their feelings inside, and so when somebody comes and wants to just spend an hour and a half and play basketball, that really ministers to them. It lets them know that they’re important and that they’re special. And they need that.”

A connection with Jesus is the most important one they make. From daily Bible study to singing songs, each day the children are exposed to the gospel. And it makes a huge difference.

Shannon recalls how one boy would literally scream and hold his hands over his ears whenever they would pray or sing, saying he hated Jesus and God. But as they consistently prayed for him and loved him, he drastically transformed.

“All of the sudden, he was like, I want to pray. Can I pray? … And if we were singing songs, he was singing the loudest and leading the other kids on.”

The boy’s favorite story was David and Goliath, and he always wanted to pretend to be David and lead all the other kids to go out and get Goliath. “It was so symbolic, because thinking about him and being this little person, and all the Goliaths that are in his life that are trying to destroy what God is doing, and he is just going after them. Unfortunately, his mom pulled him out, and that was really hard. But we’re just going to keep praying for him and know that we planted seeds that were never there before.”

Shannon’s prayer list gets longer with each child who comes into the program. And not just her own list. The children “become family when they’re here together. It’s like they’re sisters and brothers. They are always together; they view each other as siblings.”

One little girl who used to be in the program with her mom still walks by on her way home from school. “She’ll jump up at the windows to look for people. And whenever we see her, we all go running out and say, ‘Give us a hug.’ Just letting her know … we love you. We’re praying for you. We want you to know that God loves you too.”

The Children’s Programs at UGM can always use volunteers! If you want to make a difference just by showing up, click here to sign up for a volunteer orientation.

Troubled Kid to Child of God: Jesse’s Story
Voices of Recovery: A Poem of Redemption
Mentoring Through Recovery and Relapse
"I'm Thankful for My Rocky Past": Thoughts on Gratitude from Shelter Guests
Bikes and Budget Advice: A UGM Volunteer Feature