Clai, who works in the kitchen at the UGM Men’s Shelter, has come to have a deep and dynamic relationship with God. God has placed him in a job in which his faith is being strengthened, his hard-earned culinary skills are being used, and sometimes even to his surprise, he is daily encouraging and ministering to men who have walked through the same kinds of experiences he has gone through. But, like many of the people who become part of the community at UGM, his story began in difficult circumstances. His faith journey is more of a wandering road than a straight path leading to redemption. 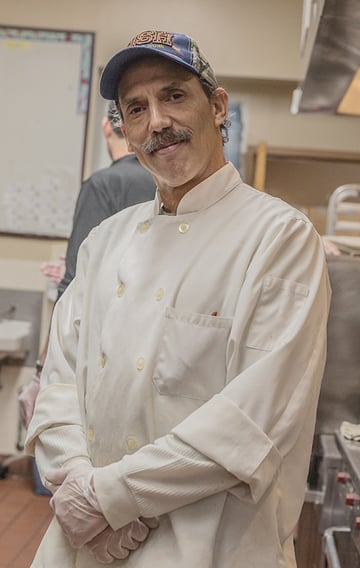 God has gradually directed his life in quiet moments of solitude, or in big demonstrations of presence.  Clai battled an addiction to cocaine, suffered homelessness throughout his teen years, survived Juvenile Detention, as well as two stints in jail, and worked in the hard-living restaurant industry. Still, God has continued to show up in his life, and Clai never lost his faith.

Clai spent parts of his childhood in a neighborhood called Del Paso Heights in Sacramento, California. If you’ve never heard of Del Paso Heights, it has a history of catching media attention for all the wrong reasons. Crime, drugs, homelessness, violence, poverty, racial tensions, and gang activity are an ever-present backdrop to the daily experiences of residents.

His family wasn’t perfect either. Clai’s father was out of the picture by the time he was in elementary school, and although his mother was intelligent, creative, and passed on her love of art and writing to Clai, she struggled with her own wounds and her own addiction.

“My mother's a hippie. She was a beatnik in the '50s, hippie in the 60's, a feminist in the '70s, a yuppie in the '80s, I mean, my mom's endured all of it you know… drugs were always in the home. Mostly marijuana, but my mom's dabbled in a little of everything. Her big struggle was alcoholism… [She was] a single parent, and she had two little brown-skinned boys that were pretty rough kids. “

Things didn’t get much better for Clai when the family moved to Spokane in 1971. “There was nothing here in Spokane in '71, I mean absolutely nothing. So as a young person, this town [was awful] 'cause there was just nothing to do. I mean, we were too young to hunt and fish, so our thing was crime, and we did a lot of that….”

According to Clai, because of experiences his mother endured, she was fearful that her boys, like their father, would grow up to be abusive to women. When Clai and his younger brother Matthew got mixed up with petty theft and drugs, his mother’s interpretation of a zero-tolerance policy was to kick them out to live on the streets. “I pretty much spent ten years… my teenage years homeless because she wasn't going to deal with it, you know, she didn't know how to communicate…”

By 18, Clai was in jail for the first time. It was different than juvenile detention. He was depressed and even suicidal when his cellmate asked him to take a walk to the chapel— just to get out of their cell for a while. In the chapel, Clai says, “There was like five huge banquet tables full of literature, right? Books of all sorts. And I’m running through it really quick and I find one Bible that was The Good News for Modern Man. I didn’t read it, but there were lots of pictures in there.” Clai copied the drawings in the Bible and used them as wallpaper for his cell. He had been introduced to Christ at 12 through a friend’s family, and even though he didn’t understand God or Christianity fully at the time, he said the drawings got him through his six-month sentence.

It would be so convenient as a writer (or even a Christian) if Clai, after finding an illustrated Bible became sober and rejected the world of crime and drugs to turn his life around as soon as he got out of jail, but that is not Clai’s story. Not  at that time in his life at least.

Within a year of his release, Clai went to live in a Christian halfway house, promptly relapsed, and then went back to jail. He assumed he’d be there for a while, so his first step was to find another copy of The Good News for Modern Man. Sure enough, he found a copy in the chapel, but he was astonished when he opened it up. “I opened up the opening page and my name was in it.”

At first, he was angry, thinking the priest in the chapel was trying to manipulate him. “I just lost it man! I asked, ‘Where’d you get this? And how do you know me?’ And [the priest said], ‘Son, God is talking to you.’” Clai said that moment was a turning point. Before that, he had never felt God.

“There’s only two ways to treat people: we’re either going to help them or hurt them. And so, how am I helping today? I can come to help or hurt, and I want to help…This is the first job I’ve ever had where I’m excited to come to work.” 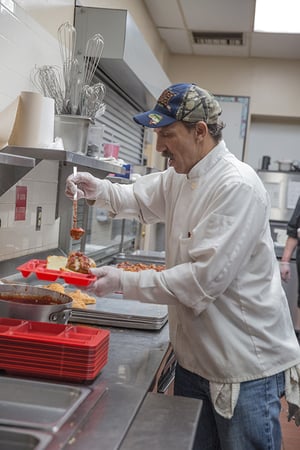 “So after jail at 19, I decided, OK, what am I going to do? Am I going to continue to run and gun and do drugs and crime and go to jail? Or, am I going to work? I guess I’m going to work.” A couple of years later, he decided to go to Job Corps  in San Francisco to study culinary arts. God provided in big and small ways to get him there— a mentor working with youth helped him transition from jail even though he was too old to receive services. Then, another connection gave him an opportunity to earn the $600 he needed to pay fines by hiring him to build a garden. God even provided the will power for Clai to make it all the way downtown through his old stomping grounds from the South Hill with $600 in cash to give to his probation officer— a test Clai wasn’t sure he could pass when the temptation to use it for drugs was singing to him like a siren.

When Clai reflects on his faith and where he’s come from, he says, “[God’s] grace will let you learn the lesson. You're going to suffer the consequences for the sin, but his grace will allow you to learn it…That's been the theme in my life, you know, that God has allowed me to do what I wanted to do, and when I suffered the consequences of it, his grace got me through it. And so now, being [at UGM], now I can just give to him, let him lead to the best of my ability… I'm not homeless anymore…”

He also sees faith as both obedience and experiencing God’s Spirit, “Because I’ve come to learn that once you have Christ in you, you accept a responsibility. It doesn’t just happen.” 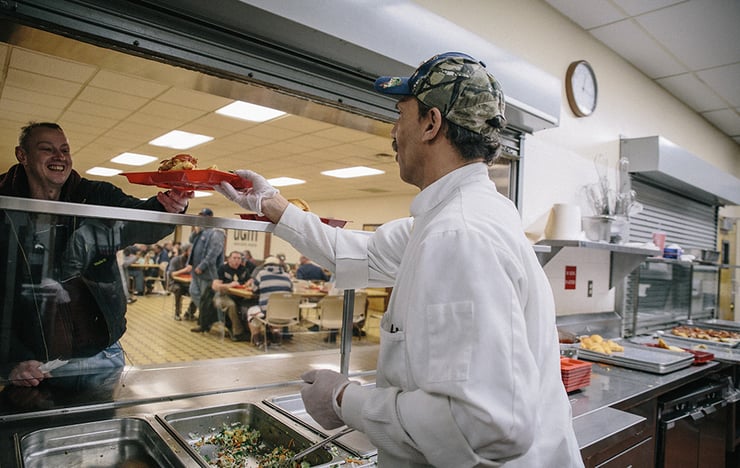 Clai has been at the UGM Men’s Shelter for about a year now. He is a great encourager and sees a deep connection between men being well-fed and being able to work on their spiritual lives.

While his boss has to remind him to slow down at times, he says this temporary position has been a good reminder of balancing his skills and experience with  humility in serving others. Before Clai came to work at UGM, many of the restaurants where he worked were high stress, high volume, and many of the workers used drugs just to make it through the day. His position at the Mission calls him to encourage and be a physical example of someone working hard in a sober environment.

“There’s only two ways to treat people: we’re either going to help them or hurt them. And so, how am I helping today? I can come to help or hurt, and I want to help…This is the first job I’ve ever had where I’m excited to come to work.”

Clai understands what it is to be homeless and that helps him to be an encourager. If you are seeking better understanding of the homeless situation, we recommend the free e-book below.

Jesus Came to Proclaim Freedom for the Captives