You may have heard us say we’re not just a soup kitchen, and while that is certainly true, it is also true that so much of what we do begins with a meal.We’re in the radical hospitality business, welcoming the stranger, feeding the hungry, providing a good night’s sleep, and communicating God’s love in tangible ways.

Food is a universal symbol of grace —an invitation to come in, sit down, satisfy your hunger, rest and open yourself up to the possibility of goodness, connection, new friends and new life. 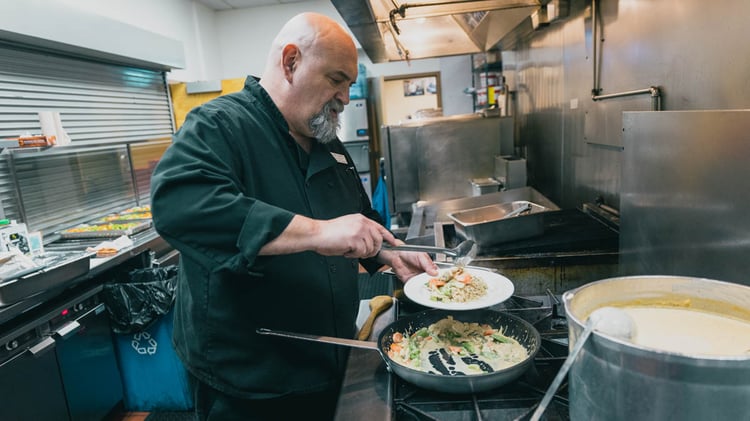 “That’s been my favorite verse for a long time,” said UGM Chef Frank Comito. “I see food as an excellent metaphor for grace. God could have made a limited number of proteins, starches, fruits and vegetables—or even just one, nutritionally-balanced food—but He didn’t. He made edible fungi and berries that range from gold to dark purple in color. He made garlic, sweet potatoes and beets that you pull from the dirt, apples and hazelnuts that grow on trees, deep orange squashes and pumpkins. God put forth this wild, abundant variety and called it good.” 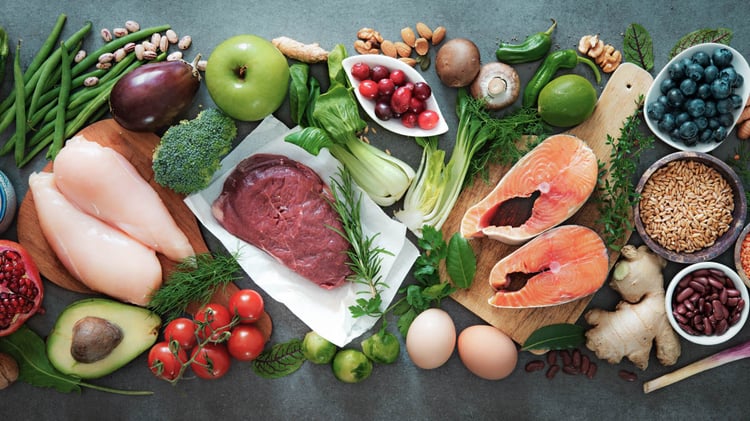 “He made edible fungi and berries that range from gold to dark purple in color. He made garlic, sweet potatoes and beets that you pull from the dirt, apples and hazelnuts that grow on trees, deep orange squashes and pumpkins.”

And when a person comes through the doors of one of UGM’s shelters—broken, angry, disillusioned—a good meal is a source of comfort. Hunger satisfied opens the mind and heart to other good things. 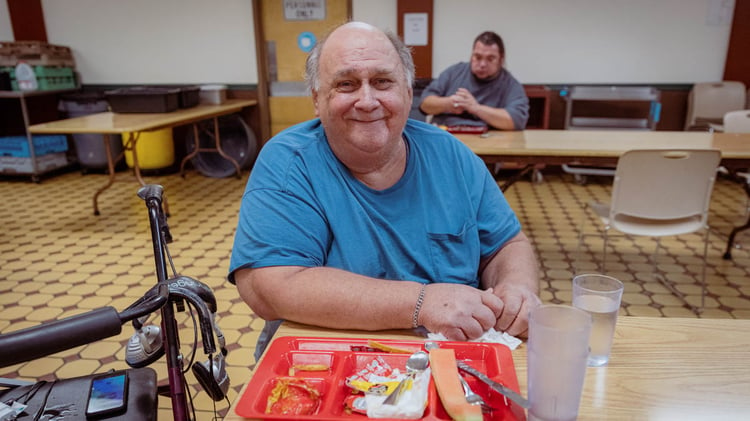 One of the unique aspects of meals at UGM is that most of the ingredients are donated.

We send out a lot of direct mail appeals, asking people to provide a meal (and more) for just $1.84. The reason the cost of a meal at UGM is so low is because of our generous food partners, businesses like US Foods (who donates 7,000 pounds of food per week), Sysco, Costco, Trader Joe’s, Safeway and Second Harvest. They provide most of the food we serve, so that $1.84 can go toward overhead, appliances, utilities, salaries, and limited purchasing of spices, butter, cooking oil and other items that do not often get donated. Anything beyond those needs helps to fund our other services, like addiction recovery and job training. Friday afternoons are an exciting time for the UGM chefs in Spokane because that’s when the largest food delivery of the week arrives. When that truck pulls up to the back of the Men’s Shelter, Chef Bethany from the Crisis Shelter and Chef Frank from the Men’s Shelter are usually waiting, along with Nick, the UGM warehouse manager and several ministry partners. The Men’s Shelter serves as the receiving warehouse for the other shelters in Spokane and the food is distributed based on each shelter’s needs.

Chef Frank is most interested in product available in larger quantities as he needs to serve 100+ guys at a time. Chef Bethany and Chef Lennon are both serving women and children (and preparing fewer plates per meal), so the needs are slightly different, and the food is distributed in such a way that everyone gets what they need.

Frank told us meal planning is a mix of knowing what’s in the freezers and coolers and then weighing what’s just been donated.

“In my 30-plus years in the business, we’ve always practiced FIFO, or ‘first-in, first-out.’ Here, we jokingly refer to FOFO, ‘first-off, first-out.’” While most of the product UGM receives is still wholesome, it is also generally close to its expiration date. It’s a definite case of “use it or lose it.”

After the Friday delivery, the chefs plot out the week ahead, but flexibility is key. Frank said he was planning to serve tacos on a recent Tuesday, but some beautiful stir-fry kits came in from Costco with broccoli florets, sliced onions, red and yellow peppers, sugar snap peas, carrots and celery. The produce looked great, but it wasn’t going to last, so tacos got bumped until later in the week. 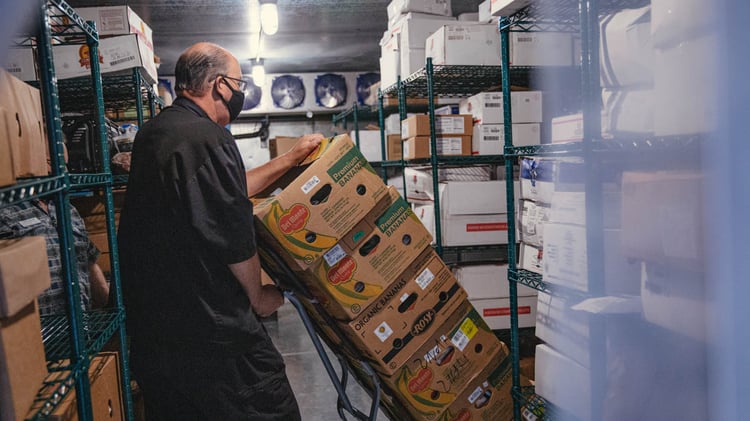 Working with new and different ingredients is a regular occurrence. Shortly after his arrival, Frank saw a product in the freezer he’d never run across before – skin-on pork shoulder. Needing to move it to make room for new product, the team decided to smoke it in…(can you guess?)… the new smoker that was just donated.

Very little goes to waste. What the shelters cannot use immediately or freeze (like three pallets of cottage cheese or two pallets of sunflower seed snacks), goes to ministry partners with a shared vision. If the product has already started to turn, it is either composted or sent to a local pig farmer.

With the popularity of food shows in recent years, the dynamics and pressure of working in commercial kitchens have gained a certain notoriety. You’re working with sharp instruments, hot surfaces, and a mistake could mean somebody loses a finger or a hundred guys get sick.

Add to those pressures the fact that most of the guys doing their chore in the UGM kitchen have never been in a commercial kitchen before, and, Frank said, you’ve got a different dynamic than he’s ever experienced. 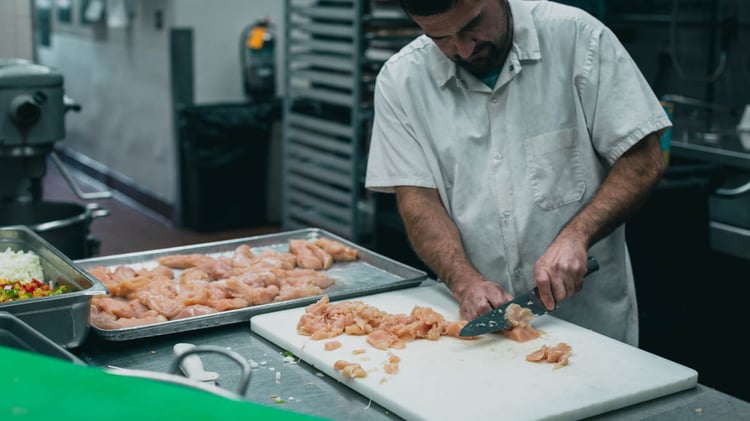 “In the past, I’ve focused most of my attention on assembling a quality crew of experienced cooks and training guys to move up from dishwasher to prep cook to line cook. Here, I’ve got a different group of guys every day. There’s training going on, but it’s a different kind of training. For some guys, it’s just getting them to show up on time, do their two-hour chore and not take three breaks in the middle of it. I find myself saying over and over, ‘Hey, here’s the deal you made: You get a safe place to sleep, a safe place to shower, three meals a day and a place to store your bag. In exchange for that, you agreed to work a two-hour chore.’ Other guys are excited about food and want to know how to filet a fish or season chicken, and some guys can run a whole shift by themselves. It’s just a huge mix.

“I don’t know if people realize that the guest population at the mission turns over pretty regularly. Seventy guys leave and 70 new guys come, so we’re running some of these services with brand new people every week.”

Frank says there’s also a training going on inside him. “I find myself caring a lot less about recognition. I want to cook good food, and I want to get it in the window on time because these guys have a ton of stuff going on in their lives. Eating a good meal three times a day is something I want them to know they can count on and look forward to.” 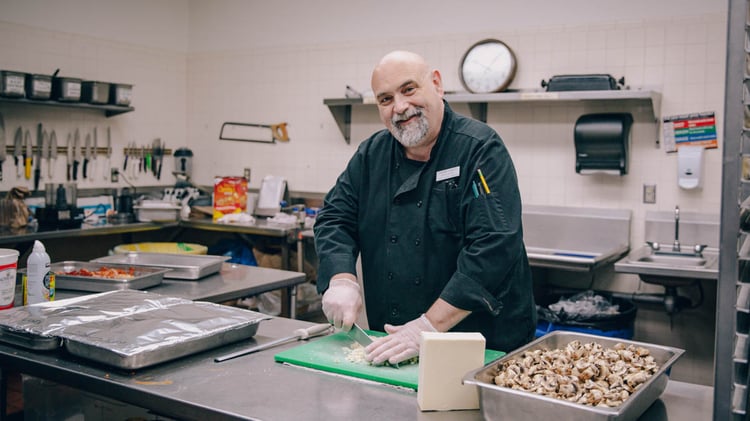 “Eating a good meal three times a day is something I want them to know they can count on and look forward to.”

Food as a means of grace. Serving meals is not the only thing we do. It’s not even the most important thing we do. But, when we do it well, it sets the stage for the love and power of the gospel to be seen, experienced and understood.

“For he satisfies the longing soul, and the hungry soul he fills with good things.” (Psalm 107:9)

Our kitchens never grow cold. Help us keep feeding every man, woman and child who comes to us hungry.

The Polarizing Topic of Homelessness [and the hot spot in the middle]
Business Owners vs. the Unhoused: A False Dichotomy
Ridiculed Schoolgirl to Heroin Addict: Johanna’s Story
The Government Agrees: "Housing First" isn't Working